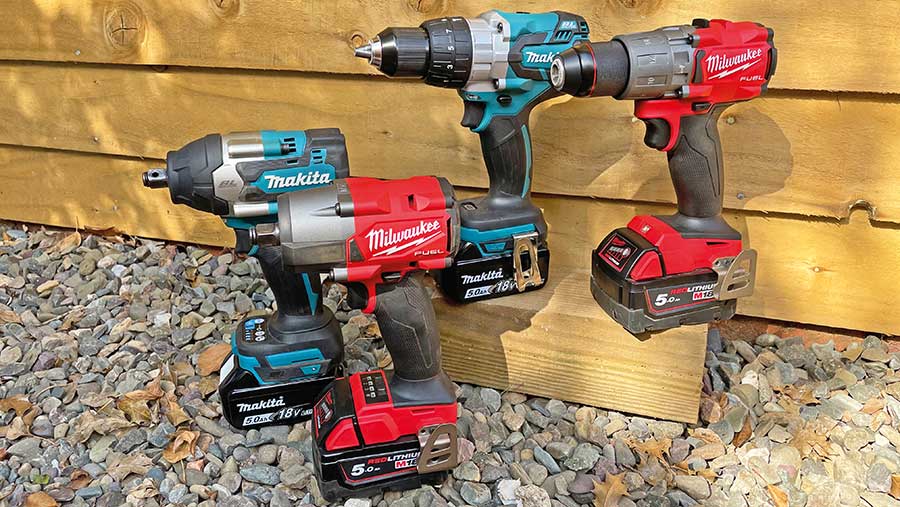 Oliver Mark and James Andrews put high-spec 18V models from two of the biggest-selling brands – Milwaukee and Makita – to the test.

There’s a vast selection of cordless impact wrenches on the market, ranging from compact 3/8in versions to massive units with 1in drive anvils.

Smaller models deal with torque of 200Nm or so (not much use for ag equipment) and the largest boast nut-busting figures of 2,000Nm or more, which is a bit over the top for most.

This is where 1/2in mid-torque machines come in. These tools are a relatively new addition to their makers’ line-ups, and they give enough power for most farm spannering jobs without being too heavy or bulky.

To see how they measure up, we put the latest models from Makita and Milwaukee through a series of on-farm tests.

These aimed to suss out their nut-busting and tightening ability as well as how much life they could eke out of their 5Ah batteries.

Both were seriously impressive for their size, but the Makita had the slight edge over the smaller Milwaukee on our test rig.

Its larger capacity meant it wasn’t working quite as hard and after the Milwaukee ran out of juice, it still had two bars of power left.

It was also more comfortable to use, as the battery can pivot under the grip to take out some of the vibrations. 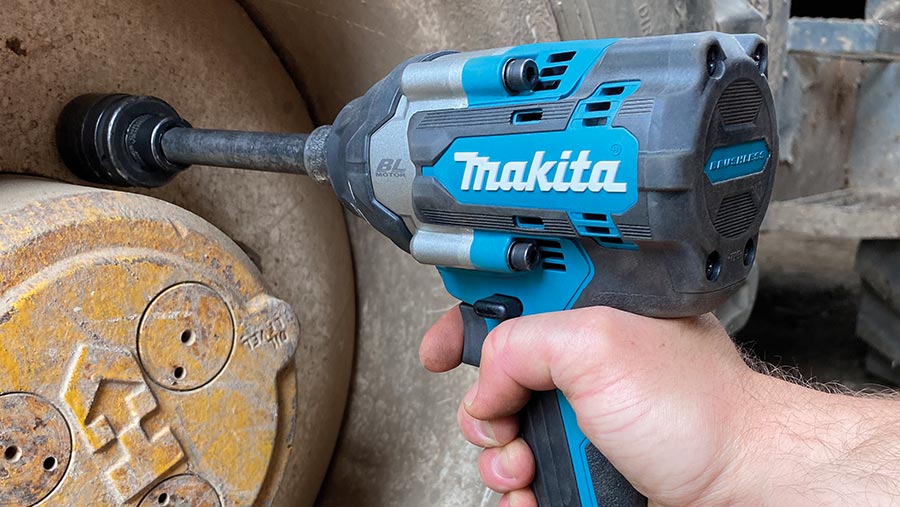 These figures put it in the same ballpark as some considerably larger units.

Users have the option of four standard torque positions in forward and reverse, plus three settings that stop the drive at different intervals after the first impact.

This feature also works in reverse to stop nuts flying off when being undone.

For working in dark corners, a twin LED light comes on with the trigger and goes off after 10 seconds. It isn’t as bright or well-positioned as Milwaukee’s, but it’s still a welcome addition.

The DTW700 was bulkier than the Milwaukee, but the additional nut-busting ability means it’s the one that would make it into our toolbox. 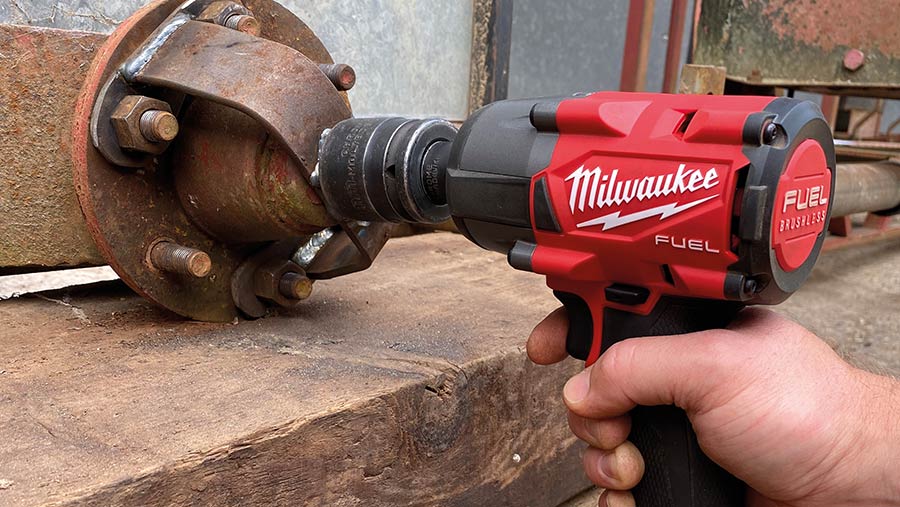 Milwaukee calls the FMTIW2F12 its most versatile cordless impact wrench, and with a torque rating of 881Nm in a package that’s not much larger than a compact, it’s hard to disagree.

Features include three-stage torque tightening – 475Nm, 610Nm and 745Nm – plus an RPM setting that shuts the tool off after it has impacted for 1sec. This helps  prevent it damaging threads.

The flat head of the wrench is home to three bright LEDs, which come on when the trigger is pulled and stay on for 10sec or so after it is released.

These LEDs surround the socket, meaning they lights the work without casting shadows.

It’s got more than enough power for most farm tasks, such as changing cultivator metal or removing large wheel nuts, and it only weighs 2.3kg.

On our test rig it managed 5min 45secs of high torque rattling in 15sec intervals before the battery ran out.

Not all combi drills are created equal, and unless you look carefully at the specs you can end up with a machine that looks the part but doesn’t deliver the goods.

For our test, we assembled the very best that the two brands have to offer ­­­­– the DHP481 from Makita, and Milwaukee’s M18 Fuel FPD2. These tools have 18V batteries, brushless motors and respective torque outputs of 115 and 135Nm.

To see what they’re made of, we timed how long it took each tool to drill holes with new 14mm masonry bits in concrete blocks and 25mm auger bits in hardwood.

We also used the timber to test battery life, by counting the number of holes each managed to drill before the battery ran out.

Both delivered impressive performances in this test with almost identical results.

However, in the concrete block hammer test, the Milwaukee’s marginally faster hammer setting (32,000 v 31,500 for the Makita) translated into noticeably quicker drilling times (4.3sec vs 5.4sec).

They were both so powerful that it was essential for us to use the clip-on side handles when drilling large holes in tough materials.

The Milwaukee’s compact size, and faster, more aggressive hammer action nudged it into the lead, but we’d be more than happy to have either. 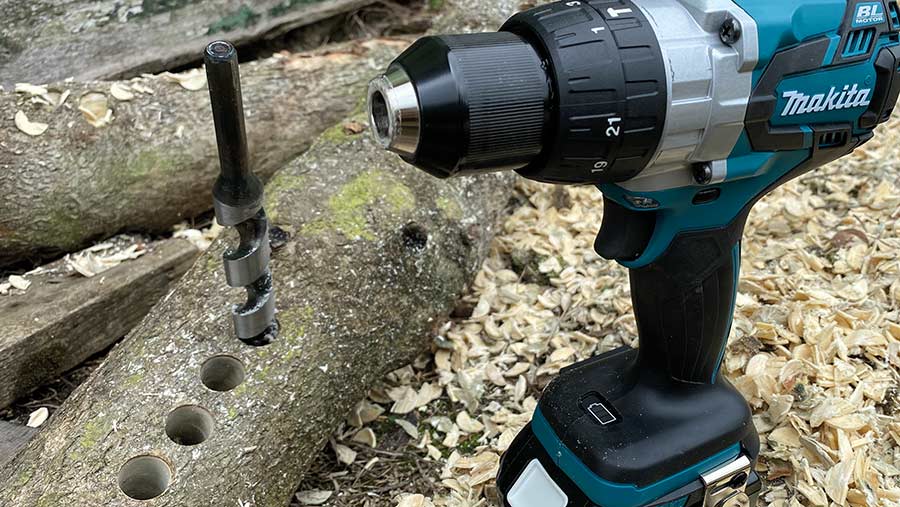 The DHP481 is Makita’s top-end cordless combi drill, and delivers a maximum torque of 115Nm from its 18V battery and brushless motor. 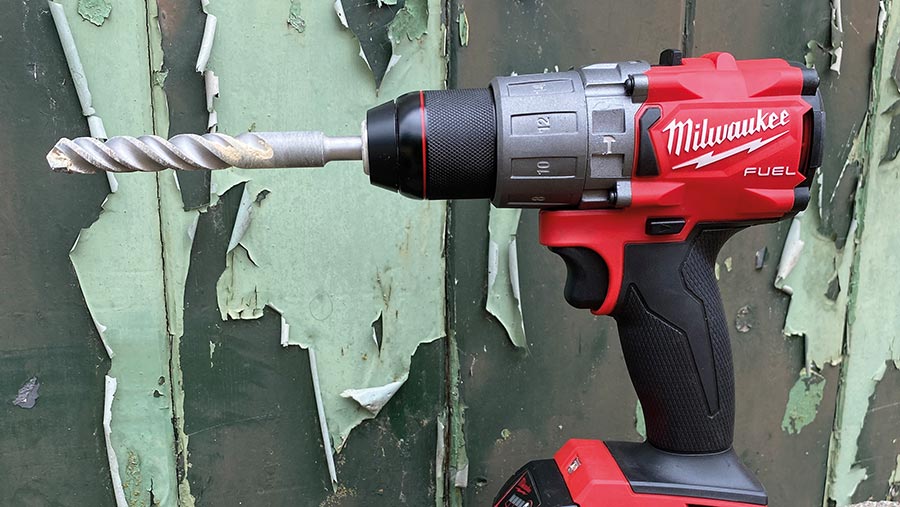 If a Milwaukee tool has Fuel stamped on the side, it’s going to be a powerful machine.

The FPD2 has an impressive 135Nm of torque and an aggressive hammer action that punched holes in concrete blocks like they were made from balsa wood. It’s a seriously powerful machine for its size. 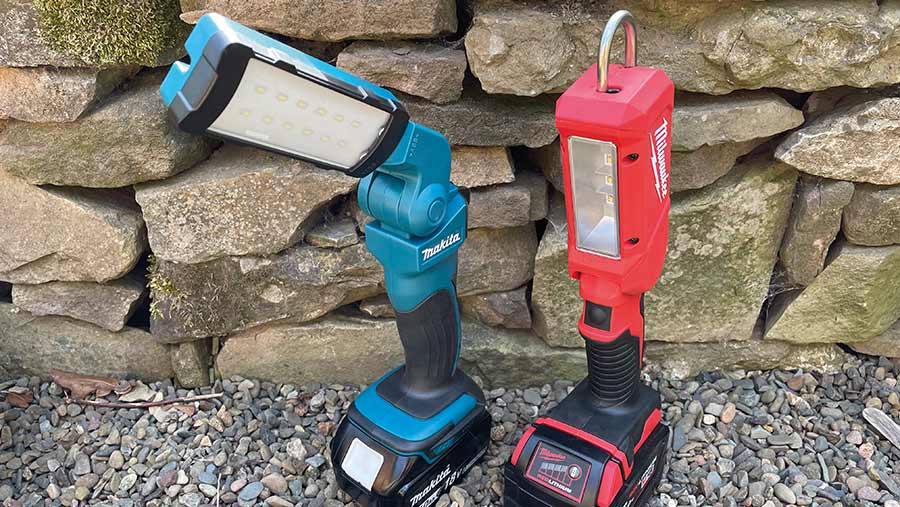 Both Makita and Milwaukee offer handy workshop inspection lights that are compatible with their 18V battery packs.

The M18IL from Milwaukee has three LEDs with two brightness modes of 300 or 130 lumens.

These are housed in a pivoting head that allows the light to be directed back and forth for 180deg coverage. Running time is 15hrs in mode one and 30 hrs in mode two when paired with a 4Ah battery.

It can be used as a handheld torch, or there are a couple of hooks that allow it to be hung in various positions.

Makita’s equivalent is the DML 801, which has 12 LEDs delivering a maximum output of 240 lumens.

Run time is 22hrs with a 3Ah battery, but this can be doubled to 22hrs when using the energy saving mode that illuminates just six of the LEDs.

The light pivots in two directions allowing the beam to be directed into awkward spots, and there’s a hanging hook, as well as a strap that allows it to be suspended in different positions.

In our tests, both delivered a similar quality of light, but the Makita offered a slightly wider beam due to the greater number of LEDs.

The light could also be better directed thanks to dual-axis adjustment of the head.