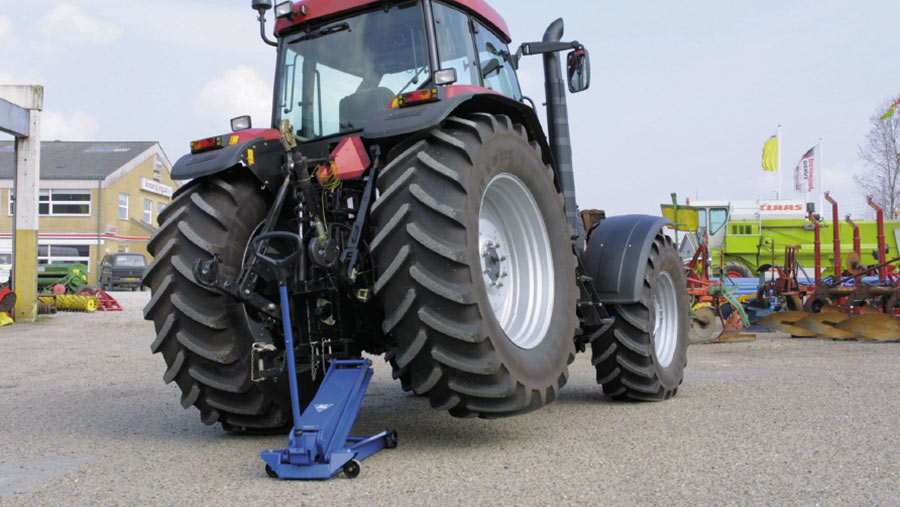 Perching bottle jacks on timber blocks or using loader pallet tines to lift farm machinery ready for wheel removal may have been the standard practice of yesteryear, but today’s heavy tractors and sprayers require something much sturdier and safer.

Though a very small minority choose to outsource the job to a local garage, many big arable farms are now geared up to change rims with Formula 1-like efficiency using long-reach lifting jacks and wheel-carrying telehandler attachments.

For those growers swapping between vegetable and cereal crops, sprayer wheel pit stops can be an almost daily task in peak season, so investment in a slick system can increase time in the field and, more importantly, minimise the risk of injury.

There are now a stack of options on the market, some of which have been designed by farmers. We have picked out some of the most popular offerings at different price points, but a quick Google search will reveal plenty of alternatives.

See also: Workshop heaters: The options and the rules

There are dozens of bottle jacks on the market with the lifting capacity to hoist most farm equipment off the ground – some of which have a 50t limit. However, the biggest issue with nearly all of them is reach, with the maximum height typically topping out at about 500mm and therefore rendering them useless for lifting the front axle from the workshop floor.

The same applies to a majority of trolley jacks, which are often better suited to working on cars and 4x4s than agricultural equipment. However, Danish firm AC Hydraulic, which makes heavy-duty jacks capable of lifting 150t for the mining and construction industries, offer a trolley-style model suitable for farm machinery.

The £945 DK50HLQ jack has a 5t lift capacity so should be capable of raising one wheel at a time, and a maximum height of 975mm, which will reach the underside of most tractors.

What is the law?

Lifting Operations and Lifting Equipment Regulations stipulate that lifting equipment in agriculture – including workshop hoists and attachments – is examined regularly by both the company that owns it and the operators that use it to make sure it is fit for purpose.

It would be considered best practice to keep a log of equipment checks so defects can be reported before use. 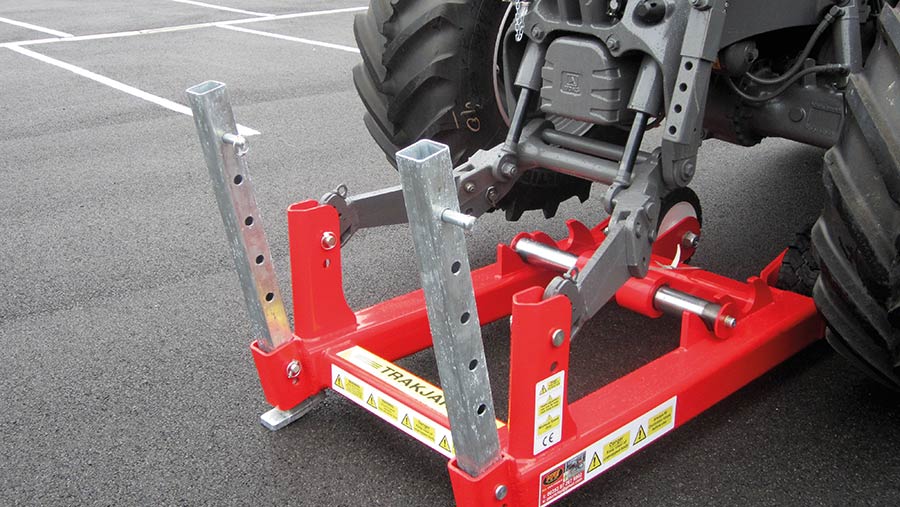 The Trakjak was designed in 2013 by farmer and engineer Pauric Fay, after he had a near miss using a bottle jack mounted on pieces of timber.

The clever device connects to the rear link arms and as these are slowly raised, the jack, which slides under the tractor, works to lever it off the ground by edging back on its own wheels. These pivot as the height increases and stabiliser bars can be attached to the drawbar, if required.

The tractor can then be driven around on the two jack wheels when its four-wheel drive is engaged. For a complete lift, an identical unit can be mounted on the front linkage, so powering the link arms down raises its nose up.

Trakjak is sold by WM Agri in Norfolk and is especially popular with dealers and contractors – particularly as it is CE-marked and Loler (Lifting Operations and Lifting Equipment Regulations) tested to a 12,000kg rating.

There are two models – the £2,850 Continental is designed for those lifting a tractor with a pick-up hitch, whereas the £3,850 Euro Pro version can work on machines without one, as a flat plate replaces the cross-bar. Prices exclude shipping, which is usually via a pallet network. 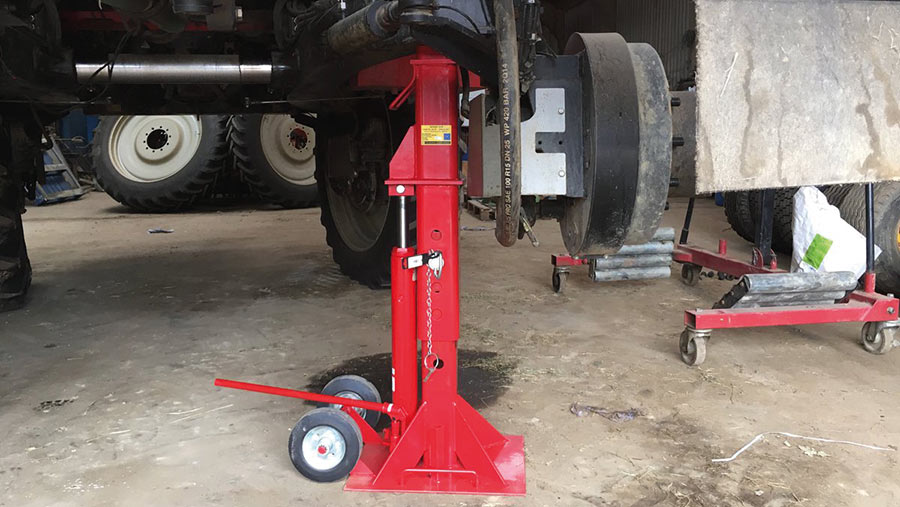 Yorkshire sprayer operator Shane Cooper developed his own system for changing sprayer wheels safely. His Sprayer Jack features a much longer stroke than a standard bottle jack and has a pair of wheels to move it into position.

At the base, it sits on a large foot that doesn’t require blocks underneath and there is a locking safety stand, which removes the need to prop the axle with stands once the machine is in the air.

Mr Cooper makes his jacks on a bespoke basis to suit the sprayer or tractor size and axle configuration, and has built models with reaches of up to 1.8m. Prices start at £485 including delivery, although shipping to Scotland costs a little extra. More than 1,500 units have been sold to date. 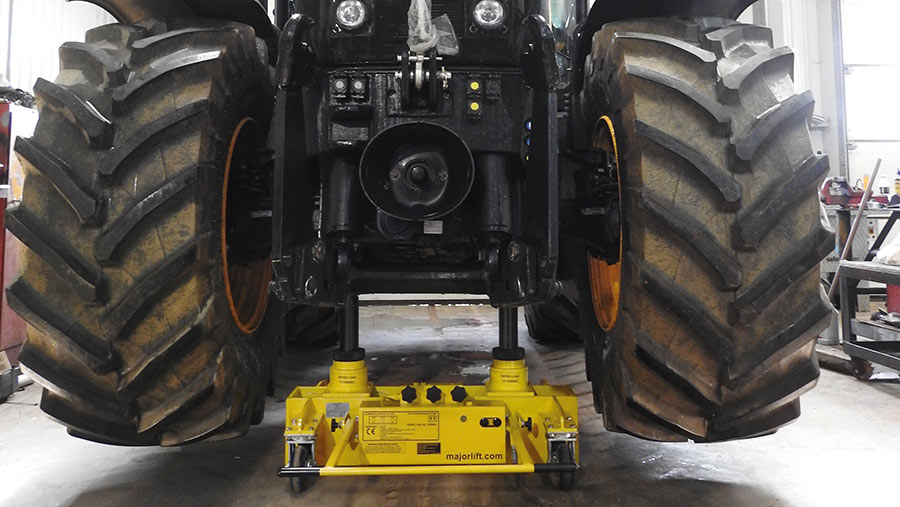 Majorlift recently introduced an air-operated 20t jack aimed at the agricultural industry. It has been adapted from units first used in military applications, but has been tested in agriculture over the past few years and was launched at Lamma 2020.

The British-built device is moved on four sprung castor wheels, which fold out of the way for jacking to start. Two air-powered hydraulic rams give a maximum height of 200mm, and with the addition of a pair of 450mm extensions and a 10t spreader beam, provide enough reach to lift a self-propelled sprayer.

It requires an air supply from a standard workshop compressor, allowing the jack to be operated via a centrally mounted power pack. A threaded collar on each ram allows these to be manually locked when they reach the required height. It costs £3,975. 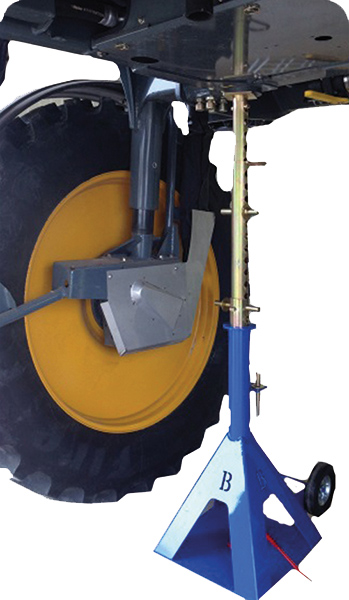 There are a number of US jacks capable of reaching lofty heights for changing wheels on sprayers used in maize crops. Bierman Sales, based in Iowa, is one such company – it has made a high-clearance sprayer jack that can universally lift any model thanks to its additional height extensions.

It features a 600x600mm foot at its base and the operator uses telescopic zine-plated tubes to manually extend in increments of 50mm up to the height of the sprayer or tractor – to a maximum of 2m. All that is required is a strong enough jack, either hydraulic or air-powered, to pump the tubes up from within the base. Once at height, it can be locked to become a stand.

The device is rated for loads up to 9t and costs $1,285 (£941). Mr Bierman has shipped to the UK before, but says the cost of freight can make things expensive.

Twin or quadruple lifting towers are a step up from the usual jacking equipment found on farms. Employed mainly by dealers and service depots, a four-tower rig can lift foragers and combines into the air with a column under each wheel. 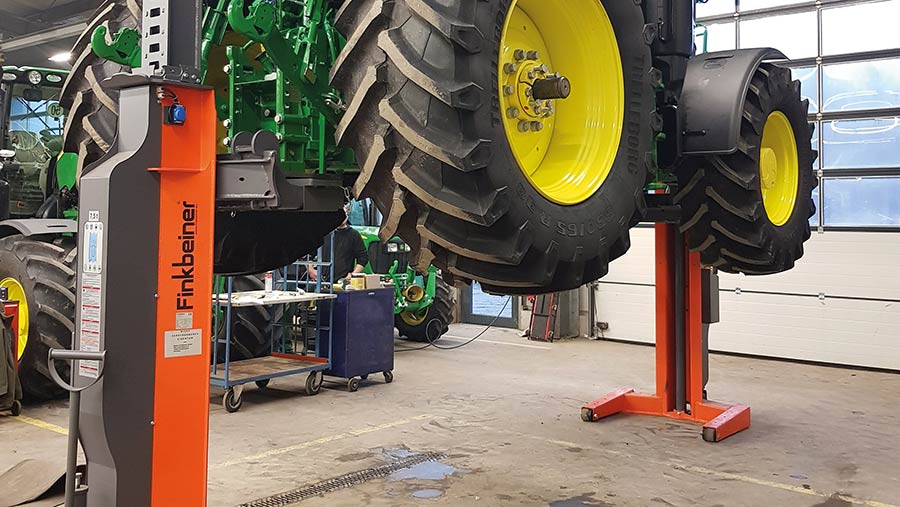 German firm Finkbeiner’s heavy lifting gear has been available in the UK for a number of years and it recently launched a twin-column lift suitable for hoisting tractors from either end. The columns support the tractor from underneath the pick-up hitch and the front linkage or tombstone.

Each column is rated to 7.5t and has a lifting height of 1,750mm. The whole cycle takes 90sec and the towers are powered by a deep-cycle 24V, 80Ah battery. It can handle 20 revolutions at full load or 30 at 50% before needing a recharge, which takes eight hours.

There are a number of adjustment plates for each column to secure machinery. These include balls and towing eyes for trailers and U-supports for some tractors.

The columns are wirelessly controlled, so there are no power cables running across the workshop, and they can be operated in pairs or individually. The cost of a set of towers, which includes delivery, installation and training, is £10,993.

If you are constantly switching rubbers on numerous machines, a fixed floor-mounted lift could be the answer. Typically, these would be found in bus or lorry garages and the biggest can hoist up to 75t.

A model that would cater for nearly all agricultural kit is the 30t unit made by AC Hydraulic, which is capable of raising machines with one front axle and up to three rear axles. It features two independent hydraulic circuits, so if one fails, the other has enough power to hold the full load in place.

Each column can lift 15t – the one at the front is fixed in position, while up to four rear units can be moved to suit the size or axle setup of the vehicle. Everything is operated via a remote-control touchscreen, which displays lifting height and load.

The cassette is sunk into the ground and measures 8.7m long by 1m wide, and it can move up and down the full 1,900mm stroke in 80sec.

The UL-2 is available from Boston Garage Equipment, based in Essex, and Liftmaster in Wakefield. It costs £40,644, but a site visit is required before any discounts or prices are confirmed.

Other firms offering similar gear include Steril Koni from the Netherlands – its portfolio covers a full range of mobile lifting towers.

Most large farms have invested in – or built their own – wheel-moving telehandler attachments to save manhandling them on and off the hub, and using levers and props to line up the studs.

There are a number of these trolley-type units on the market now, which locate on to the face of the tyre with a top arm over the wheel supported by two banks of rollers on opposite sides at the base of the frame.

The operator pumps the ram to bring the two roller banks closer and lift the wheel off the studs. It can then be rolled away from the hub and safely taken to storage, with no need to try to freewheel it across the workshop.

Lining up the holes of the replacement wheel is simple, as tiny tweaks from the ram get the holes to the right height, while the rollers make it easy to turn the tyre in situ.

A number of well-known brands produce them, such as Sealey with its 1,200kg changer that starts at about £600 online. Spaldings stocks a Truecraft unit for £783, while David Whitson, based in Cumbria, supplies a Granit wheel mover for £747.

A little add-on to the tractor and sprayer tyre-changing process could be fluorescent wheel nut indicators that are an established part of the haulage industry.

Latterly, agricultural trailer and implement makers have started to fit them to new equipment.

These slide over the wheel nut once tightened and point towards the neighbouring indicator. If a nut wriggles loose, the triangular indicator will turn, highlighting the issue.

These start at around 50p for a single item, but bulk purchasers can get a box of 100 for £30 from Tachpro online.

Fancier versions link across a pair of neighbouring nuts, with the connection broken if one of them moves. These cost less than £2 and both styles come in different nut sizes and colours.