Across the country there are welders, mechanics, fitters and fabricators beavering away in sheds and out of the back of vans to keep the nation’s farm machinery fleet in running order.

Often geniuses in their own right, we think the talents of these workshop legends need recognition. In the third episode in our popular series we visit mechanic John Towell. 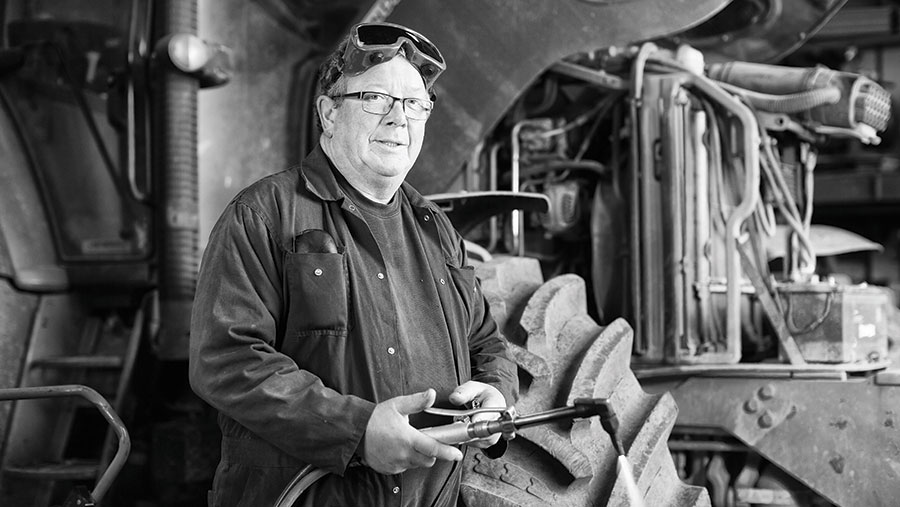 It takes great enthusiasm to get up every morning to scrabble around under filthy loader tractors, but John Towell has now done it for 38 years straight.

Based at South Farm Engineering near Thetford on the A11, he’s been responsible for keeping everything from lawn mowers to beet harvesters running sweet across mid-Norfolk.

How did you get into farm machinery?

My father always fiddled with old cars, so like most young lads I developed a similar love for the mechanical side of things.

After school, I got a job repairing and selling second-hand lathes nearby in Snetterton. It was a typical nine-to-five job, though we rarely stopped for lunch.

Then I got offered a position at South Farm Engineering. They offered me £8/week extra and I jumped at the chance to go into full-time fixing.

I quickly started building relationships with the local farmers, many of whom are now good friends. I probably have 20-odd customers who I do a lot of work for – mainly fixing breakdowns – but a few of the pig farmers also like to get me in to do the servicing.

Most of the arable guys do their own oil changes – they appreciate how much a few quid on oils and filters saves them in the long term.

Did you get your own kit?

The first thing I was given when I started was a Morris Marina and it was a shocking motor. It used more oil than petrol, I ended up walking more miles than I drove and it snapped half-shafts like carrots.

That said, I pushed it hard and we often used it as a tug for some pretty big tractors. One time I was in an International 275 being towed back to the yard – we must have gotten it up to 40mph down the M11.

There was so much slop in the track rods that the wheels were wobbling all over the place and I could hardly keep hold of the steering wheel.

A while ago I was given a Transit Connect van, which was a pig of a thing. I could hardly fit any tools in it and it gave me terrible back ache, but as hard as I tried, I just couldn’t blow it up.

I have my own set of tools, but the most useful ones are those I have made myself – a 9/16 socket welded to a ring spanner has gotten me out of jail on JCB starter motors loads of times.

There aren’t many problems that can’t be averted with a bit of ingenuity.

Another useful one is an old Massey Ferguson muck fork tine. It has been worn down through years of scraping across concrete and in doing so it has formed the perfect levering bar.

I never spend much on spanners, either. In fact, my friends often pick a few up for me if they’re going cheap at the local car boot sale because I usually end up losing them.

I suspect I’ve got through hundreds that have been accidentally kicked into the dirt while I’m working.

Do you work long hours?

Officially my hours are 9am to 6pm. Go back a decade or two and I was often out late fiddling with balers or combines, but that doesn’t happen as much anymore because there are fewer machines covering the acres.

Either way, I’m still happy to do it and, on the plus side, we rarely work more than 15 miles from home.

Almost everything I do is away from the workshop and 75% happens in a field somewhere.

Wheels fall off tractors with surprising frequency around here – pig farmers on sandy soil find grit and water get into the bearing, which then works like a grinding paste. We always find a way to get it going again, though.

Believe it or not, the jobs that have caused me the biggest headaches have been instigated by rats and mice.

A few years ago, all the electrics went haywire on a customer’s John Deere combine and it ended up taking me three days to cure the problems.

I found four rats’ nests on the same machine – on top of the diesel tank, the engine bay, chassis under the cab and among the return auger pulleys.

I later found they had also chewed all the pipes for the fore/aft header reel, so that didn’t work either.

I love getting on the lathe. I taught myself how to use one when I was a teenager and it gets me out of jail all the time.

Quite often I use it to make new hydraulic ram plungers with a chrome rod and a bit of steel. It means I can always make up the ram that I need, even if the company doesn’t make it any more.

I’m also a regular visitor to the scrappy – it’s usually possible to assemble a decent starter motor out of two broken ones.

Anything that needs doing on the side of the road is a nightmare – it’s a bad place to work.

A lot of the time it involves a tractor chewing its brakes to bits. It’s happening more often too, because they are travelling at rapid speeds with huge weights on the back. The single-disc brakes end up getting really hot and eventually disintegrate.

Usually the transmission filter screen gets blocked up first, so we pull that out and give it a clean – a job that guarantees oily arms – and then limp home.

Paul Rackham, a local farmer, put his entire vintage tractor collection up for auction in 2015. Of the 300-odd machines, he managed to get all but 78 of them running and called me to sort the rest.

In most cases the cylinders had dried out or they weren’t producing a spark so it mainly involved cleaning the carburettors and plugs. It took me a couple of weeks to get them all going, except one.

There was some wacky stuff in there, including a German-made Lanz Bulldog that started by pendulum swing.

It rocks the engine’s crankshaft back and forth rather than rotating it, eventually bumping it past the compression point – from there the engine will create enough momentum to start rotating on its own.

Are tractors getting too complicated now?

Definitely – I used to be able to mend a lot of stuff with a hammer, chisel and set of spanners, but these days it’s all about electrics and sensors.

The funny thing is that once you have peeled off the skin of software, the engine or transmission underneath is still pretty simple.

We are also up against larger dealers than before and long warranty and service packages have obviously taken the biggest kit out of our hands.

However, the computer is only as good as the man using it and, even if it tells you there is no pressure in the common rail system, you still need to know how to fix it.

What’s the secret to being a good mechanic?

The biggest part of the job is not being big-headed or too proud to ask for help. It’s important to have lots of friends in the industry that you can bounce ideas off and ask questions.

Many of them have become self-employed after working for big dealers and can give me a hand if I get stuck identifying error codes.

Perseverance is also key. Often I find I’m better off taking a break rather than staring at a problem and I probably solve a lot of jobs while I’m lying in the bath.

Sometimes that’s difficult, particularly if the job is time critical. Most mistakes tend to happen while rushing, but if an irrigation pump is sat broken down and doing nothing then it’s costing someone money.

How do you see mechanics shaping up in the future?

Sadly, there’s just not enough young guys coming through – no one wants to lay on their back in mud fixing a sugar beet harvester.

It’s a shame, because there’s so much satisfaction to be had from manual work and problem solving.