There aren’t many people that stay in one job for more than half a century, but last summer Andy Dixon retired after 50 years’ service at Lincs dealer Peacock and Binnington.

During that time, he progressed from apprentice mechanic to senior fitter and then workshop foreman.

With all his accumulated knowledge, he finally ended up spending the past two decades as service manager – a job that he fulfilled with such dedication that several customers felt compelled to nominate him to appear in our Workshop Legends series. 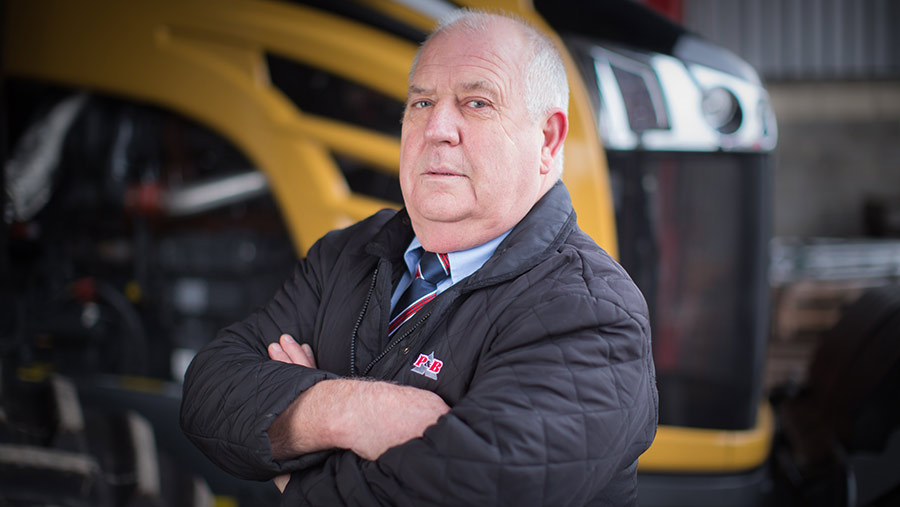 What got you into agricultural machinery?

Our family had a small farm near Brigg, but my dad had the foresight to realise it couldn’t support all of us.

I was quite practically minded, so when I came to leave school at 14 he started putting the feelers out for job opportunities.

I was lined up to go for an interview with our local Ford dealer, Lincs Motors, but when the manager at the Peacock and Binnington branch in Brigg found out he offered me an apprenticeship and from then I was destined to become a Massey man.

That five-year training programme included a day a week at Riseholme College, which was great because I mixed with other lads doing the same sort of thing at other dealerships.

What did the job involve?

Initially I was placed with the demonstration team, which was a great way of getting to know the kit we would be servicing and fixing.

It was a busy time as 1966 was the year after the MF135 was launched – they were flying out the doors and everyone wanted a demo.

After that I spent most of my time with a senior mechanic, and there is no better way to learn. Once qualified I got my own van and was sent out on my own.

One year on I was given my own apprentice and over the years I must have trained up another 20 or so mechanics.

It was a time of fast-paced developments. Massey had firmly established itself as number one for tractors and combines and at our peak we were selling about 100 harvesters a year.

At one point, if you bought a new MF combine you got a free Mini car, which made them very popular.

What are the biggest changes you have seen?

In my 50 years in the machinery trade I have seen huge changes in the kit going out on farm, with average tractor power rising from somewhere in the mid-40s to about the 160hp-mark today.

But it’s probably the technology that has altered the most. Lots of people swear about all the electronics and computers on modern machinery, but in truth it has made the business of fault diagnosis so much quicker and easier.

Where before you would have to split a tractor to find a problem, the computer can tell you what’s wrong, so the machine is out of action for far less time.

The single biggest change came with the mobile phone. It meant we were able to offer much better back-up because customers could contact us at any time, day or night.

When someone has paid hundreds of thousands of pounds for a big Challenger, they need to run it day and night and they require 24-hour service – that’s what I always tried to keep in mind.

What is the best machine you have worked on?

They were quite a machine – fantastic luggers – but the hydraulics let them down and the linkage wasn’t man enough for any plough that would match the tractor’s big Cummins motor, so we were constantly making repairs and mods to the back end.

I had many nights driving down to Massey HQ at Stoneleigh to strip parts off their demo tractors to get our customers’ machines back up and running.

The second best tractor to that was the 1200. Admittedly it was a bit underpowered, but you couldn’t beat it for traction. The 1250 had that little bit extra grunt that made all the difference – I wish I had bought one when they started coming out of service because it would be worth a fortune now.

Because we were selling so many combines at P&B, we were given the job of adapting every North American-built machine that came into the UK.

In a hangar on an airfield near Brigg we had to replace the canvas grain tank with a proper steel hopper and then fit a special cascade set-up to the straw walkers to separate out any stubborn grain.

The combines would then go back through a proper paint shop we had built so they went out in showroom condition.

Then in the early 1980s everything changed. MF’s tie-up with Dronneborg saw us selling Danish-built 27s, 29s and 31s that were designed for northern European crops.

The returns pre-cleaner meant you weren’t so reliant on the sieves to separate out the rubbish and the cabs were no longer offset with the engine booming away alongside.

What vehicles have you had?

I started out with a Mini pick-up and progressed pretty quickly onto the van version. It was amazing what you could cram in – we would often load them up with a gearbox or final drive.

As things got bigger we needed bigger vehicles and we moved on to Morris Marinas. Often we didn’t have the luxury of being able to haul kit back to the workshop.

I remember one particularly cold winter we had a Track Marshall engine blow up in the middle of a field it was ploughing. We had no way of getting it out, so we set a tarp up over the top and did a complete rebuild with the snow and sleet coming down all around us.

As time moved on we progressed on to Bedford vans, which enabled us to start carrying far more kit, such as compressors and generators.

Now, of course, the fitters’ vehicles are so much better equipped because farms often only have one front-line tractor, so it has to be fixed there and then.

What was the worst machine you have worked on?

Without doubt it was Massey’s mid-1980s 3000-series tractors – they were just a disaster zone.

Pretty quickly, every MF fitter had to become a transmission specialist and it ultimately saw Massey drop off the top spot. Sadly, that reputation stuck for way too long – recent 6400s were some of the best tractors on the market.

Your most interesting project?

For a while I was assigned to look after 20 trailed Mather and Platt pea viners that the North Lincs Growers group operated around the clock through June and July.

I had to be on call 24-7, but I loved it – I really felt like part of the team. They were unbelievably complex machines with some interesting features.

The brakes were borrowed off a Jaguar car and, running behind Massey 175 and 178 tractors, were operated by a hand lever that took a fair bit of driver skill and led to a few interesting road-related incidents.

One day when I was a junior mechanic I was moving some machinery around the yard when we were having some new offices built.

The old loader tractor I was driving slipped sideways on a piece of rubble and the raised muck-fork pierced the grain tank on a trade-in combine parked alongside. Explaining that to the workshop foreman was a bit tricky.

The EDT – electronic diagnostic tool. They cost about £7,000 apiece, but you can’t work on modern kit without them.

Initially when they first came in I was very sceptical – I didn’t think a computer could ever do a better job than an experienced mechanic.

But the modern diagnostics tools are fantastic time-savers because you only end up replacing what needs to be changed.

50 years is a seriously long time in one job. Why did you stick at it?

I have loved my job all the way through – I’ve taken pride in giving it my best. I was rewarded with an interesting, varied career and have had the chance to travel to some interesting places across the UK and as far afield as Denmark, France, Italy, Germany and even Dubai.

P&B has been a brilliant employer. They’ve let me run the Brigg workshop as if it were my own business – hopefully that was a sign that I wasn’t doing too much wrong.

Ultimately it’s all about relationships – as foreman and service manager I’ve always tried to get on well with the lads and treat them as equals.

I have found that if you treat them well, they’ll give their best to the job – they don’t mind the early starts and late finishes if they feel their work is valued.

And it’s the same with customers – if they feel their business is important to you and you are honest with them, they will keep coming back.

What advice would you give anyone starting out in the machinery trade?

It might sound like a cliché, but put the effort in from the start and you will reap the rewards. I would always look out for the lads that tried hardest and make sure they were well looked after.

Probably the most rewarding for me was a young refugee from Albania who arrived on a boat at Hull docks. He was taken in by a local farming family and came to us on work experience.

He started on as Saturday help and it became apparent that he had massive potential. He did an apprenticeship with us and qualified as an Agco master technician. He’s now service manager for a dealership in New Zealand.