The Farmers Weekly inventions competition has been running for a few decades now, and has featured everything from calf catchers and water troughs to homemade drills and pivot-steer loaders. Here are some of the highlights from recent years.

Craig Peddie has a 250-sow outdoor pig herd in Fife, Scotland. In winter the water pipes and troughs freeze up, so he used to drag around a 1,500 litre water tank and fill the troughs by gravity. However this was taking him up to eight hours a day. 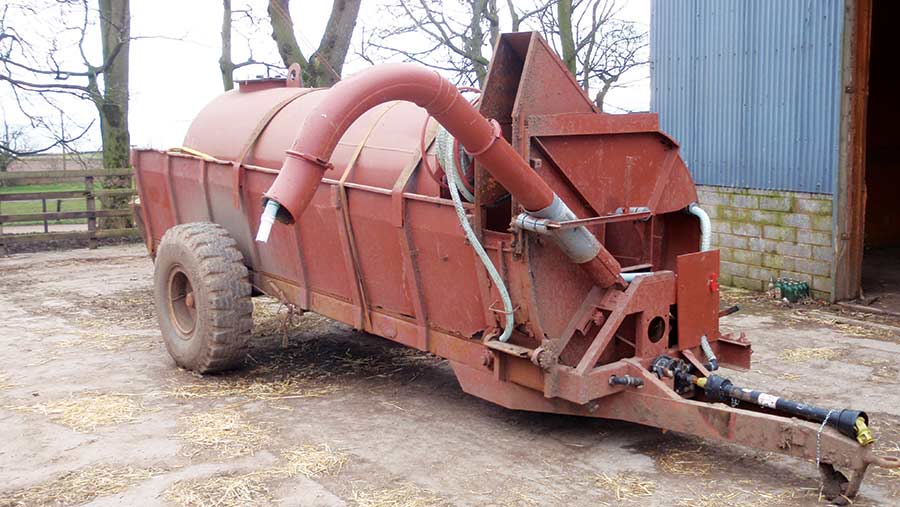 The answer was to make his own bowser. He attached a 5,000-litre water tank to the chassis of an old dung spreader, added a pto-powered water pump plus a 25m hose reel and side boom.

The side boom can be raised and lowered, meaning he can simply drive along the fence line and fill each water trough at the flick of a switch.

The water can also be diverted to the 25m hose reel, which is used for troughs a distance from the fence line or water tanks in the weaner pig accommodation.

Most people buy their forage wagons off the shelf, but Magherafelt, County Londonderry farmer James O’Kane tackled the job of producing one himself.

He had used contractors to do his silaging in the past, but felt that some of his land wasn’t suitable for the self-propelled forager his contractor was now using.

His creation is a somewhat different beast from anything else on the market. For a start, he wanted precision-chop grass rather than the longer chop of most forage wagons. So, at the front of the machine is a familiar-looking reconditioned pickup and chopper from a JF900 trailed forage harvester. 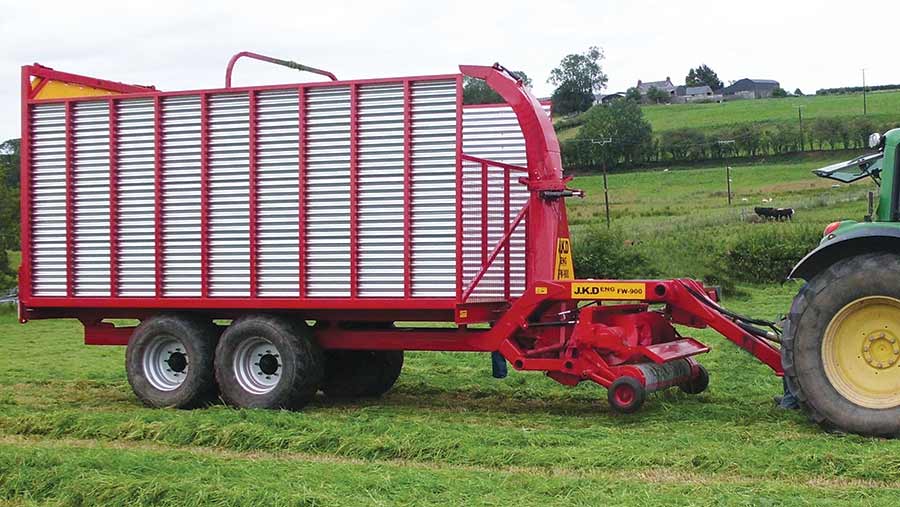 A pair of rams lift and lower it – maximum lift is an impressive 40cm (16in) – and two springs allow it to float. Behind the chopping unit is a 30cu m (roughly 10t) tipping trailer unit built from scratch.

Construction of the machine took eight to nine weeks (in between other farm jobs) and he was in time to test it on second-cut silage. He’s very pleased with its performance and a neighbouring farmer who borrowed it has said he’d like to buy it. So Mr O’Kane may have to build a second one.

Joe Willams’ silage loader can be used to load grass, wholecrop and maize silage for anaerobic digesters. It’s a standalone machine that can be positioned on hard standing to load from farm trailers into road-going bulkers.

It can load 14t in just five minutes and is powered by a 75hp Deutz engine via two hydraulic pumps from a Liebherr digger. 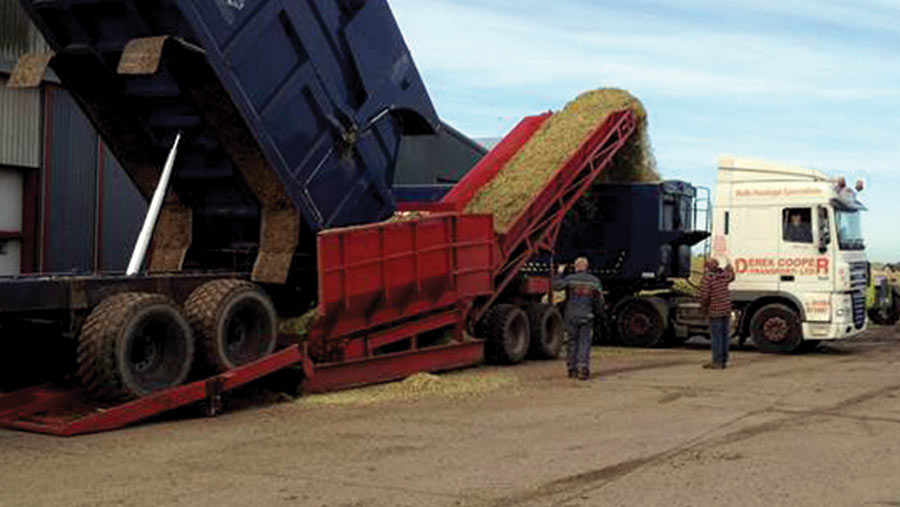 It will push a 1.8m or 2.1m post without a point as deep as necessary. 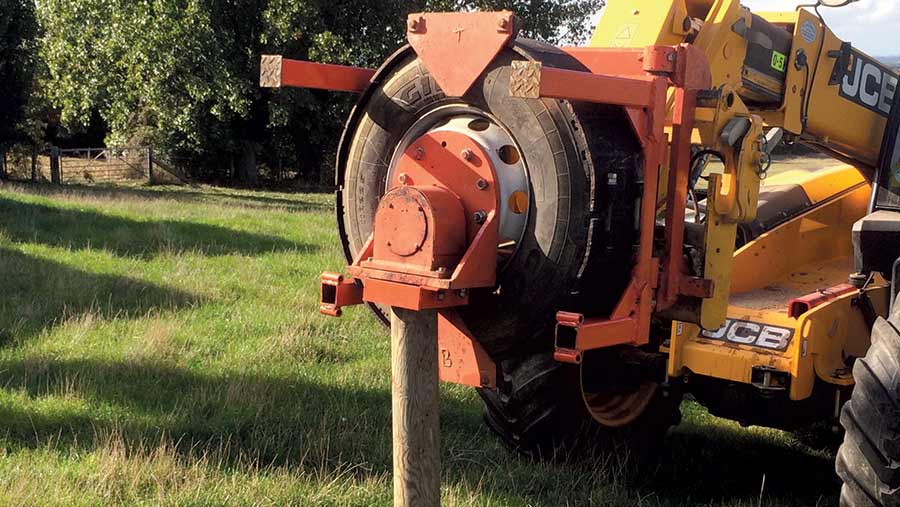 The simple machine was built using parts scavenged mainly from an old Schuitemaker forage wagon and cost less than £100. 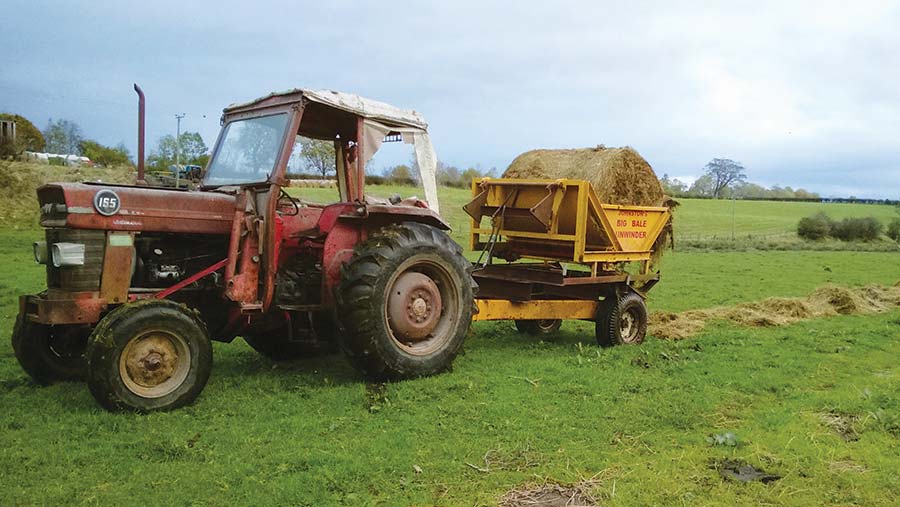 He says it has slashed the time it takes to feed and bed out and has massively reduced waste.

The machine is designed to fit on a loader and run off the tractor’s hydraulics, but he has also made a trailer for towing it behind his old Massey Ferguson 165.

Forking-up nosed-out feed was a full-time occupation at Peter Harris’ 230ha Cornish farm before he came up with his home-made silage pusher.

The simple system fits to the front end of the farm’s Ford 2120 and was knocked together using a mishmash of parts destined for the scrap bin. 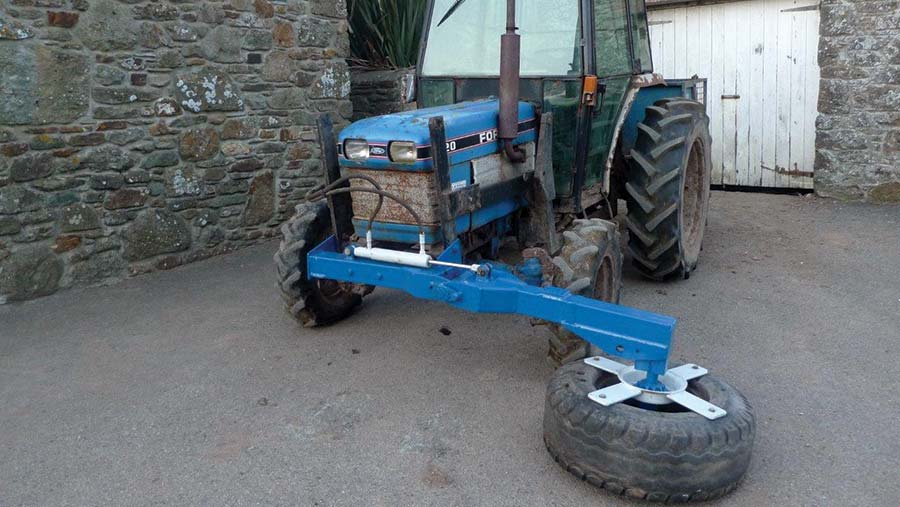 In fact, the only build bits that cost any money were the welding rods and the gate eyes that provide the ram pivot. In total it took about 10 hours to put together.

Mr Harris reckons the silage is now pushed under the cows’ noses far more frequently, which has increased daily intake for the 500 beef and dairy cows.

Chopping firewood is a popular winter pastime for many farmers, and the side business prompted James Dinsmore to design his own log holder.

The metal base and easy-to-replace wooden frame holds 50-100mm diameter logs ready for lopping, and the pallet-style slots leave space for the chainsaw blade to slice predetermined 200mm lengths. 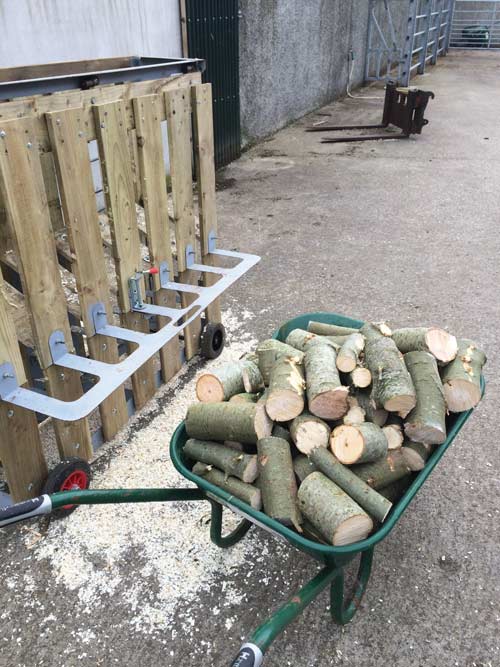 It allows up to 10 branches to be cut and ready to use in just over a minute, starting from the outside sections and working in.

Lighter branches can be held in position by cords and, once chopped, a pin frees part of the frame to swing open ready for the cut firewood to be dropped into a wheelbarrow.

When Tim Smith decided to sort the drainage across his Worcestershire farm he initially planned to call in a local contractor to do the job.

But after being quoted an eye-watering price, he reckoned a better bet would be to buy a 1980s Mastenbroek trencher and do the job himself. 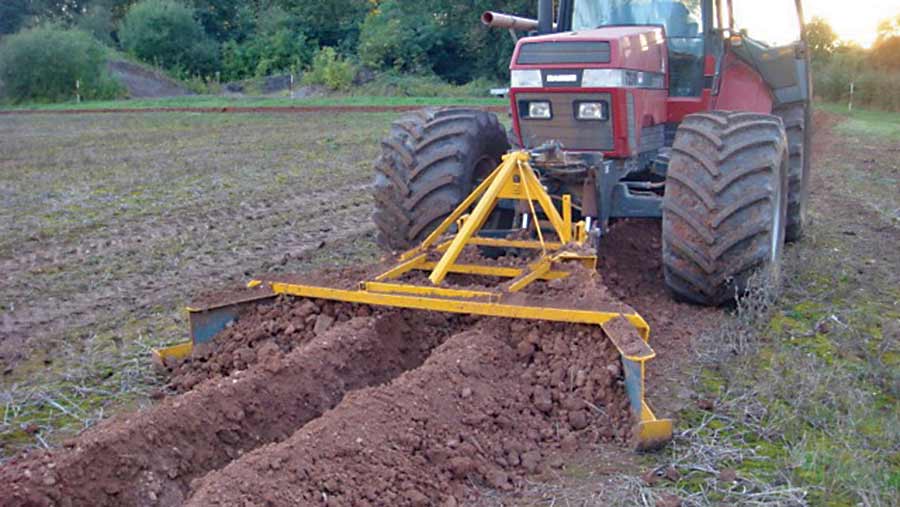 To fill the slot behind it, he headed to the workshop with a handful of recycled metal.

Two 3m RSJs form the V-shaped dozer blades of the trench filler, while an Accord hitch joins it to the front of a smart-looking Case Magnum 7230.

The tractor travels at 8kph to fill the trench neatly with two passes, and it has clocked up more than 25km filling trenches in the past couple of years.

Charlie Beattie from Loanhead Farm in Perth runs a 6m combi drill with a front hopper to distribute fertiliser during spring barley drilling.

To make better use of the hopper while sowing other crops, he decided he could fill it with seed and transfer it steadily to the rear tank.

A metering wheel on the front is put in or out of work via a hydraulic ram and means both tanks are emptied evenly on the move. 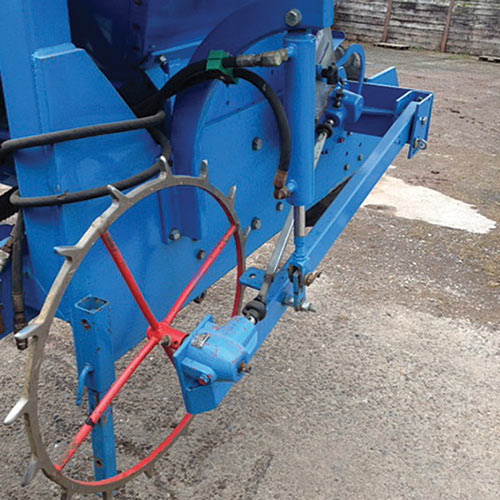 A broken cultivator leg was welded to a 10mm plate and bolted to the side of the hopper frame to form the bracket for the hydraulically controlled metering wheel.

In all, the build took a day to complete. Mr Beattie reckons the new system reduces excessive compaction, but also means he can cover 13.8ha per fill, rather than 5.5ha, when drilling wheat at 180kg/ha.

Tom Hadley built a telescopic bale fork for the front loader of his Fendt tractor.

His design means he can stack multiple big square bales at a time, but it also folds up neatly to avoid blocking his view on the road.

He can fit up to five tines in a row on the main frame, which was finished off with a lick of green paint. 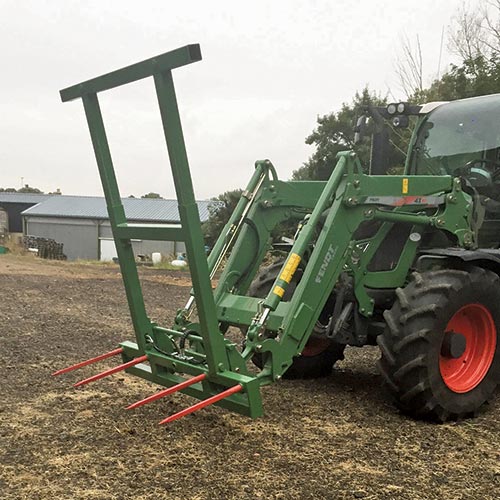 County Durham farmer and keen tinkerer Martin Bell fitted a hydraulic step to his pivot-steer JCB 407 shovel to help him climb in and out.

He removed the original step, replacing it on one side with the lifting mechanism, which he cobbled together using a couple of short lengths of box section, flat bar and steel tube.

Pivots were fitted to the shovel’s main frame and, when fully lifted by the linear actuator, the system sits well inside the loader’s width to save catching on shed walls.

A new, narrower step was fitted next to the mudguard so that other people could still climb in without having to use the lifting device.

Workshop benches are notoriously untidy, but Ieuan Evans decided it was time to put an end to the mess by building a custom 12ft worktop.

The frame is constructed from 2in box section and is connected to plated feet via lengths of threaded bar that allow for small height adjustments.

The drawers and shelves are formed from folded steel, with halved pistons making do as quirky drawer handles, while the wooden work surface does a better job of soaking up thundering hammer blows than a metal equivalent. 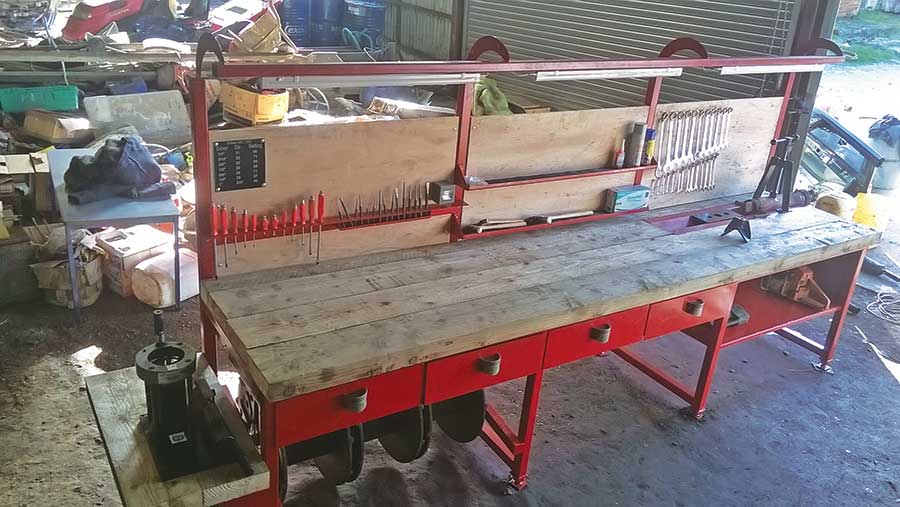 At one end, there’s a multipurpose press to push pto universal joints apart, while a clamp made from chunky angle iron helps hold rams in place while changing the seals.

At the other, there’s room for a hydraulic pipe crimper and a drawer underneath to stash all the bits required for the job. Hydraulic pipe is tucked away on reels underneath.

Regularly used tools such as spanners, screwdrivers and punches hang in their own storage slots on the back panel, while three LED lights illuminate the work surface.

Herefordshire farmer Wayne Heath’s round bale accumulator helps speed up the job of collecting hay and straw for his 350 ewes.

A hydraulically operated gate holds one bale on the rear table until the second is ready to be released, leaving bales in pairs across the field. 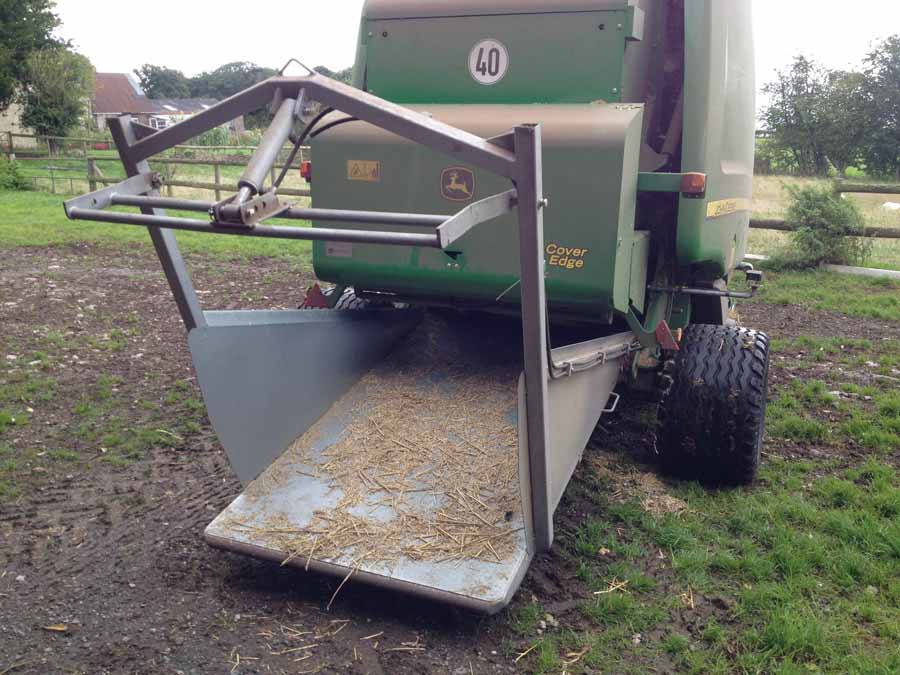 The ram is operated on a separate spool, which means Mr Heath can control the speed of opening to drop the bales precisely when working on a bank.

The accumulator is hooked to the axle of the baler, allowing it to pivot if it hits the floor. It was built mainly from odds and ends and, by the time Mr Heath had bought the ram, pipe and extra steel needed, the bill was a smidge under £200.

Undersowing maize with grass is becoming a popular way of establishing an over-winter cover crop long before autumn harvesting to reduce leaching and soil erosion.

Oliver Mackintosh spent just £500 building a lightweight drill for the job by making use of a Stocks Turbo Jet seeding unit that was already on the farm. 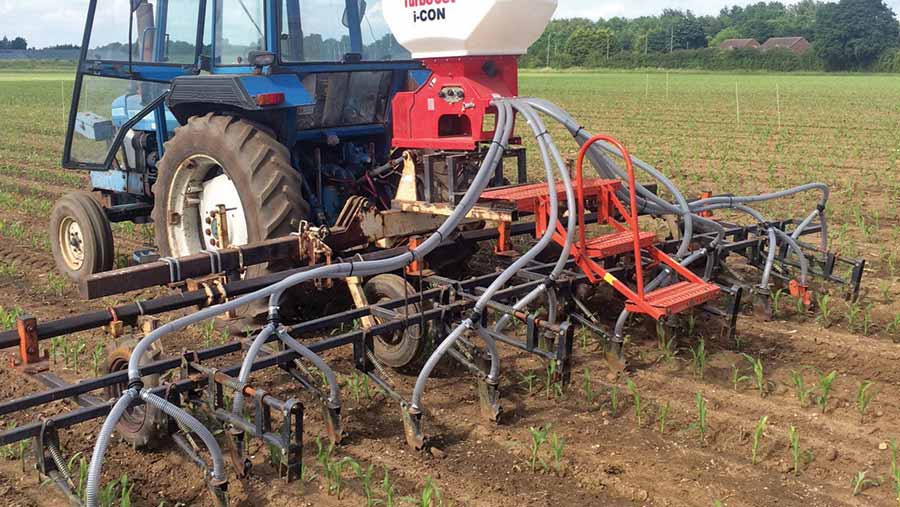 The end result was a hybrid of an old KRM piggyback seeder with Suffolk coulters, which was dismantled and the working parts relocated to a retired sugar beet drill that formed the folding main frame.

Guide wheels keep the 16 coulters at a steady working depth of about 10mm across eight rows of maize.