Be it a nifty tool fashioned out of scrap metal or a high-tech implement made from top-flight components, the innovation and quality of workmanship in UK agricultural engineering is second to none.

So much so that many of those who set up in business purely to support farmers have diversified into more specialist applications.

Computer-aided design (CAD) has stepped up the quality of drawings, ultra-precise laser cutting has improved accuracy, and working with a broader range of metals has brought in more sophisticated welding techniques.

As a result, products coming out of some agricultural engineering workshops are often of a higher standard than those produced in a conventional factory.

For farmers looking to have machines or equipment built to suit their individual requirements, these skills provide a huge range of possibilities.

We paid a visit to two such engineering firms, both of which started out in agriculture before the quality of their work attracted attention from other industries. 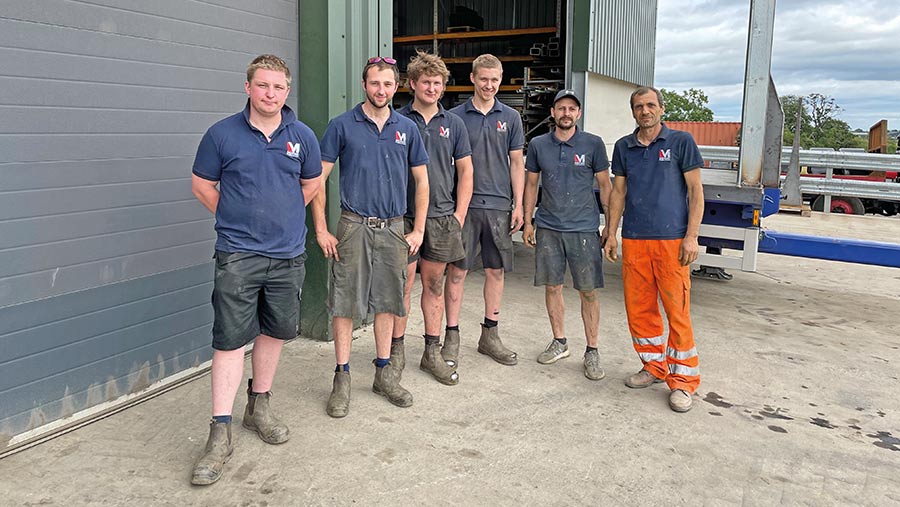 Business partners Jack Oughton and Charlie Langston set up Mocho Fabrication in 2013, while juggling building and repairing farm equipment around their other commitments.

For Mr Oughton, this was completing his degree in agricultural engineering at Harper Adams University, and for Mr Langston it was working as a Claas service engineer in Evesham.

At the time, their fledgling enterprise operated out of a small unit on Mr Langston’s grandfather’s farm  in Aston Sommerville, near Broadway, Worcestershire.

Since then, they have expanded into a 30x21m main workshop with an adjoining paint facility.

Four extra members of staff are also on the books, and they have a wide range of equipment for fabricating and manufacturing machinery made from mild steel, stainless steel and aluminium.

Mr Oughton spends a large proportion of his time designing projects using CAD and working with a local laser-cutting firm that prepares most of their metal.

Mr Langston looks after the workshop side of the business and carries out much of the mig and tig welding.

Bespoke pickup canopies and workstations have become a core part of the business. Word has spread to such an extent that they’ve received orders from Ireland and several enquiries from Europe.

The hard-tops themselves are built to the firm’s own design, with a frameless construction made from folded 3mm and 4mm aluminium plate. A neat feature is an optional full-length top-hinged door that incorporates the original tailgate.

This means the standard latch and central locking can be retained, as well as any integrated reversing cameras. 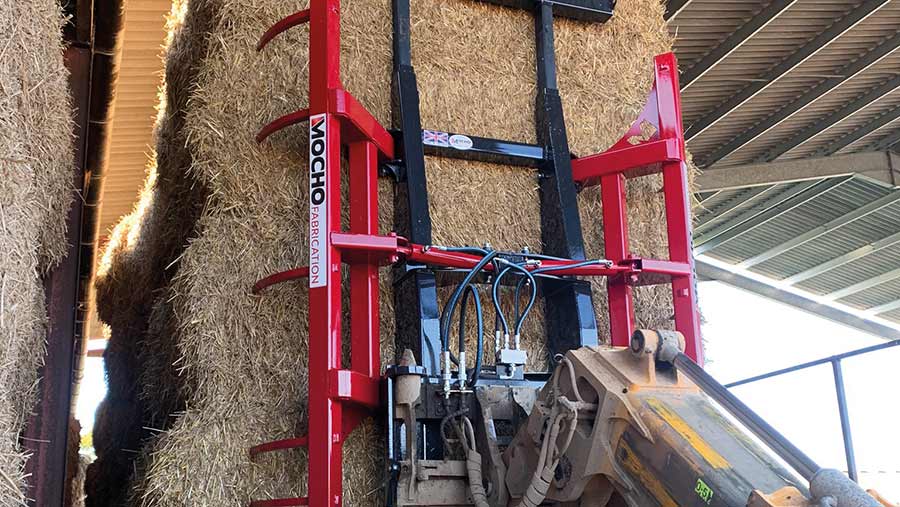 Inside, the pair offers a customisable range of drawers, shelving, vices and anvils to suit various requirements.

Although most are sold to farriers and tradesmen, these workstations can easily be configured to function as a mobile farm workshop.

Those who need more capacity have the option of removing the rear tub and replacing it with a tray back.

These can be fitted with drop sides and canopies – they’ve even made a demount version for a customer with removable legs so that it can be picked up and dropped off without any manual lifting.

A recent project for a local contractor has been to fit a custom tray back with integrated crane on an imported V8 Toyota Land Cruiser 79-series.

This will allow him to haul heavy requirement on and off without aggravating his bad back. 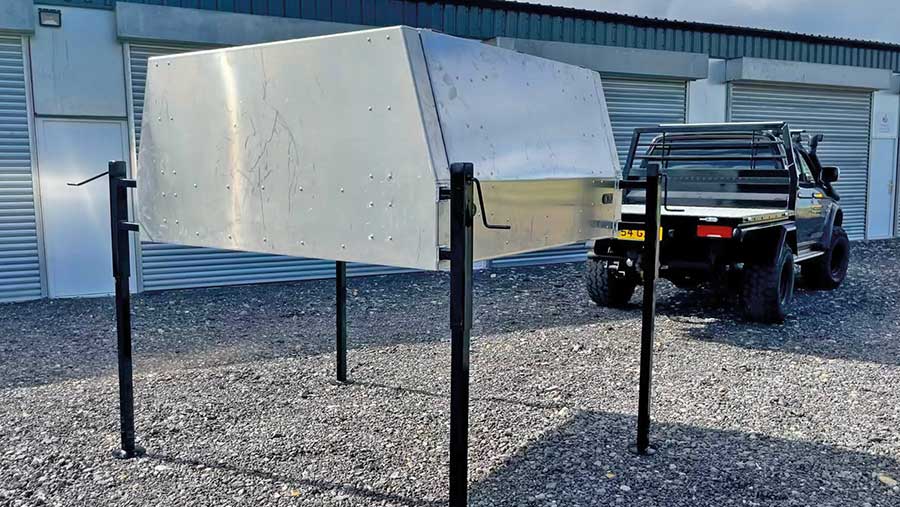 The process involves slicing through and removing the bodywork behind the front seats, leaving the main strengthening beam in place.

The fibreglass rear cab section and roof is then pop-riveted and bonded into place before being painted to blend in with the rest of the car.

These rear cab sections are available with or without a back window. 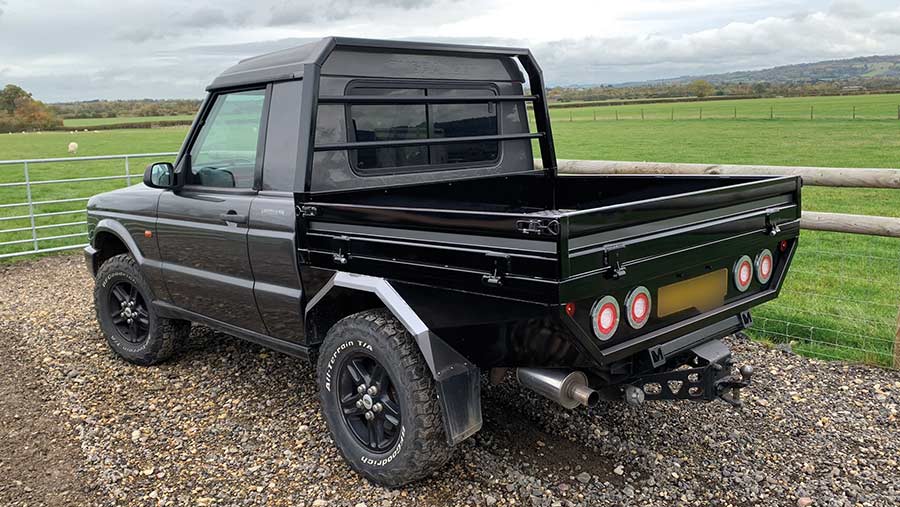 If the rear chassis section is rotten (many are), new metal is welded in, and it’s given a liberal coat of Shutz underseal to protect it from the elements.

Customers can then choose what sort of rear load bed they would like.

Many opt for the firm’s neat tray back design with a headboard and the option of drop sides and/or a canopy.

Much of the team’s time is spent designing and building custom stainless steel exhaust systems, styling bodywork and making commercial bodies for trucks.

Some of this is for the show scene, but most is for working trucks run by owner-drivers and firms with small to medium-sized fleets.

Nearly all of their customers are linked to farming, with hay and straw dealers making up a significant chunk. 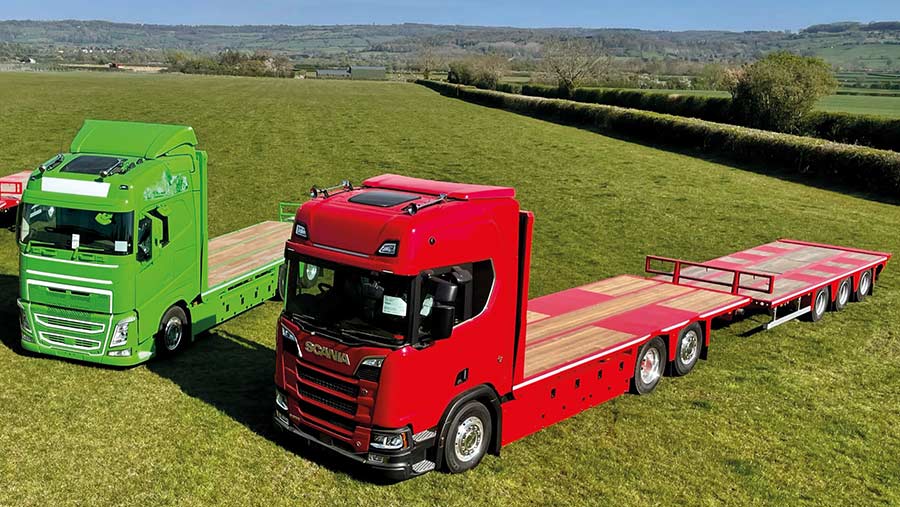 V8s are the most likely to receive modified exhausts, with both vertical stacks and side-exit systems available. However, they also make options for six-cylinder trucks.

All come with a lockable change-over valve that routes the gasses through the factory system on the road so they remain legal.

These exhausts are bespoke to suit the customer’s taste, with various pipe diameters available and the option of rolled tips. 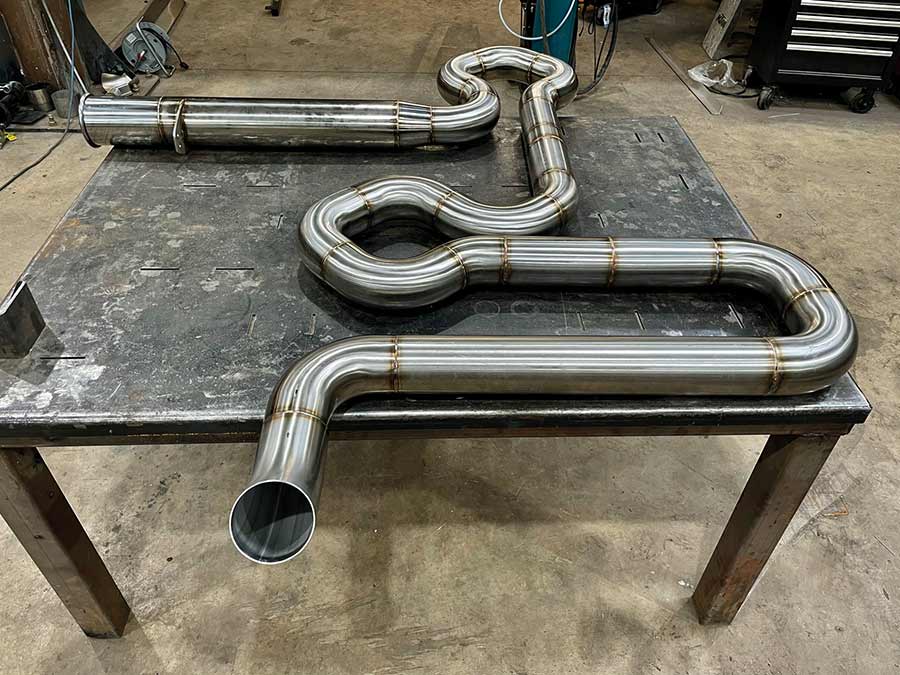 The exhaust work started with tractors, and the team still builds a few agricultural systems.

Recent projects include a Fendt 828 and Claas Xerion, both of which had custom stainless-steel pipes built up for less than the price of a standard factory option.

Body modifications are particularly varied, ranging from side lockers and infill panels to custom rear bumpers and catwalks.

With good paint facilities on site, they can also carry out complete resprays.

Both agricultural and commercial trailers are built from scratch or modified to customers’ requirements.

Recent farm-spec rebuilds include flatbeds to carry AW and Stewart stock boxes and a curtainsider for hauling fertiliser. 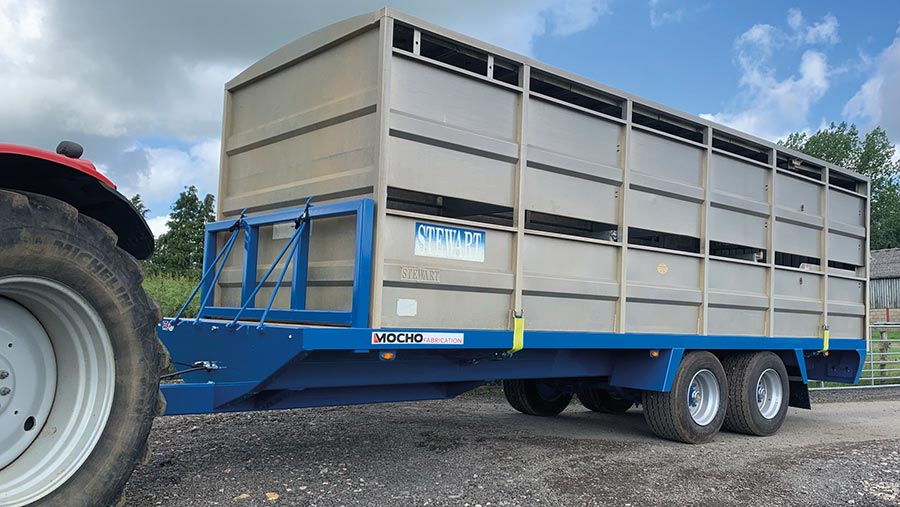 However, their most common builds are commercial lorry drag trailers, most of which go to hay and straw dealers.

These can be made to any ride height or length and come with triple BPW axles as standard.

They also have removable floor panels that give easy access to the axles, modules and pipework. 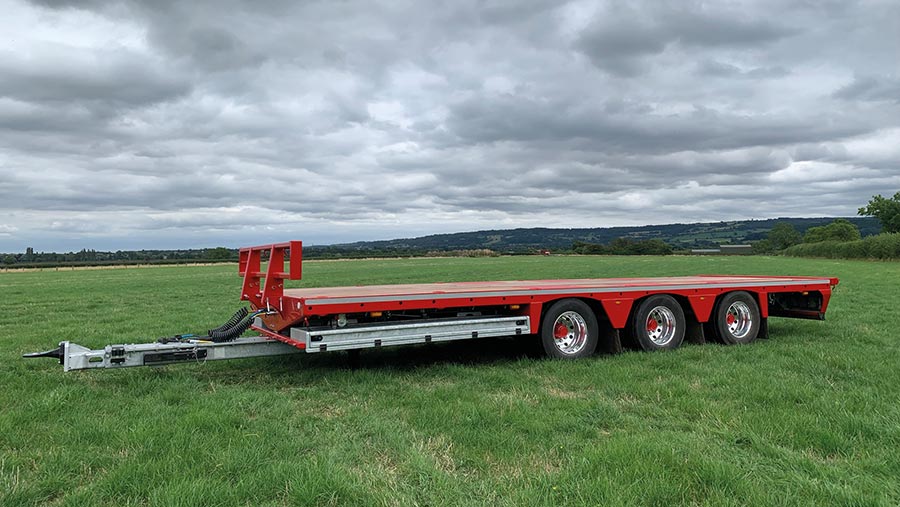 Plenty of other bespoke features have been added for customers, including chain trays and sockets to accommodate side bars for moving timber.

Standard-spec models start at about £23,000 and they can go up to more than £30,000 with extensive customisation. All are IVA tested before making their way to the customer.

Bale spikes were one of Mocho Fabrication’s original offerings and, although they’ve moved on to more complex and bespoke work, these are still available.

They are generally made to order, so customers need to book in advance to make sure they have one in stock. 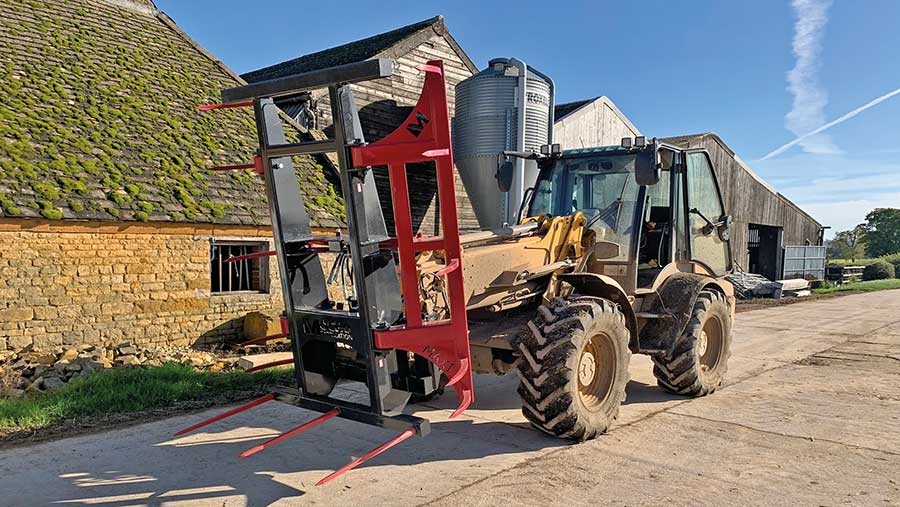 The cheapest version is a 1.6m-wide mini bale spike that costs £400, and the most expensive is the Mocho Maxi Grab that comes in at £3,900.

They’re supplied with base tines for fast stacking in the field and these can be removed so there is no need to worry about sliding them out carefully when stacking in sheds or onto lorries and trailers.

The arms have also been synchronised to ensure they enter and exit the bale uniformly.

Tony Bradley has worked for E Skinns, a 115-year-old engineering and fabrication firm based in Woodhall Spa, Lincolnshire, for 38 years.

He’ll turn his hand to any metalwork that comes his way, from quick breakdown fixes to bespoke design and manufacturing. 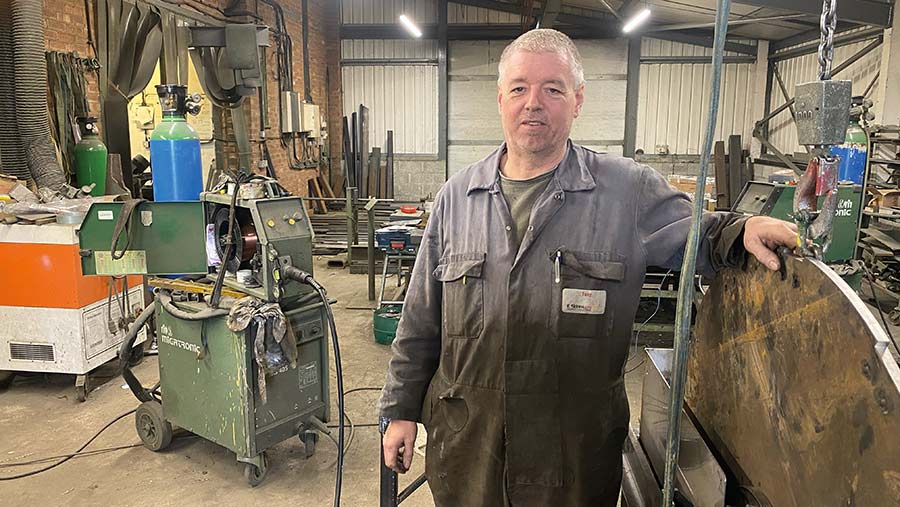 “Our market has changed a lot over the years. When we first started, it was all about repairing and modifying implements for 30ha council smallholdings, but they don’t exist in this area any longer – and the big farms that have swallowed them up now have pretty slick workshops of their own.”

So rather than sharpening knives and building 2.5m-wide, seven-tine drags and grain augers for local farmers, the primary workload now comes from producing trenchers for Shelton.

But Mr Bradley also designs his own equipment, which has ranged from grain pushers and pipe rollers at one end of the scale to a demountable trailer and auger combination at the other – all drawn up on Solidworks CAD software.

“CAD is like Lego for adults and it gives me a pretty good chance of getting one-off items right first time, which is particularly important now that 90% of the metal goes away for laser-cutting.

“It also means I can work out exactly what I can get from a length of steel.”

The 800sq m workshop is kitted out with heavy-duty folders, a guillotine, Sibora plasma cutter, four Migatronic welders, a milling machine, lathe, pillar drill, 100t press, electric hoist, and two hydraulic packs to run machines up without having to use the forklift.

The two are closely linked, with E Skinns owner David Shelton having originally bought the company in 2000 to increase production capacity of Shelton drainage machines – a business he later sold.

The range has mounted and trailed models with different output capacities, including the Supertrencher 560 that is assembled in the Skinns workshop. 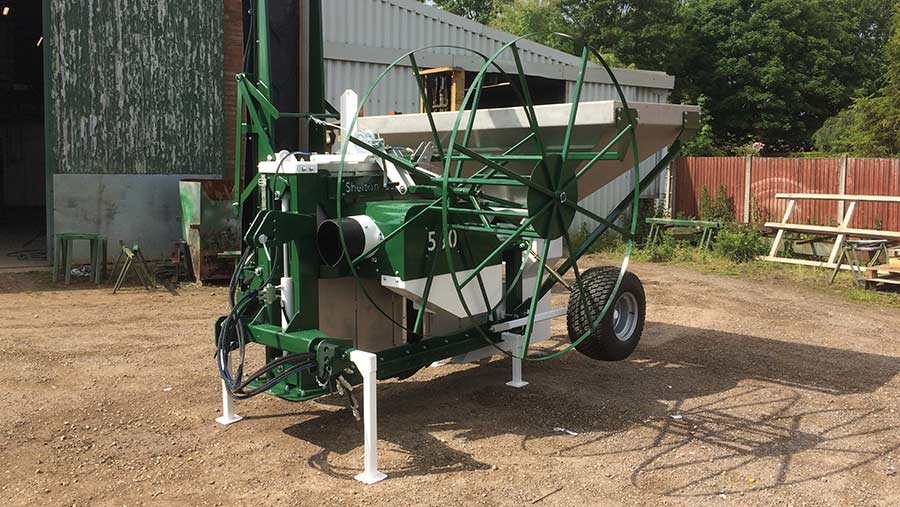 It will dig channels 50-135mm wide and 200-560mm deep using tungsten carbide cutters powered by the tractor’s pto via a gearbox and chain drive.

The build features plenty of laser-profiled stainless steel and Mr Bradley also designed the 3m-long, fold-out conveyor to carry spoil away from the trench.

Forward speeds are typically little more than 0.3kph, so the tractor – of approximately 80hp – needs either a CVT gearbox or set of creeper speeds.

Mr Bradley recently switched to two-pack paint finish for the rams, gearbox and bearings, where they can’t be powder-coated.

Each machine takes roughly three weeks to build, and some are exported to the US and Europe. 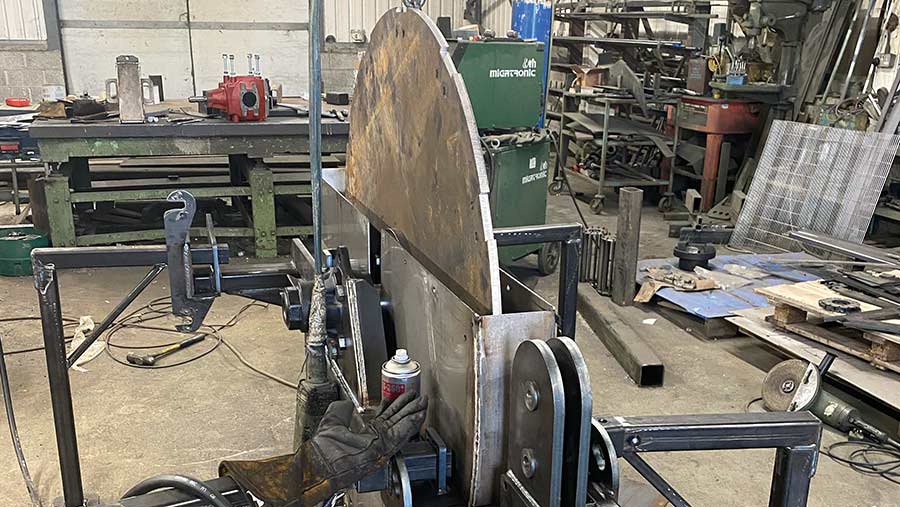 It was based on a 14t Wootton trailer chassis, for which E Skinns designed a demountable V-shaped hopper to carry bulk loads of seed out to the drill – avoiding the risky business of staff standing under heavy bags. 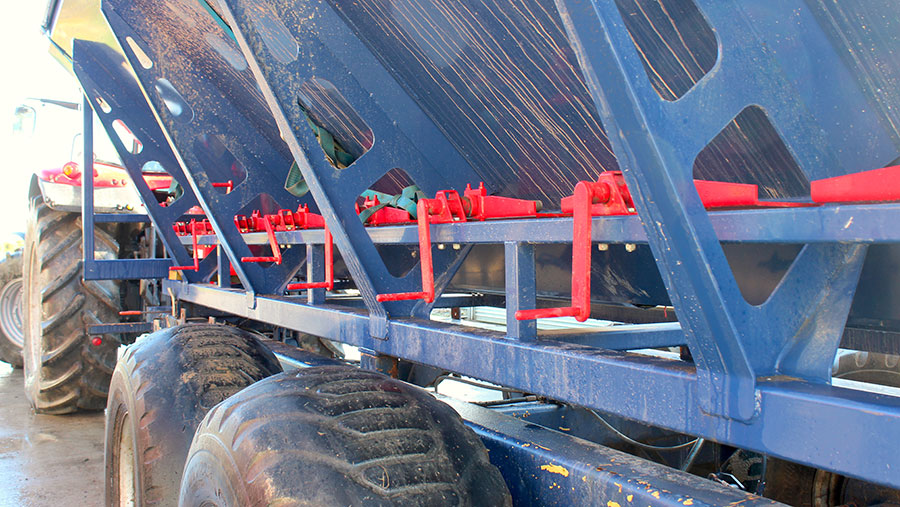 In the gully at the base of the hopper is a 6m-long auger, above which are shutters to adjust seed flow.

This transports material to vertical and spout augers, both of which were recycled from Massey Ferguson combines.

Once the design was completed, the sheet steel was laser-cut and folded, ready for Mr Bradley to weld the jigsaw of components together. This took up one of the two on-site workshops. 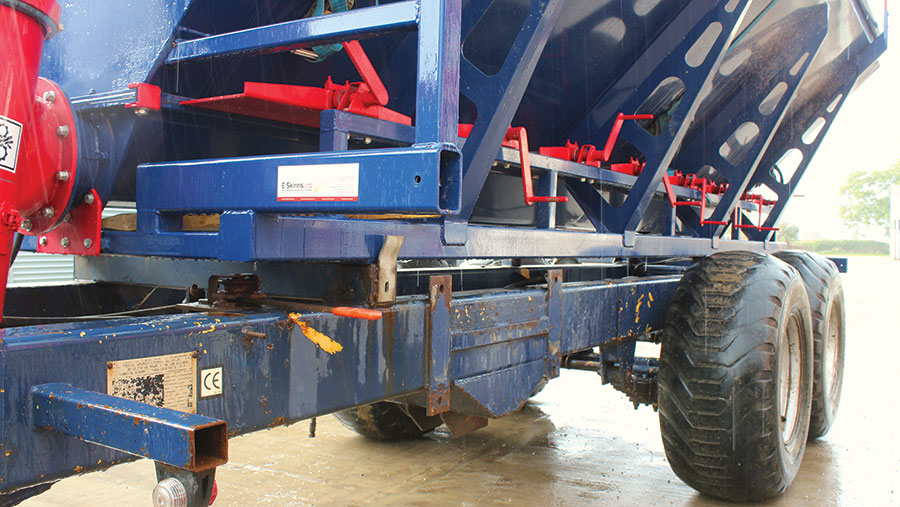 One of Mr Bradley’s less-complicated designs is an implement for filling dumpy bags with logs, which was requested by Stourton Estates, near Horncastle.

Made to fit a Manitou headstock, it features a bucket blade on the front and a rubber flap that folds the bag up as it pushes into the heap. This opens back out again as the telehandler boom is lifted.

Despite having a workshop filled with equipment, one of the most useful items is a tool trolley that can be parked up alongside Mr Bradley’s workpiece.

It’s filled with all the common nuts and bolts, a spanner set, sockets and hex keys, and came about after the business did a time and motion study that showed engineers were wasting hours each week looking for equipment in cabinets and trays dotted around the workshop. 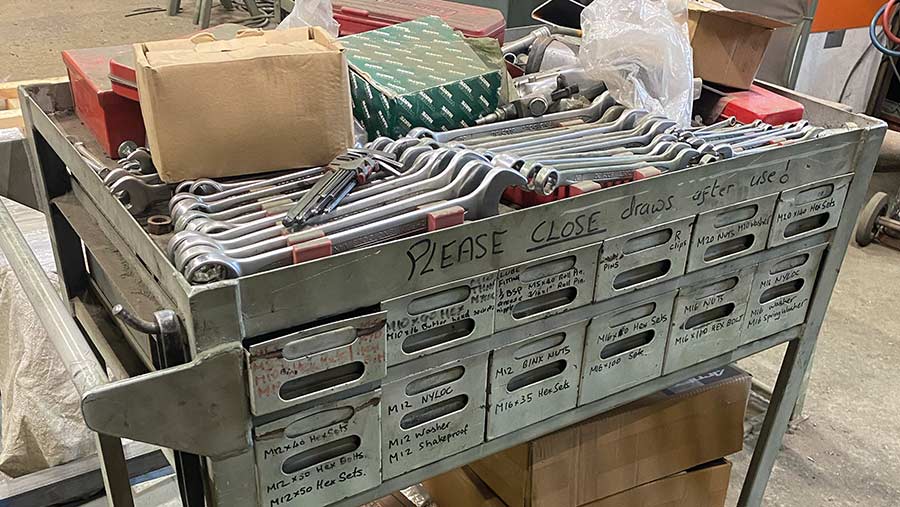