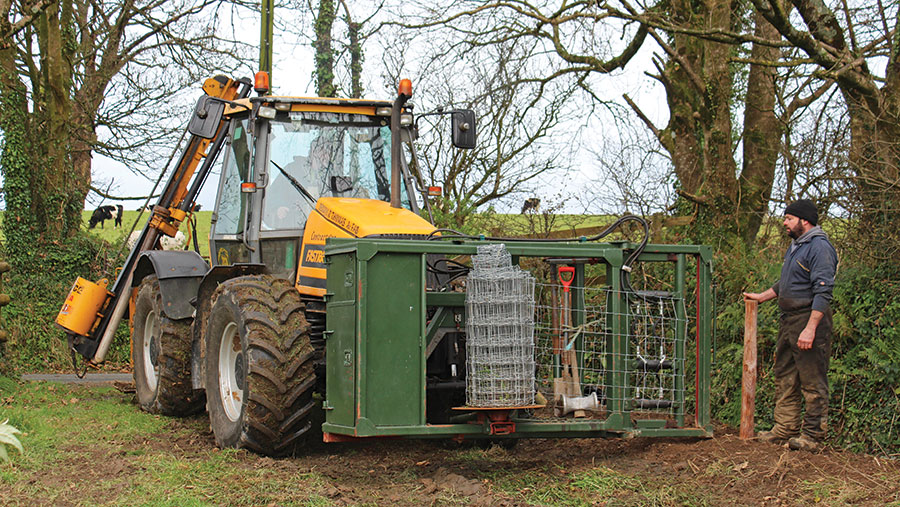 Over the years, our annual Farm Inventions Competition has yielded a bumper crop of farm-fettled fencing tools and nifty hedge-taming equipment. We revisit a few of the highlights.

See also: Inventions competition 2019: Drills and cultivators on a budget

Rhodri Thomas has been erecting stock fencing in Pembrokeshire for the past fifteen years and has fabricated a front linkage-mounted wire unroller and tensioning tool to help speed up the job.

Before embarking on the build, he looked into buying a machine and eyed up a number of options, including the Lancashire-built Quickfencer.

However, none had the particular range of features he was after, and he figured he could build a bespoke machine to suit his requirements for a lot less than an off-the-shelf product.

His main requirement was that the tool could tension the wire without having to drive past the post – this meant he would be able to work easily up to obstacles such as water troughs.

Therefore, the starting point was to come up with a slim, hydraulic clamp that grabbed the wire right down on the fence line. His design has a piece of tube on the inside edge for the wire to run over smoothly while it’s been rolled out, and a length of flat steel on the far side for the wire to clamp against.

When the wire is ready to be gripped, the tube is pushed against the section of flat steel using three hydraulic rams. These are spaced closer towards the bottom of the clamp to account for the larger number of squares in the lower half of the netting.

Once the net has been tensioned, one side of the clamp can be removed to free it.

Generally, the clamp is swung to the left of the tractor and it is driven forwards in creeper box to tension the wire.

However, Mr Thomas designed the frame so it can be swung to the right side, too. The frame also folds neatly in half so it is narrower than the tractor when driving down the road.

Added features include a netting reel that folds down hydraulically so to allow rolls to be loaded easily. It’ will hold up to 500m of netting on the spike and there is space for a 300m roll on the side.

Inventions competition is open for entries

If you are already using a home-made bit of kit that has saved you money or made your life easier, we’d love to hear from you; and you could be in with a chance of winning some cash.

Our Farm Inventions Competition is now open for entries, with a total prize fund over the three categories – simple, intermediate and complex – of £2,550.

Deadline for entries is 31 January 2020, so if you have always had a niggling design that needs to be bought to life, then now is the time.

Send a few words about the design and how you built it, along with a few pictures and some contact details, to oliver.mark@proagrica.com or get in touch with us via Farmers Weekly on Facebook or @fwmachinery on Twitter.

The tool is mounted on the front linkage of his JCB Fastrac 1135 and runs off one of its two spool values – the second is reserved for a Bryce Suma post knocker.

Because this oil flow has to be shared with the front linkage rams, he had to fit a manual diverter to switch between them.

To direct oil to the three different hydraulic services, he also added a spool block salvaged from an old block cutter – one service is used for the hydraulic top link, one for the wire holder and one for the rams on the clamp.

Finishing touches include a pair of tool lockers on the side and slots for a bar spade and mallet. It’s also mounted on an A-frame so it can be hooked up and dropped off quickly.

Mr Thomas built the rig out of new metal and the rams for the clamp were new items sourced from Flowfit.

The only second-hand parts were the wire reel ram – salvaged from a scrap yard – and the spool block mentioned earlier. All the pipework was new and put together by local hydraulic fitter Rodney Jones. 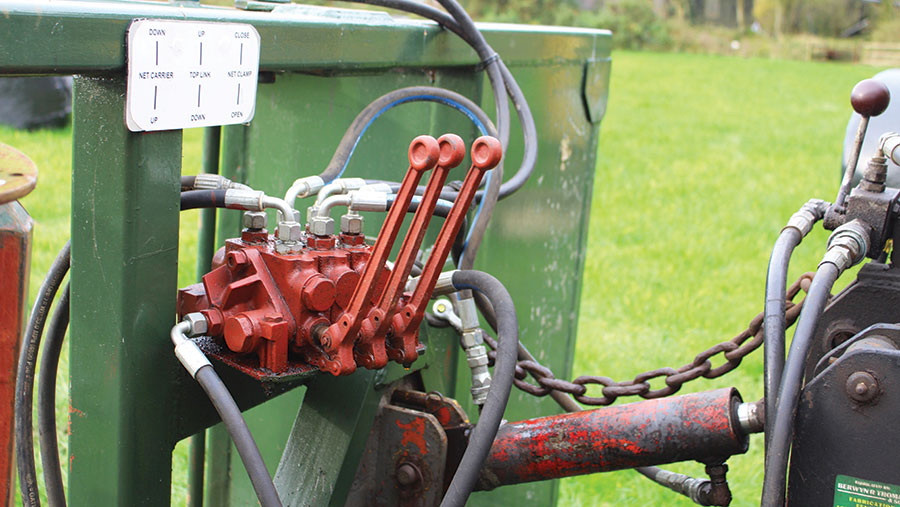 Controls of the wire unroller

The project took about six weeks worth of evenings to complete and, all in, it cost less than £1,000.

Mr Thomas is based on an 3ha smallholding in the Rhos-hill hamlet in east Pembrokeshire, and runs a mixed contracting operation trading as Berwyn R Thomas and Son.

His winter workload is dominated by hedgecutting and erecting 6,000-7,000m of agricultural fencing, which he does with the help of his second cousin, Emyr Thomas.

Rather than shell out the best part of £10,000 for a top-end post knocker, Carmarthen dairy farmer Rhodri Thomas (completely different chap to the one above) built his own for less than half the price.

His previous machine was an old and fairly basic Parmiter, which did the job, but was a little limiting for larger runs.

Before embarking on his build, Mr Thomas studied the various machines on the market and took the best bits from each, as well as adding a few of his own embellishments.

Features incorporated in his design include a telescopic mast that tilts in four directions, side shift, back shift and a pair of hydraulic stabiliser legs.

The weight itself is 400kg and was an offcut of a large-diameter bar sourced through his steel supplier.

To make sure he has easy access to his tools while out on fencing jobs, he fitted a chainsaw carrier, large toolbox and custom holders for a bar, sledgehammer, shovel and spirit level.

He also added a towing ball so he could hook a flatbed trailer on the back for carrying stakes and netting.

Once all the steelwork was in place, Mr Thomas took the machine to his local hydraulic parts supplier, Davis Harries and Co, in Whitland, to get the spools and pipework fitted.

Its key components are a pair of wedge-shaped spikes that the operator pokes behind the wire trapped by the staple.

By pulling down on a handle, the tool’s jaws close, forcing the wedges down and popping the staple out.

According to Mr Hughes, its gentle operation means it doesn’t damage the wire. It’s worked so well that he’s gone to the trouble of getting it galvanised to make sure it lasts.

Serial inventor Cyril Patterson came up with his own take on the wire unroller and tensioner, which he fitted to his 2.6t mini digger.

The key components are a pair of hubs and the handbrake arrangement from an old Vauxhall Vectra. 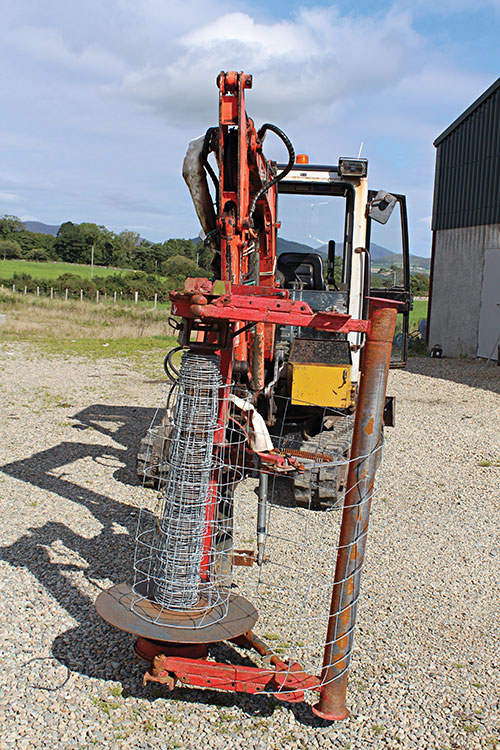 These are mounted at either end of the wire reel, allowing it to spin freely as the wire is rolled out.

To tension the wire, the handbrake is applied, which stops the hubs spinning, and the operator backs up with the digger to apply the pressure.

The tool accommodates one roll of netting or two rolls of barbed wire.

Overgrown hedges have caused little turmoil for James Tarry since he fashioned a grab attachment for his mini-digger-mounted Spearhead saw.

This means he can cut unruly growth and move it out of the way in one operation, where previously he had to enlist the help of an additional machine and operator.

Key to the tool’s operation is a neat two-in-one bracket that allows the saw head and grab to work together.

The tines are mounted at 90deg to the cutter, so while the saw works parallel with the ground for squaring off the top of hedges, the two tines slip either side of the digger’s main arm, keeping them well out of the way.

However, once the branches are cut, he can quickly operate the bucket tilt function on the digger, which lifts the saw head out of work and brings the grab into play.

The curved tines then allow him to scoop up the brash and deposit it behind him, ready for burning.

Mounting the rig to an excavator provides plenty of reach, which keeps the cab a safe distance from falling boughs. 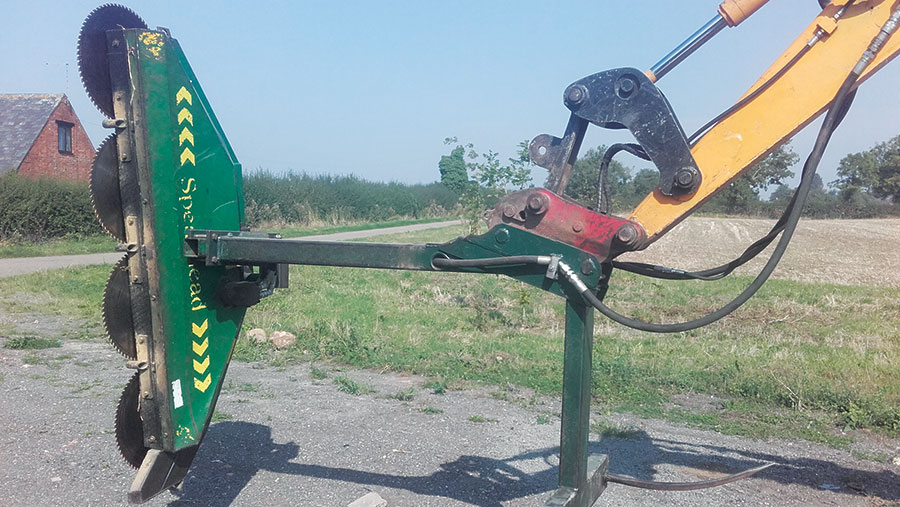 East Lothian farmer Douglas Dale built a branch-lopping tool for his Volvo loading shovel that means he can trim wayward bows with ease.

To get enough height, the tool has its own box-section extension bracket with a pair of heavy-duty bale spikes to catch the trimmed branches.

The chopping section consists of a tough bucket blade that closes like a jaw against a piece of heavy box section.

Plenty of power from the shovel’s third service means it can slice through timber up to 150mm in diameter, and because it is mounted on a pivot-steer, the chop length can be adjusted simply by turning the steering wheel.

It can reach to cut limbs up to 5.5m high and, as the timber is chopped, it falls on to the tines ready to be carried out of the way.