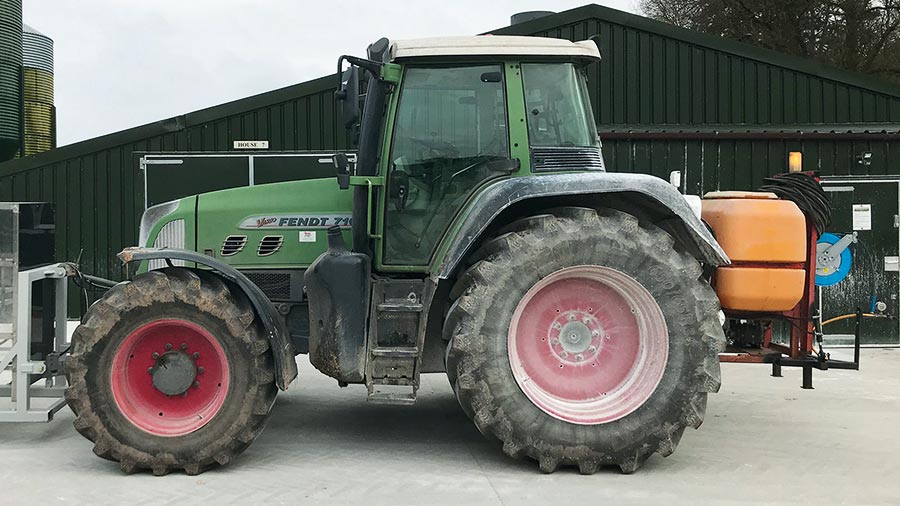 Poultry farmer Simon Eckley from Herefordshire designed and built a chick tray wash and disinfector to comply with tighter rules as a result of an avian influenza outbreak.

Having found the farm in a 10km restriction zone, he was told he would have to clean and disinfect every crate used to deliver his birds.

That raised the prospect of washing 3,200 of them by hand, so he hurriedly sought a solution that would minimise manual effort and avoid the team getting drenched in disinfectant.

He chose to manufacture the frame out of stainless steel that would stand up to the corrosive nature of the hospital-spec, biodegradable disinfectant.

To this, he grafted a three-point linkage that allows it to be mounted to the front linkage of a tractor and pallet sleeves to the base so that he can shift it into storage using the telehandler.

Inside the clear PVC-clad frame is a 1in chain carrying box-section lugs, which grab the crates from the loading port and pull them through the washing box.

They are sandwiched by rails and guide bars that can be moved to suit the various crate sizes used by different hatcheries.

The cleaning process takes no more than a couple of seconds – or as quickly as the operators can stuff them in at one side and stack them up at the other. 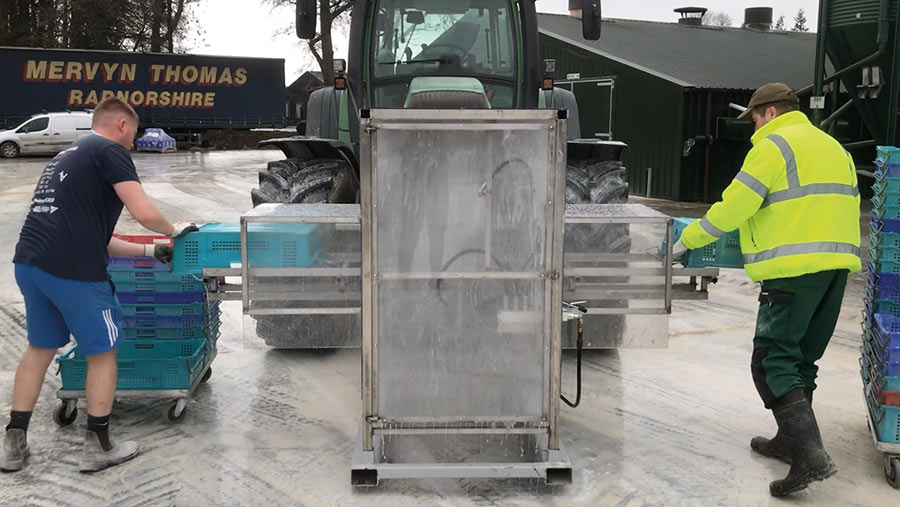 Drive comes from the tractor’s oil supply via a mini hydraulic motor, giving the operator full control of the chain speed and therefore how quickly the crates are dragged through the system.

He avoided using any electrical components, given the risks involved in dealing with high-pressure water.

He also fitted a hydraulic on/off valve that allows the operator to put the machine into forward/reverse in case of a blockage and, for safety reasons, a pressure-relief valve.

The washing element is based on a pto-powered pressure washer mounted on the tractor’s rear linkage. Mr Eckley fashioned this from an old 500-litre Allman sprayer several years ago, hacking off the booms and running a pipe to the cleaning system.

Here, it feeds a series of ferocious 40deg fan nozzles mounted top and bottom that provide full coverage to wash and disinfect every corner of the crates.

Before fitting them, he attached one of the nozzles to a handheld lance to work out how far the jets needed to be from the crates for maximum coverage. This turned out to be 18in, which determined exactly how big the frame needed to be.

Once applied, the liquid drains on to the concrete yard and into storage tanks.

His project took three days and, he says, offered a good distraction from the double lockdown of Covid-19 and avian influenza.