Plenty of growers have decided to spend time building their own cultivators and drills to suit their particular soil types and sowing regimes.

See below for the best of the entries into this year’s Farm Inventions Competition.

Keen to get some late nitrogen onto his maize crops to boost cob growth, Shropshire grower James Davies built a custom applicator to place nutrients at the base of the plant.

A conventional spreader would likely cause serious scorching to the plants, so he came up with a system to gently place fertiliser near the roots.

The starting point was an old Stanhay beet drill, which was stripped down, leaving just the hydraulic folding frame, wheels for depth control and the bout markers.

These were modified to form the outer wings of his applicator, which sits at 12m wide and covers 16 rows. 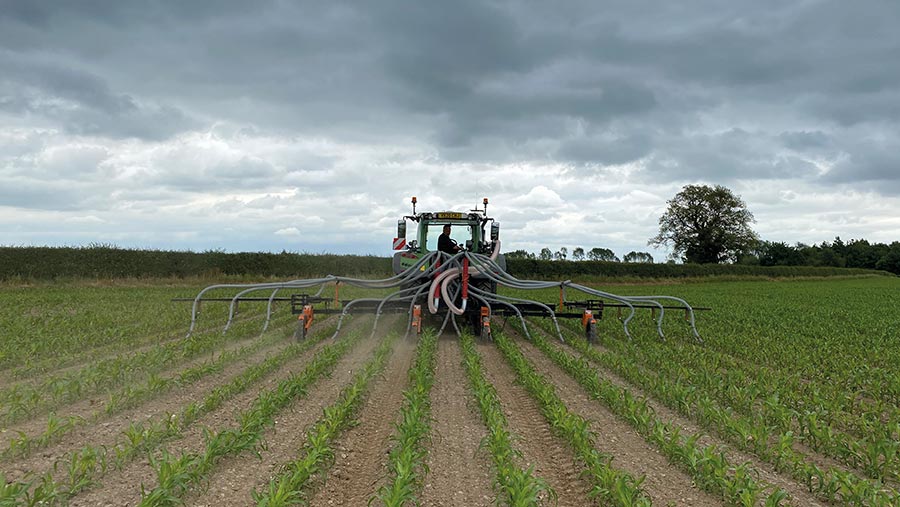 A pair of maize distribution heads were then fitted to the frame, with a network of flexible tubing spaced to sit between the crop rows.

These tubes are attached to the old beet drill frame and lengths of 50mm slurry pipe bridge the gap between the frame and soil. The slurry pipe sections are reinforced with old combi drill following harrow tines.

Fertiliser is carried in a Kverneland DF2 front drill hopper with twin metering systems that blow the product to the applicator bar at the rear.

Mr Davies applies the nitrogen as late as he can, without running the risk of the tractor snapping the stalks. This is usually when the crop is 60-90cm tall.

To help reduce the amount of tedious implement switching, Ryan Coates and his father bought a second-hand Bateman 2001 Hilo and converted it into a self-propelled Avadex applicator.

The Bateman was chosen for its powerful hydraulic supply which, unlike some other old self-propelled machines, was capable of running the hydraulic fan on their Techneat applicator.

The only significant modification was to extend the pipework to the rear of the chassis. 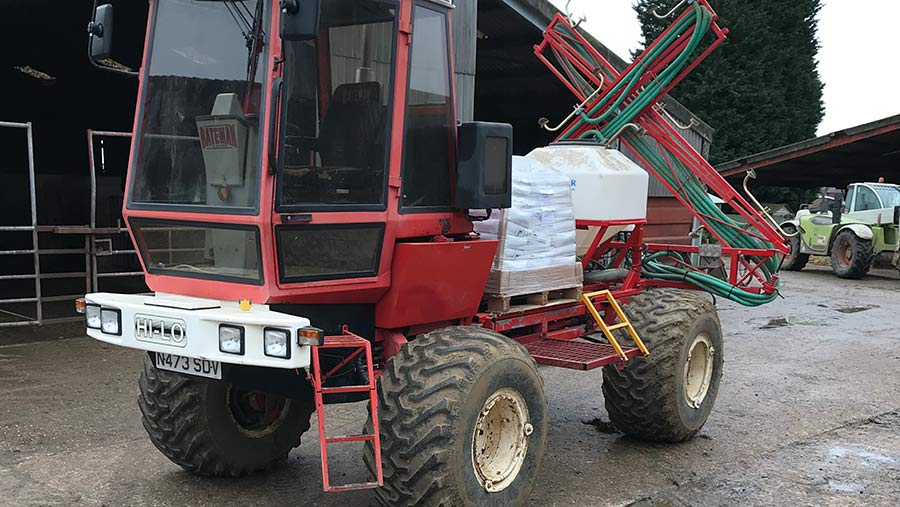 Originally, this spreader was tractor-mounted, so getting it to fit on the Bateman involved cutting off the linkage attachments and building a frame for it to rest on.

This attaches to the existing sprayer mounting points, so there was no need to make any modifications to the chassis.

The applicator sits at the rear of the machine and there is enough space between it and the engine bay to accommodate a pallet of Avadex granules.

To make additional use of the machine during harvest, they have also fabricated a frame to hold a 2,000-litre fuel bower. This can be lifted on and off with pallet tines and also secures to the original sprayer mounting points.

To save balancing his fertiliser spreader precariously on a stack of old pallets, Rob Gash knocked together a proper trolley.

It’s made from steel offcuts from another job and means he can lift the whole lot up with the telehandler or push it into the shed corner on its castor wheels.

Neatly, the spreader locates on vertical pins at the front of the trolley and is latched in place by linchpins.

Hooks at the back are engaged with a long handle, meaning there is no chance of the spreader and trolley separating accidentally.

When Richard Curnock and his brother, Rob, changed tractors last year, their new model came with the bonus of a front linkage.

However, with no implements to make the most of their new-found carrying capacity, they decided to build something that would benefit the plough, power-harrow, drill establishment system on their 100ha of arable ground. 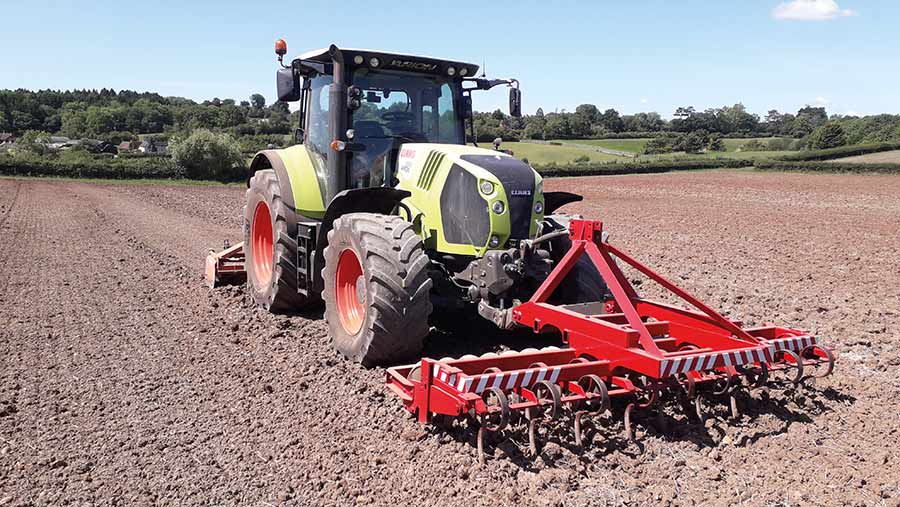 The answer came in the form of a tine and press combination languishing deep in the long grass.

Considering it ripe for renovation, the brothers cut off one of the two sets of front tines and press (to be stored as spares for the remaining set), then removed and reattached the headstock at the back of the implement.

It was put to good use in the autumn, crossing the ploughed ground at a slight angle to knock over the furrows, reducing the strain on the power-harrow and saving an extra field pass.

Costs extended to paint, welding rods and cutting discs, plus, says Richard, a meal for his brother at the local pub.

Hayling Island farmer Simon Walter has spent the past few years fine-tuning his drilling system, which is now based on a combination of heavy-duty legs paired with a Lemken Solitair.

The brick earth he farms means neither shallow cultivating nor ploughing are conducive to forming a decent seed-bed.

Similarly, a one-pass system is imperative to save getting caught out by wet autumn weather that can turn cultivated ground into a quagmire.

His latest iteration, of which he has built two, is based on a 3m, seven-leg cultivator that, he says, strikes the right balance between moving enough ground and avoiding blockages. 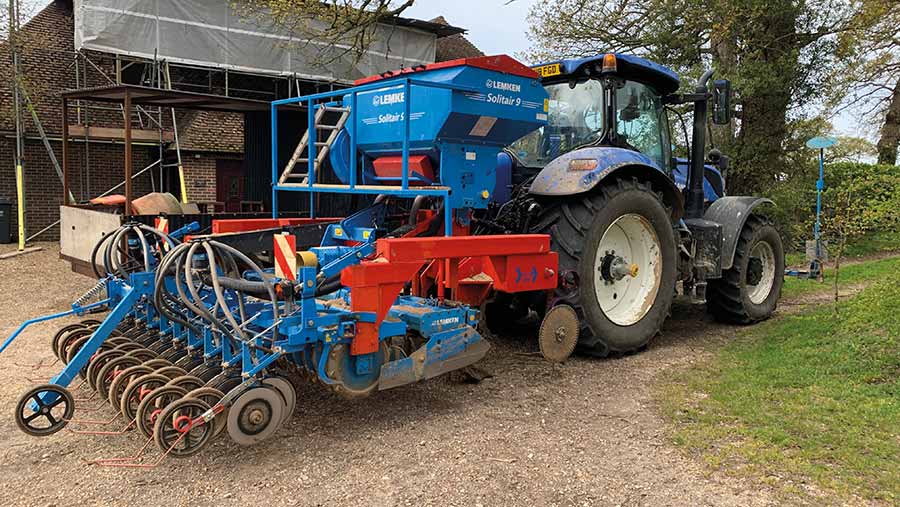 Five Lemken Karat legs carry winged points and are set to work at roughly 125mm deep. The other two are Ransome-type subsoiler legs positioned to run in line with the tractor wheels to loosen down to 350mm.

These are followed by a power-harrow, which can be moved up and down independently of the main frame.

Working depth of the legs can be adjusted by the position of the crumbler roller at the back, and straight discs on either side limit soil throw and ridging between bouts.

For the drilling components, he sourced a pair of second-hand Lemken Solitairs to fit on top of the cultivator units and mounted the markers to the front of his New Holland T7.245 to help balance the weight.

Next, he plans to fit seed tube monitors to spot blockages early and avoid bar-coding the field with missed rows.

Inventions Competition regular Paul Lowrie has returned with Jade – his take on a static dryer engine.

The Durham-based farmer used an old Perkins engine from a Claas combine as the base, with the drive transferred via a swinging beam arrangement. 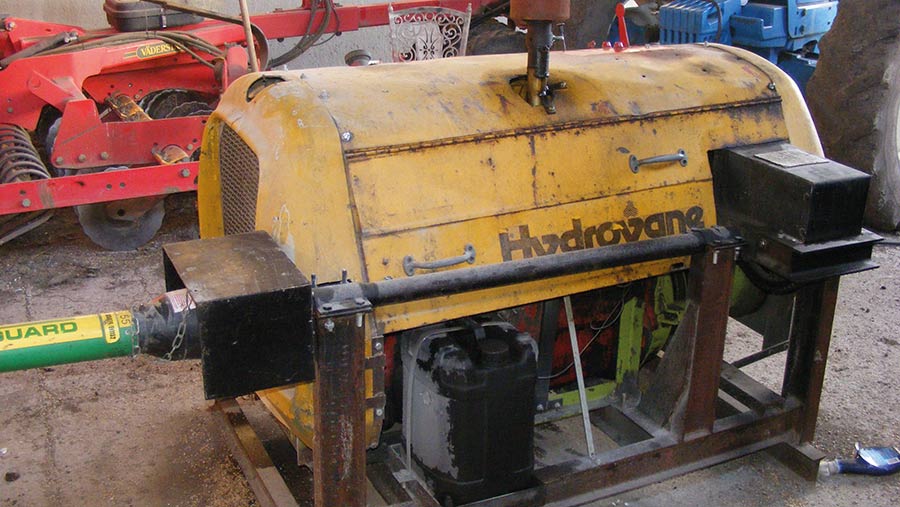 A slack clutch is employed with a lever to engage the belts to run his 9t Master dryer. The advantage of this arrangement is that it can gradually engage when the dryer is full, putting less strain on the gearing.

The basic controls feature a keyed ignition and pull-stop, throttle lever and an oil pressure and charge light. He used an old compressor cover to protect it from the elements.

He plans to recondition the radiator and paint the shell, as well as upgrade the diesel tank from the hastily added 20-litre affair he runs at the moment.

The whole setup, including the engine bought from the local scrap man, cost about £400.

To get a representative sample, this job requires the collection of 50 cores of soil/ha, which is incredibly time-consuming if done by hand – particularly when a typical job can be more than 100ha. 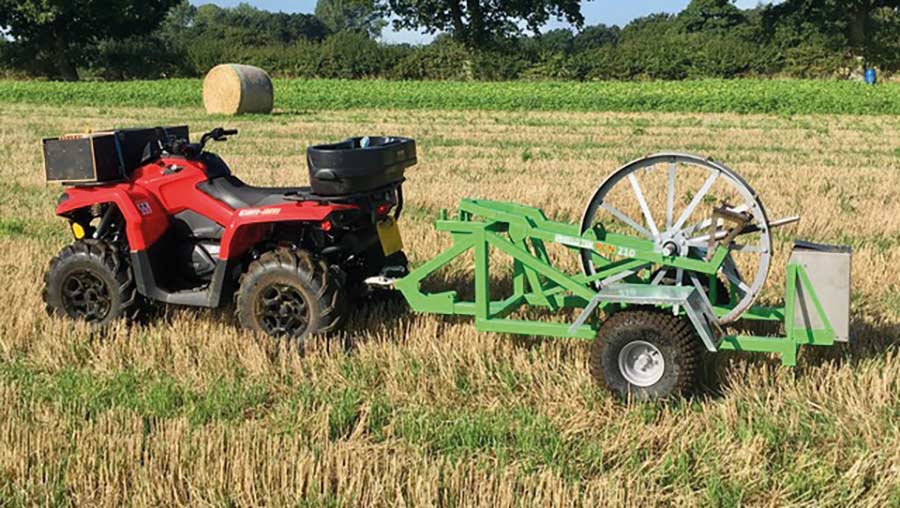 To streamline the process, director Andrew Mount and his team designed an automatic core-collecting machine that can be towed behind an ATV at speeds of up to 11kph.

This has a sampling wheel that guarantees a core is collected every 3m, which adds up to a total of 200/ha.

As the wheel spins around it has an automatic ejection system that jettisons the core into a collecting hopper at the rear, before returning to take another.

As well as speeding up the sampling process, Mr Mount says it gives a far more representative sample.

Living on the remote South Atlantic outpost of St Helena has its challenges, and for island agronomist Ted Whitton, that includes getting a decent crop of potatoes.

Limited to pretty rudimentary equipment because of prohibitively high shipping costs to the British overseas territory, much of the planting is done by hand, save for a few tractors, ploughs and rotavators. 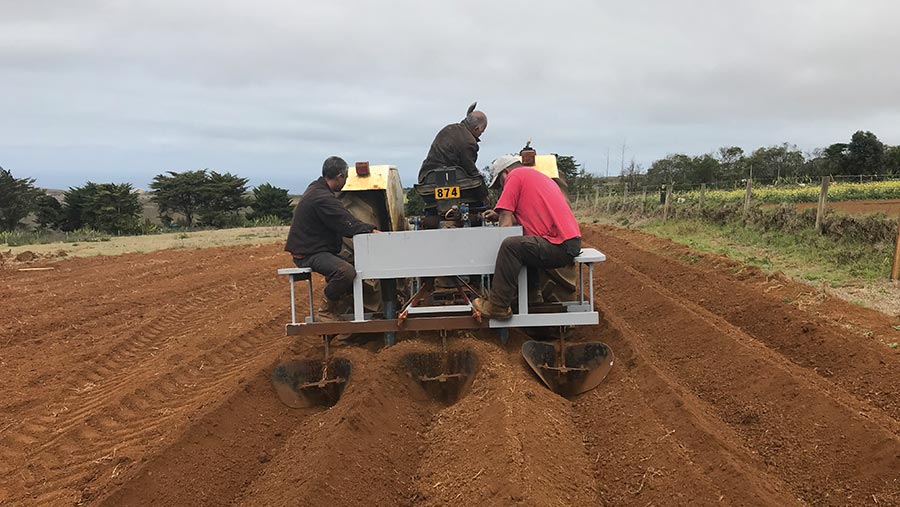 As well as being slow and laborious, this system leaves the plants vulnerable to potato tuber moth, which, says Mr Whitton, has been known to wipe out an entire crop before it has appeared.

His answer was to work with farmers and fabricators Billy and Jeremy Clingham to convert a ridging machine to a very simple planter.

Seed is dropped down heavy steel tubes with cultivator points at their base. Rate control simply involves the people charged with dropping the seed down the chute to match the passing of pre-determined tractor tyre lugs.

The first trials yielded the equivalent of 55t/ha compared with an island average of 13t/ha, and a job that once took three people an entire day now just takes an hour.

Fed up with paying a local contractor £40 a time to transport his digger a mile down the road, Devon farmer Stuart Cole stripped down an old 5t Weeks tipping trailer and converted it into a flatbed unit capable of carrying the excavator.

He removed the sides and, after shelling out £260 on steel and a tin of red oxide paint, set about adding strength to the existing bed with horizontal 25mm angled steel bracing.

The ramps and extended section at the rear were made from 50x25mm channel and he also built a new headboard from some 50mm box section. 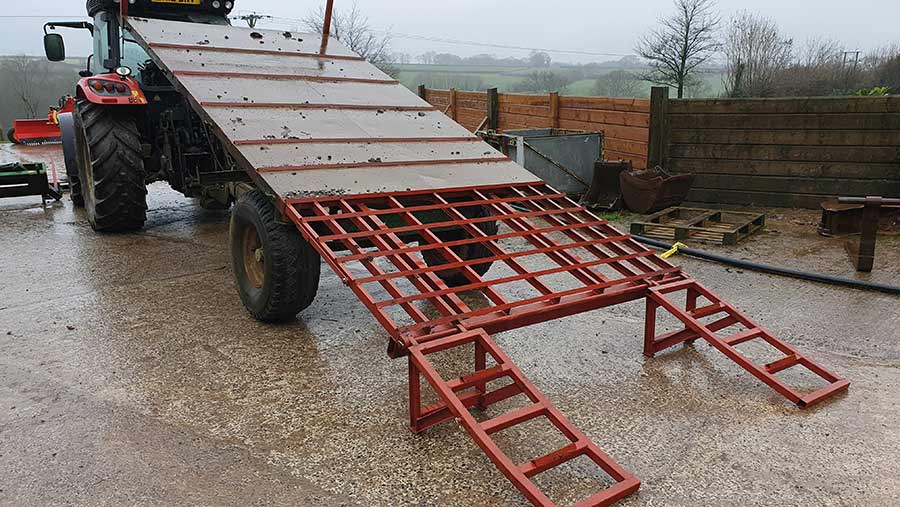 The original tipping ram allows the digger to be driven onto the trailer with the tracks in full contact with the deck. Mr Cole admits that it probably isn’t geared up for everyday use, but is perfect for the short journey he uses it for.

It also saves the family farm more than £1,000/year in haulage costs as it is moved every couple of weeks between the units. The build took Mr Cole about 30 hours over a weekend and a few evenings.

After purchasing a 3.6m Blench pigtail cultivator from a local farm sale, Cambridgeshire farmer Paul Beeton stripped it back and set about beefing it up for use on his tenanted land.

He hacked the working width down to nearer 3m, added supports to the headstock and welded an extra bar along the back to accommodate an additional row of pigtails.

These were set tat 60cm intervals to allow trash and straw to flow through at about 11kph and usually run relatively shallow to encourage weed flushes after harvest without disturbing too much soil.

A couple of steel plates were added to the rear to hold a custom-made depth roller he built in 2017.