After an attempt to lower his wind turbine to the ground resulted in his 15t excavator being dragged down the field “like a ski”, Mr Burt set about finding a safer technique.

He considered bringing in an external contractor, but found few had heavy-enough equipment capable of travelling on wet ground.

He therefore set about building his own land-anchor winch, which could be fitted on a front loader, telehandler or a three-point linkage.

Unlike blade-type winches that can act like a bulldozer and peel of turf when heavy weights are pulled, the geometry of Mr Burt’s creation means the force is pushed deep into the ground, so it can’t slip. 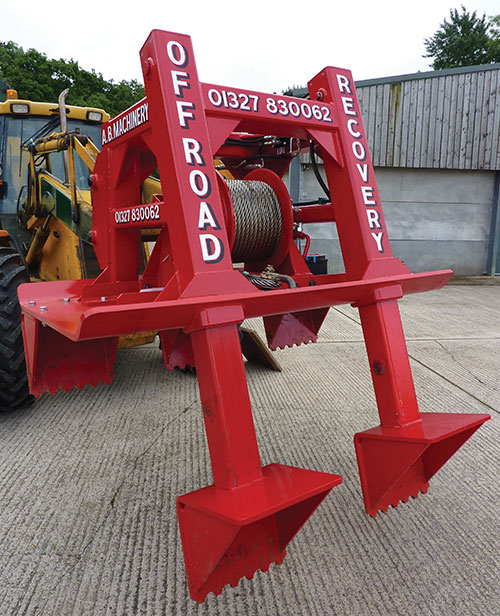 At the front, there is a pair of hydraulic legs that push into the ground and transfer force to a set of toothed feet at the rear.

Together, these anchor the winch and allow heavy weights to be pulled without transferring the load to the carrying vehicle.

The winch and legs are powered by a hydraulic supply from the carrying vehicle and he has fitted a solenoid valve and remote control unit that allow it to be operated from up to 300m away. This both improves safety and gives a better view of the job in hand.

Mr Burt’s wind turbine has a 1t head mounted on a 20m pole, and it features a hinged base plate that allows it to be lowered to the ground for maintenance.

When it’s being lowered or raised, there is a huge pulling force exerted on the winch. But apparently, it stays firmly planted.

The winch was built in his farm workshop near Towcester, Northants, and was put together over a six-month period. The only work he outsourced was getting the edges of the 2.5cm base plate bent by a specialist engineering firm.

Since competing the build, the winch has also been used for multiple vehicle recovery jobs – such as extracting bogged-down tractors and excavators. A number of people have also approached him to build one for them.

This design and those of his other inventions entered into this competition are protected by UK design right.