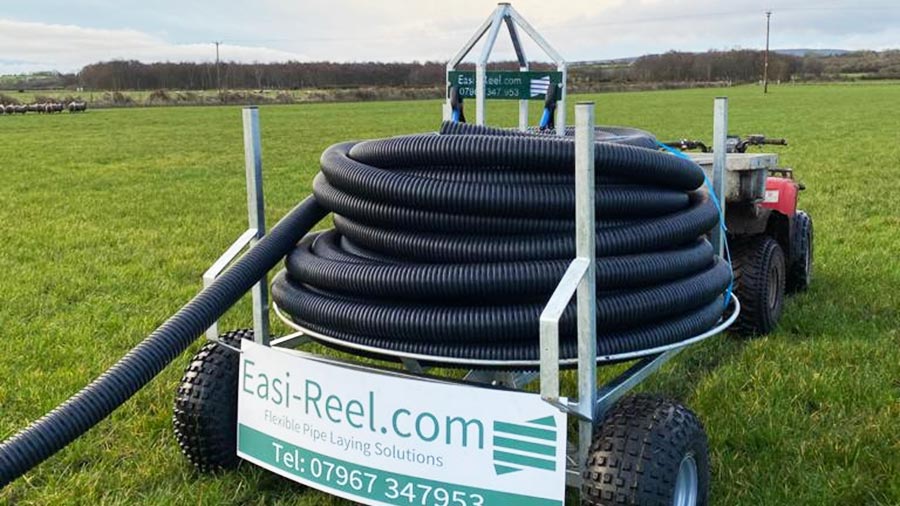 A Northern Irish farmer has come up with an ingenious way of avoiding the stress of dealing with awkward rolls of water or drainage pipe.

Donal O’Donovan had been looking for a tool to help him unfurl loops of pipe on his farm in Coleraine, County Londonderry, but found nothing on the market that suited his needs.

Along with a friend, he came up with a design that allows the reels to be loaded in an upright position and then rotated through 90deg to sit horizontally on the central turntable. The towing vehicle then drives forward at a steady pace, causing the reel to spin and the pipe to uncoil at the rear.

It can be used to lay all types and sizes of water and drainage pipe, although bigger 63mm water pipe requires a larger central hub to be fitted. The implement can also be used to unravel high-tensile wire.

With Mr O’Donovan’s original put to work on the farm, word got around and he has produced almost 30 in the past six months. Assembly takes roughly a day and the welded frame is sent away for galvanising before the hubs and wheels are fitted.

The standard model costs £995 excluding delivery, while the version suitable for bigger-bore water pipe is £1,175.