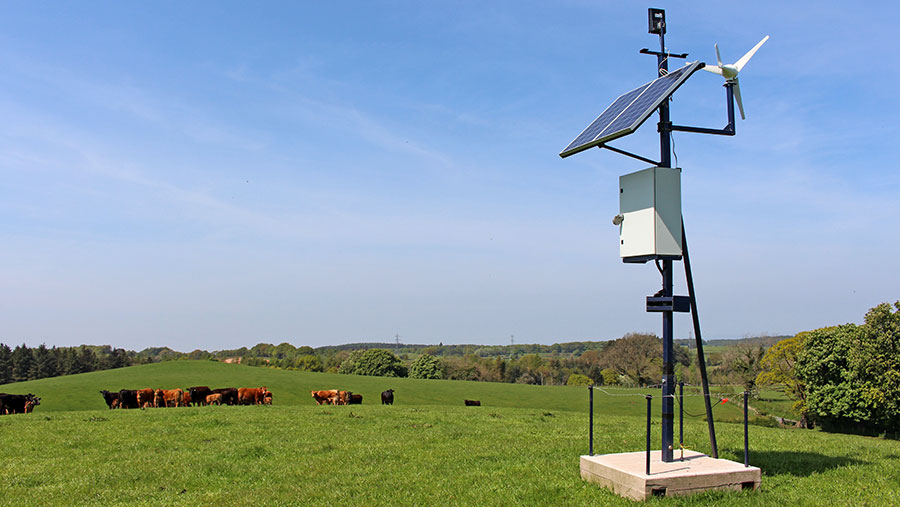 Cumbrian farmer Edward Dean has built a portable mast to help transfer valuable performance-monitoring data from his Limousin herd in the field back to the farm’s computer.

The rolling hills around Kirkhouse Farm in Brampton, Cumbria, have played havoc with any kind of data capture in the past when a clean line of sight was essential, but the new portable set-up sends information from any part of the farm to a cloud storage facility to avoid interruptions.

As an AHDB strategic farm, Mr Dean has trialled the monitoring system and hopes to use it to artificially inseminate his disease-free herd at the earliest sign of heat using high genetic merit semen to maintain strong maternal traits.

However, for this technology to work, the data needs to be downloaded regularly from the collars on the cows to the database.

That’s fairly easy for those running dairy herds that return to the farm twice a day for milking.

But for Mr Dean’s outdoor beef herd, capturing and accessing the information on a regular basis has forced him to develop a mast that keeps the technology dry and safe in the field and consistently fires data back to the yard.

Allflex’s cow monitoring systems work by keeping tabs on rumination from collars around the cows’ necks.

The collars measure muscle movements to indicate activity, which can help detect changes that may relate to the health and well-being of individual animals. A weight on the bottom keeps the collar centred. 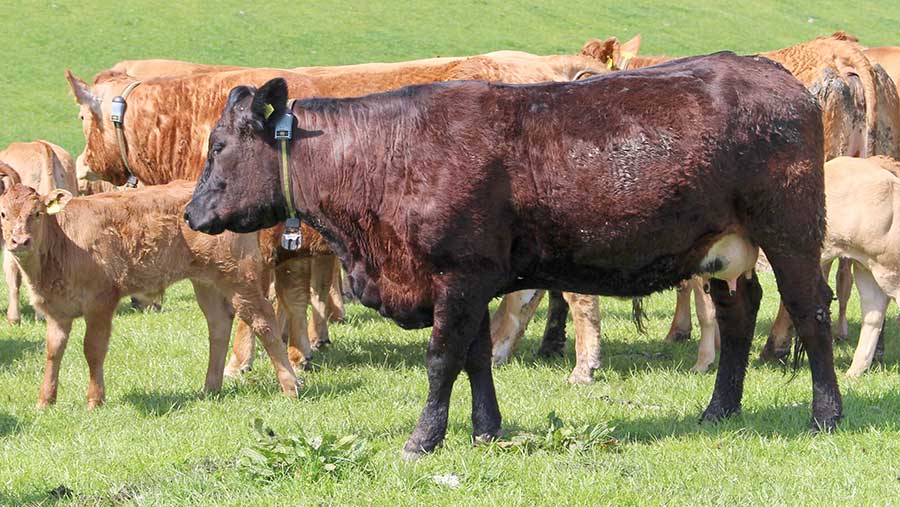 Any change in activity could also indicate a cow showing the first signs of heat, which is commonly missed.

The Heatime system was the first Allflex unit tried by Mr Dean, but the catch was that  it needed a clear sight line to transfer the data.

It was hardwired into the house’s electrics and mounted on the gable end, so when the cows were grazing in field dips or behind trees, the information didn’t filter home.

This limited the number of fields that it could be used in. Due to this, the data was too unreliable to make properly informed decisions – it could be as little as one reading every four days.

So when Allflex’s more sophisticated 4G-based SenseHub kit became available, Mr Dean took delivery of 40 cow collars, SenseTime transmitters and the use of the app and computer package.

Unlike the old hardwired unit, the new system works from a 4G router and uploads all data to the cloud, where it can then be downloaded to the farm’s computer. 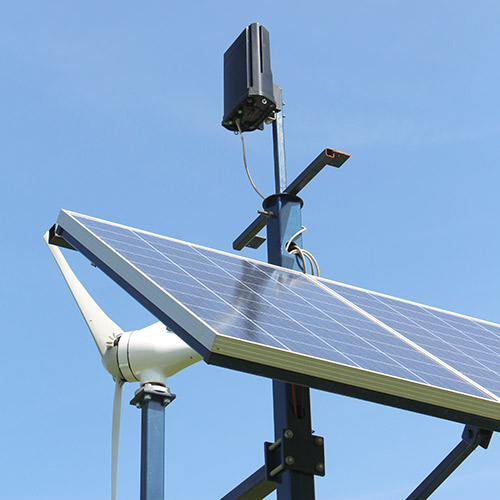 Sensetime transmitter on top of the mast © Edd Mowbray

Changes in activity now alert Mr Dean by text, giving him long enough to get the cows in ready to hit the optimal artificial insemination window.

Being cloud-based meant that if Mr Dean could power the transmitter and router from anywhere on the farm then he could move them to sit in the fields with the cows and collect all the data in a timely fashion.

After a few days of head scratching he set to work on building a portable base station. 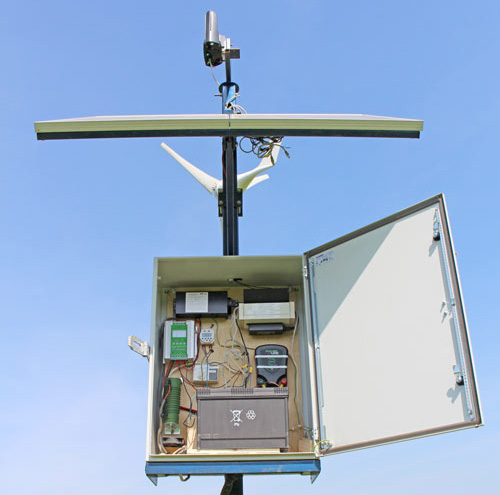 Inside the weatherproof box © Edd Mowbray

The bottom of the mast was formed from a large concrete block, with pallet fork holes to move it around. A 14ft pole to carry all the kit was added to the centre of the block, with a stay to support it.

All the electronics are housed in a weatherproof box and wires run inside the steel mast to stop the cows rubbing against it.

There is also a single-strand electric wire around the base, which helps to further deter any overly inquisitive animals.

A brace of Eco-Worthy solar panels were deemed powerful enough to run the 4G router and SenseHub transmitter, although Mr Dean found that on cloudy days the box ran out of puff by early evening.

Initially, the IP digital video cameras, which run LED night lights, were thought to be sapping the power.

However, the real culprit was the 700W inverter that needed a fully charged 12V leisure battery to be effective.

With more power required to keep the data flowing, a small wind turbine was added alongside the panels to boost the charge when daylight hours are low.

This has a built-in brake that stops it spinning on windy days to avoid overloading the system.

A solid-state power converter was employed to bypass the inverter and control the two power sources.

This has become a vital cog in the mast’s smooth running and now the deep-cycle battery rarely drops below 70% charge and keeps the panels and turbine in perfect harmony.

Solar is still the primary power source and the panels can be tilted depending on the time of year to catch maximum rays.

Once the battery hits 12.1V, the power controller engages to stop charging until the voltage falls to 10.8V, at which point it drops out for charging to kick back in.

The dual power controller also uses the wind turbine to boost any shortfall from the panels.

Another battery-saving addition was a timer that turns the unit off between 11pm and 4am and limits the amount of data sent by the EE 4G SIM, which has a 2GB monthly limit.

Mr Dean put the mast together with his son Oliver and the help of local IT engineer Nigel Gammage, without whom Mr Dean says getting the internal workings of the mast running sweetly would not have been possible.

The mast had a couple of cameras installed to keep thieves at bay but also to spy on the cows’ movements around the mast.

However, in the early stages, the regular power outages reset the cameras’ passwords back to factory settings and cyber hackers managed to gain access.

The cameras became infected with the Mirai virus and were rendered useless.

Mr Dean chuckles at how disappointed the hackers must have been after breaking in to find footage of cows in a field rather than something a little juicier. 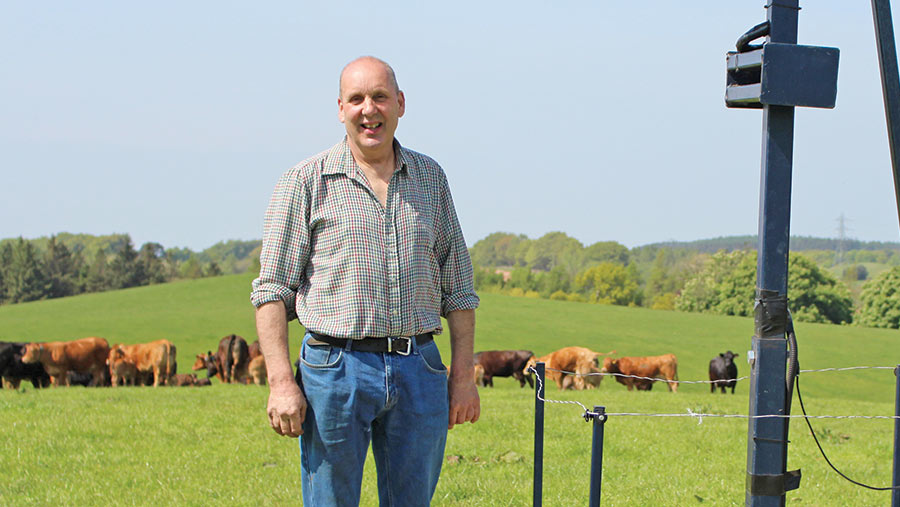 Now that the power supply has been sorted, two new cameras are due to be installed. There’s also a thermostat inside the box that activates a fan to cool the internal parts down on hot days.

Updates for the cow collars are completed remotely and all information can either be viewed on the computer in the farmhouse, where detailed graphs and timings can be seen, or on Mr Dean’s phone.

The mast is positioned high up on a hill, so even if the cows graze low-lying pasture, it will still be in reach.

Mr Dean reckons it would take him a day to knock up another one, albeit with a few modifications, and he’ll find out at calving time whether the SenseHub and mast combination have been effective.

If you’ve been inspired by Edward Dean’s smart cow mast, or you’re already using a homemade bit of kit that has saved you money or made your life easier, we’d love to hear from you; and you could be in with a chance of winning some cash.

Our annual Farm Inventions Competition is now open for entries, with a total prize fund over the three categories – simple, intermediate and complex – of £2,550.

Deadline for entries is 31 January 2020, so if you have always had a niggling design that needs to be bought to life, then now is the time.

Send a few words about the design and how you built it, along with a few pictures and some contact details, to oliver.mark@proagrica.com or get in touch with us via Farmers Weekly on Facebook or @fwmachinery on Twitter.