See also: Workshop tips: What you need to know to use grinders safely

The telehandler attachment was constructed from universal beam, a hydraulic ram and Manitou headstock, and has a second hook halfway along its length for lifting heavy items. 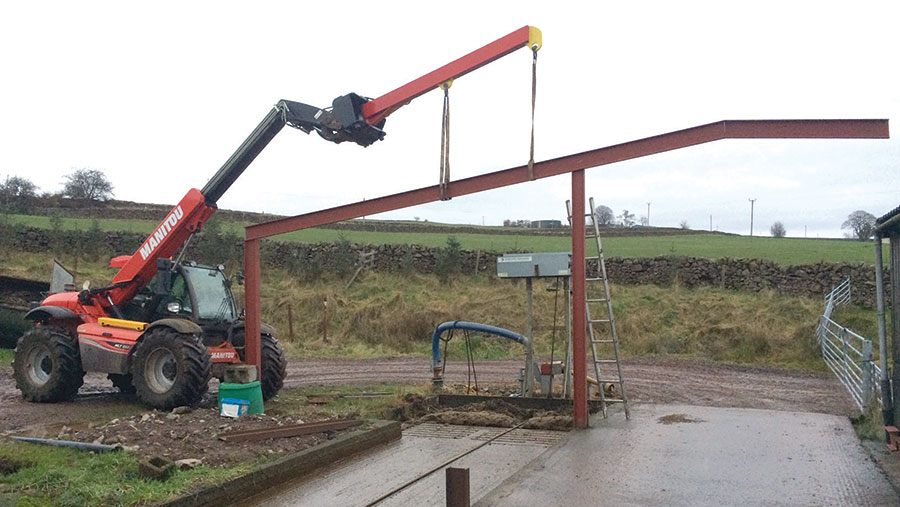 Hydraulic side shift is by way of a ram plumbed into the loader’s third service, and it offers a total articulation of 150deg. Combined with the headstock tilt/crowd and boom in/out functions, it offers movement along three axes.

This means there is no need to move the whole telehandler to make slight adjustments, which has improved safety and accuracy, says Mr Maxwell.

It took a week to construct and, so far, has been employed on six shed building projects.

A neat attachment adaptor plate has allowed Kelso-based Kevin Trotter to get more use out of his 360 digger.

The steel assembly allows attachments designed for a JCB Q-Fit carriage to be hooked to the farm’s recently purchased JS130 excavator. 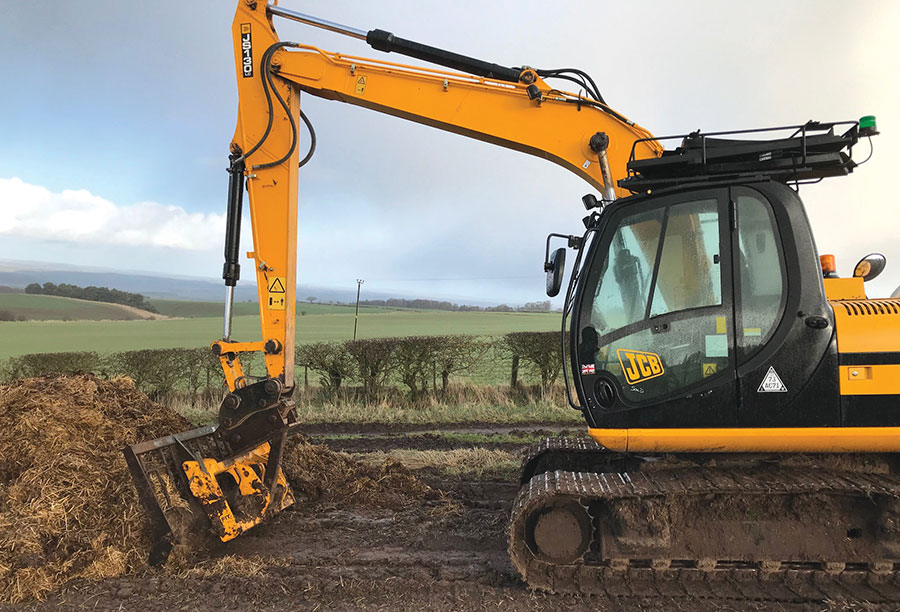 Expenses were modest, as Mr Trotter already had all the essential components – spare Q-Fit carriage, 2.5cm-thick steel plate and pins – tucked away in the workshop. Manufacturing took just an evening, though it involved a fair bit of planning, he says.

It’s meant that in wet years – last autumn being a prime example – he can load muckspreaders with the tracked machine, significantly reducing ground compaction compared with a telehandler.

Wrestling with wheel weights carried on pallets often takes two men, lots of time and, probably, the odd health and safety breach, but not so with Derek Howard’s loader attachment.

His smartly finished tool was built from an old cultivator stub axle bolted to a steel frame that forms the telehandler attachment. To the turning axle he fitted six nylon-lined carrier brackets and three locking arms. 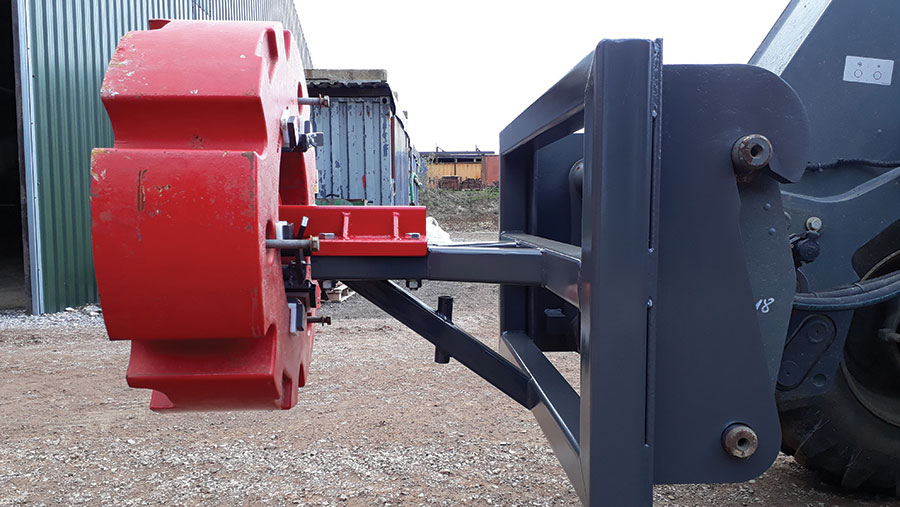 In use, the operator slides the hub through the centre of the weight. Once in position, the locking arms are turned through 90deg to hold it in place.

The weight can then be offered up to the tractor wheel and the beauty of mounting it on a free-turning axle is that it can easily be lined up with the bolt holes.

Mr Howard says it has proved particularly useful on his Fendt 828 with Variogrip tyre inflation system, as the weights include a recess that must be carefully positioned over the check valve.

The build cost totalled just £150, as most of the components were already in stock.

Stock farmer John Adams from Ringwood, Hampshire, knocked together a gloriously simple hook for shifting ring feeders while still having a bale of silage on the loader tractor.

It’s notoriously difficult to repair and reseed the ground around permanently positioned ring feeders in the spring due to poaching, a build-up of uneaten silage and a trench of slurry. Therefore, he chooses to move the feeders at every refill. 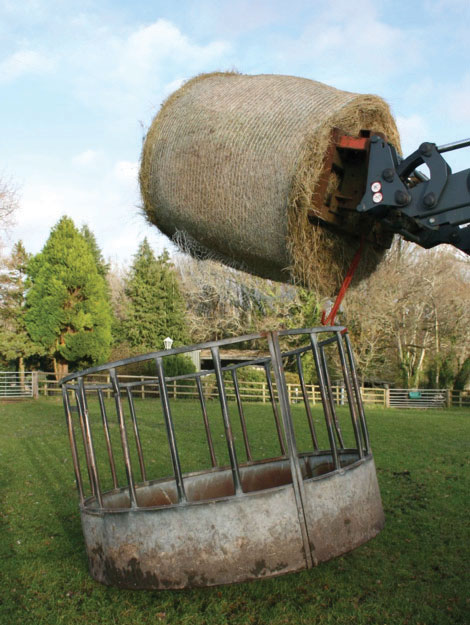 To do this, he made a hook from 20mm bar roughly 75cm long. The top part of the hook hangs on the front loader or bale spike, allowing the feeder to be lifted at the front and dragged backwards to fresh ground.

The two bottom hooks are welded at right angles to each other so at least one of them will catch on the top ring of the feeder. The hook also works well on tombstone feeders, he says.

Narrow feeding passages are pretty common on livestock units and getting grub into the right places with modern kit can be a bit of a challenge.

Northern Irish engineer Robert Wright was tasked by one of his dairy farming neighbours to build a swivelling bucket for the front of his loader. The clever design means the bucket can be used in a normal fashion or be spun 90deg to deposit material at the side of the handler. 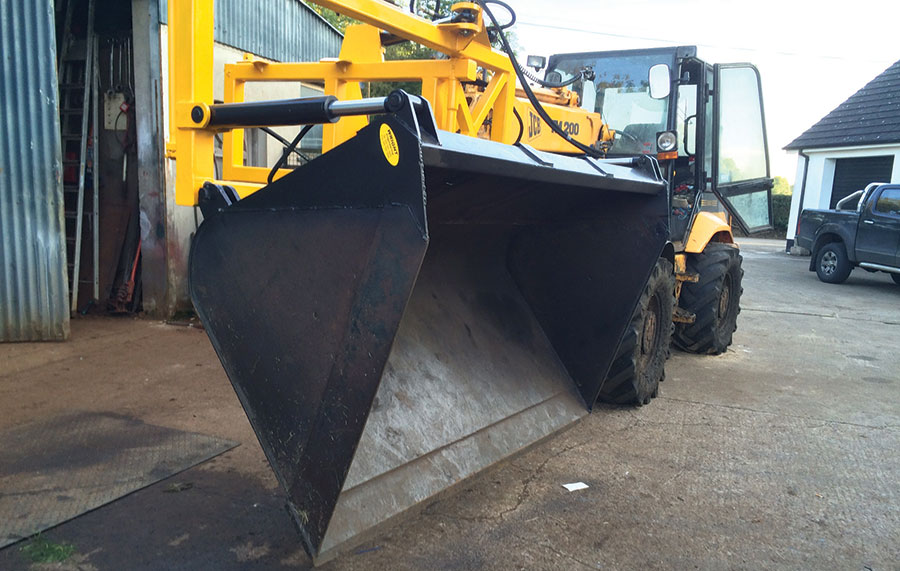 For this, Mr Wright attached the bucket supplied by the farmer to a box section frame with a pivot point located vertically for the bucket to swing from. This was approximately one-third in from the right-hand edge and it took a fair few attempts to get the weight distribution correct.

This means when the bucket is turned 90deg, the weight distribution is 70% in front of the headstock and 30% coming back towards the machine.

A solenoid valve has ben piped to the third service, so the bucket and subframe can be swung out and still have tipping and crowding functions, thanks to two rams fitted between the subframe and the bucket.

A clever latch system was needed during normal work, as the bucket tended to creep away from the frame. It is based on a single-acting hydraulic ram and a spring mechanism working on the principle that oil takes the path of least resistance, so when the flow begins, it unlatches before the bucket is pushed out.

The spring-loaded part of the system will automatically lock the bucket when it returns to its original position to avoid any creeping.

The whole project took about a month to complete and cost in the region of £4,500. Mr Wright admits that if he were doing it again, the positioning of the rams to crowd the bucket would be altered.

In order to take full loads back to the yard, Kent farmer Simon Fredricks adapted his flat eight-bale sledge so it was leaving piles of 10 bales that would take up the full load-bed on his trailer.

The 10-bale affair turns the end two bales and according to Mr Fredricks, actually ties in better and makes the stack more stable during transport. 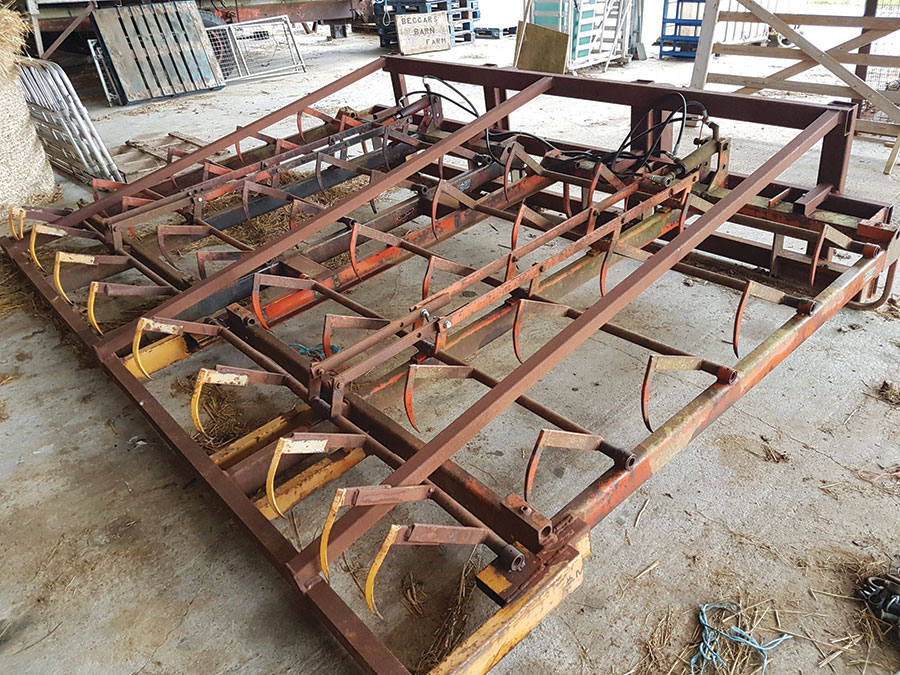 Local mechanic Joe Still helped to convert the sledge, which involved using some half shafts from a Land Rover as well as beefing up areas of the machine to get the bales flowing out correctly.

To unload the bulging trailer back at the yard, the pair converted a couple of Browns eight-bale grabs into a huge 20-bale lifter. The grabs cost the grand total of £95, with the most expensive parts being the new hydraulic pipes.

It took the best part of a week to make and fits the farm’s John Deere 3800 articulated loader. The grabs have been braced with some heavier-grade steel, as the original units needed some reinforcing.

He came up with the idea of building a bucket that could take 4.2t of fertiliser before being tipped into the spreaders. Made from 3mm sheet steel, the bucket has a set of forager wagon knives in the top to split bags as they are lowered in, so the operator doesn’t leave the seat and can unload six bags at once. 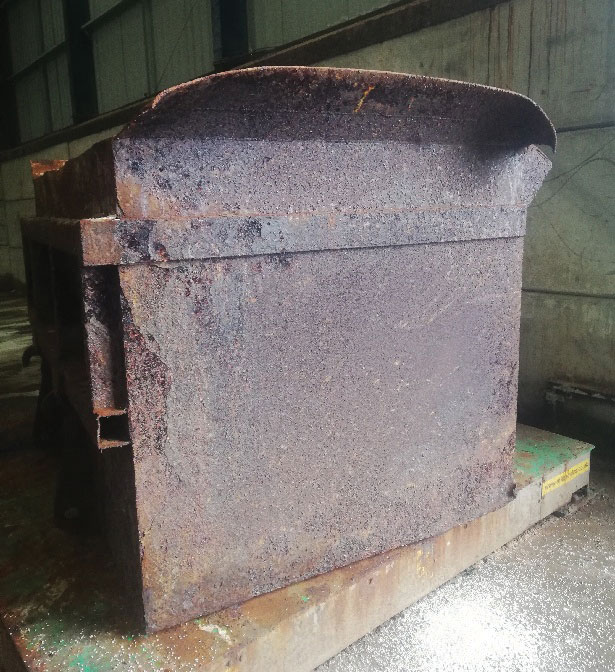 Once full, the Claas telehandler hooks on and tips into the hoppers. All the staff are now so set on the idea, that if the bucket has been moved, they’ll go and find it rather than loading the old way. So far, more than 6,200t have been loaded with the bucket, with no spillages.

It took two days to put together. The first day was spent assembling it, but when it was tested, there wasn’t enough angle to tip the fertiliser out. So, the second day was needed to tweak the design, although it never received a lick of paint.

Bawtry contractor Mark Wagstaff was looking for a squeeze grab that didn’t have the D-shaped paddles on, as he wanted to get tighter bale stacks to stop vermin and birds nesting in the holes.

Realising he couldn’t find anything, he set about designing and making his own. He used a couple of lengths of 100mm box section for the arms,  which are tapered at the end to slide in between bales. It is also possible to unstack without puncturing the wrap. 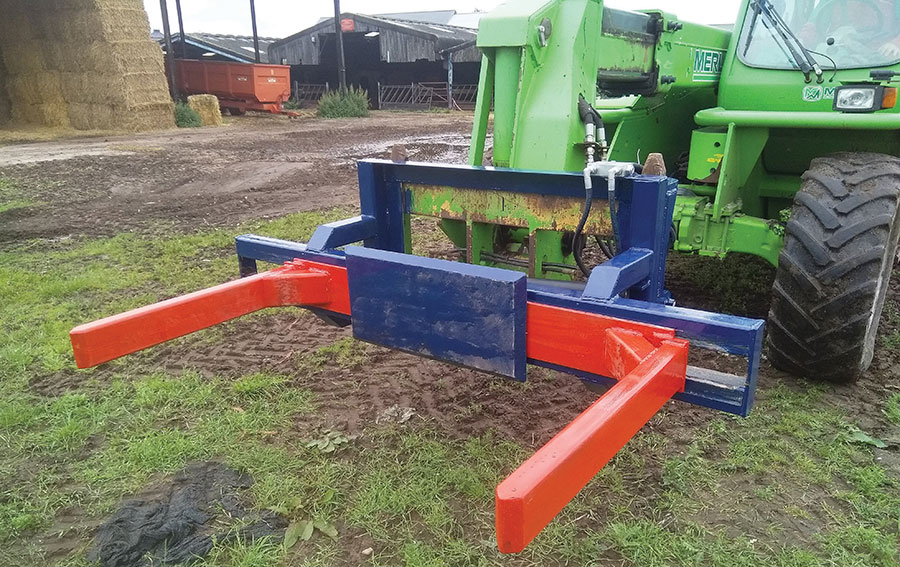 The build took about a week to complete in April 2019, once all the pipework and metal had been delivered. Mr Wagstaff shifts up to 7,000 bales a year and although he reckons the grab cost him similar to a new one, the end product is something that is fit for the job, and he no longer has to leave gaps in between bales.

Switching from chopped silage to round bales meant Gary Brandrick had to find an easier method for splitting up the bales to feed his 60-strong herd of dairy cows.

His feed shed consists of two long, narrow passages and, rather than spending money on a feeder wagon, he came up with the idea of mounting two shear grabs together in order to break round bales into manageable chunks. 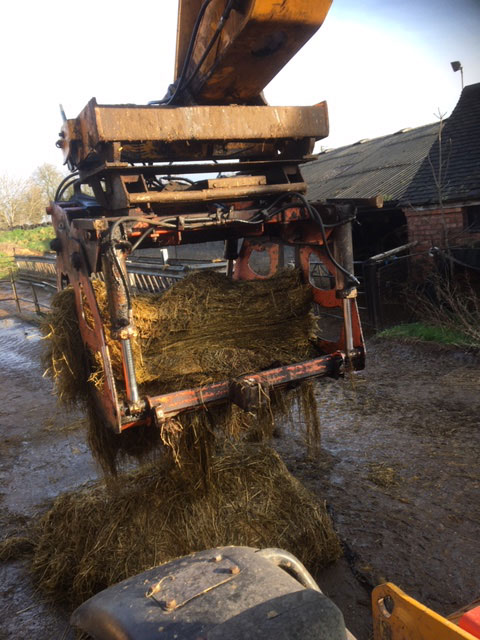 He already had a 20-year-old Parmiter grab and managed to source another identical one on eBay for just £65, conveniently located only 10 miles down the road. He took the forks off and mounted the grabs together, leaving a little gap between them to avoid any pressure issues when they close.

Luckily, his JCB 530-70 doesn’t show any slowdown in hydraulic flow while coping with two grabs, and they shut evenly every time. Mr Brandrick is able to cut bales up into little chunks and he is now a dab hand at removing the plastic as well.

The grab is now four years old and handles about 800 bales a year on the Derbyshire farm.