Farmers have found plenty of ways to save time and money by building their own tractor attachments and servicing tools, including jack supports, oil drain pans and various carrying crates for ATVs, fences and bale wrap.

Having spent years spannering on vehicles, Alistair Bray became frustrated that jacking points were often the best place to put an axle stand.

As there is usually little space to operate both safely, he decided to look for a combined jack and axle stand. After failing to find a commercially available product, he fabricated one himself. 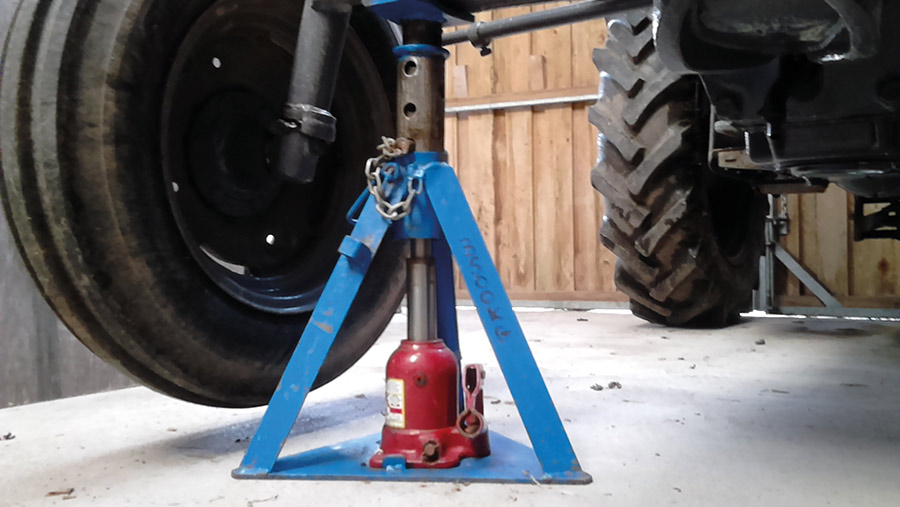 The pictured jack was built about 12 years ago using a low-profile 3.5t bottle jack that was salvaged from a commercial vehicle. Mr Bray says he spent a considerable amount of time calculating the correct amount of telescopic adjustment for the axle stand element.

During operation, the stand is placed under a lifting point, the jack ­is raised and the locking pin is inserted as it would be on a conventional axle stand. The jack is then lowered so the weight of the machinery is supported on the safety pin.

The jack is secured to the base of the stand and there are brackets for storing the locking pin and jack handle.

Rather than buying front-end ballast for his Fendt, Charlie Smith set about building his own smart weight box with plenty of space for stashing tools and spares.

The hefty unit is made from 12mm and 15mm steel plate and includes a centre compartment for housing additional loose weights, as well as storage cabinets on either side. 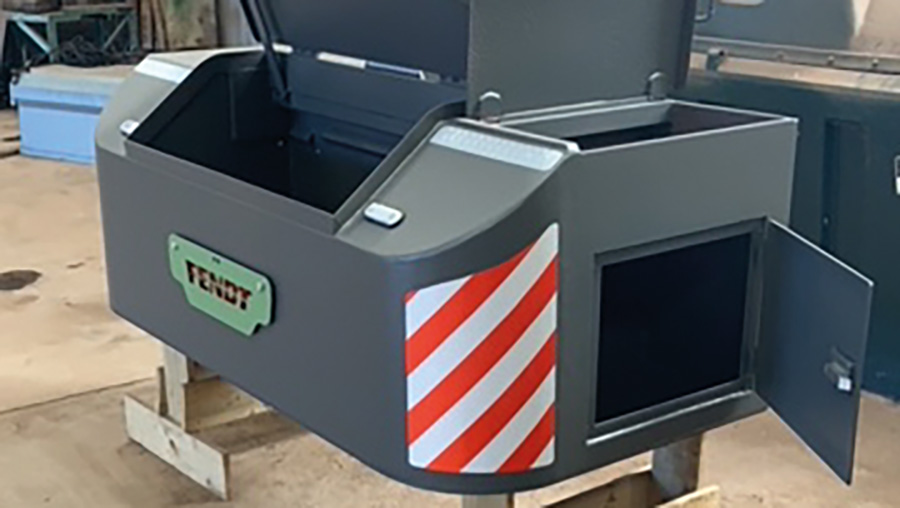 These have shelves to help keep the contents in order and Mr Smith has fitted lockable hinged doors that sit in a recess with chamfered edges to keep moisture out. There is also a small toolbox with flip-up lid situated near the linkage, as well as brackets for carrying a spade or fork.

Mr Smith designed the box to sit as close to the tractor as possible, and added some neat touches, such as a sloping front and professional-looking rolled corner sections. He finished it off with hard-wearing Raptor paint, added some LED marker lights and fitted a Fendt logo.

The box took eight days to build and it weighs 840kg before any additional weights or tools are added.

Rather than supporting his tractor on a wobbly selection of blocks when changing wheels, Stephen Stockdale came up with a safe jack that holds the tractor up should the lifting ram fail.

The jack is a fraction shorter than the tractor’s axle, so that it only has to lift 10-15cm before the wheel is clear of the ground. This means that if the jack fails, the tractor will only drop a short distance and rest safely as if it were on an axle stand.

Charlie Smith put an old hydraulic ram from a shear grab to good use by incorporating it into a home-made log splitter.

The framework was fabricated using steel purchased at a local auction, with the beam fashioned out of a length of RSJ and the base from 200mm box section. 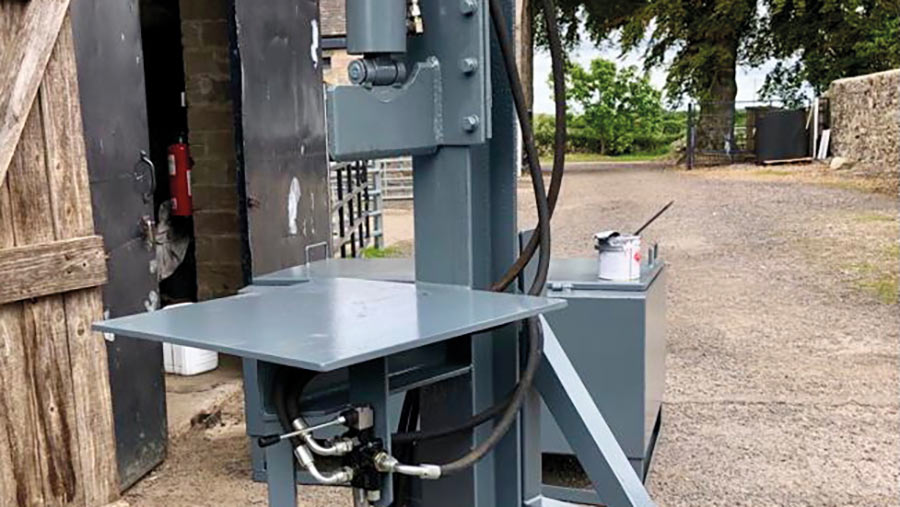 It fits to the tractor via a linkage salvaged from an old muckscraper, and Mr Smith used a piece of faceplate to make the splitting wedge. Thanks to the hefty base, the splitter can be used free standing and it has long hydraulic pipes to connect to a suitable machine.

The splitting platform is set at the height of a potato box, so that split logs can be thrown into the box easily, ready to be carted away with a loader. It’s operated using a safety sprung hydraulic valve. A local mechanic made up the hydraulic hoses.

Daniel Roberts built a neat ATV carrier for the front linkage of his Fendt 516, which has helped to streamline the process of moving stock to outlying parcels of land. 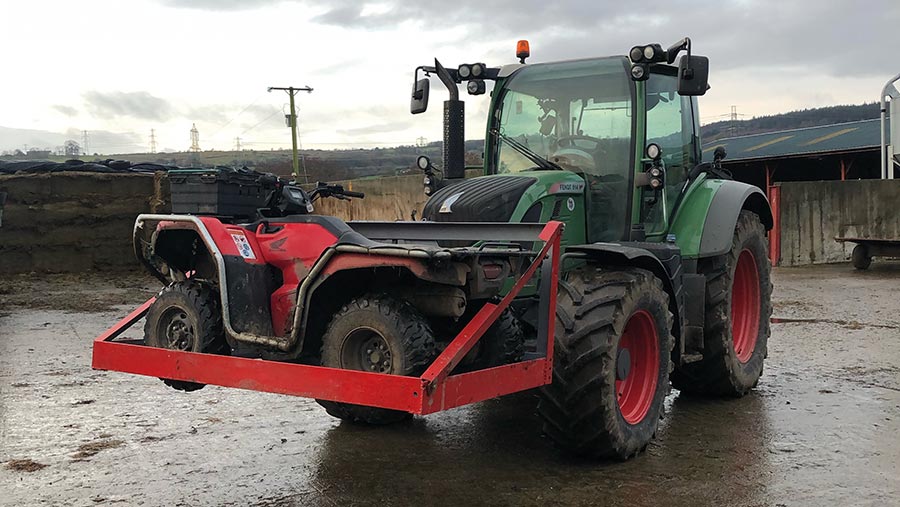 The carrier’s frame is made from angled steel sourced from an old pylon and it has a simple side bar that is removed to allow the ATV to drive on. When the tractor’s linkage raises the frame, the spacing between the angle iron slats on the base allows the quad’s wheels to fall through slightly,  thus holding it in place.

Isle of Bute contractor Ian Reid made a bale wrap holder for the rear link arms of his John Deere 6110 tractor to help him cover more ground without having to nip back to the farm for supplies. 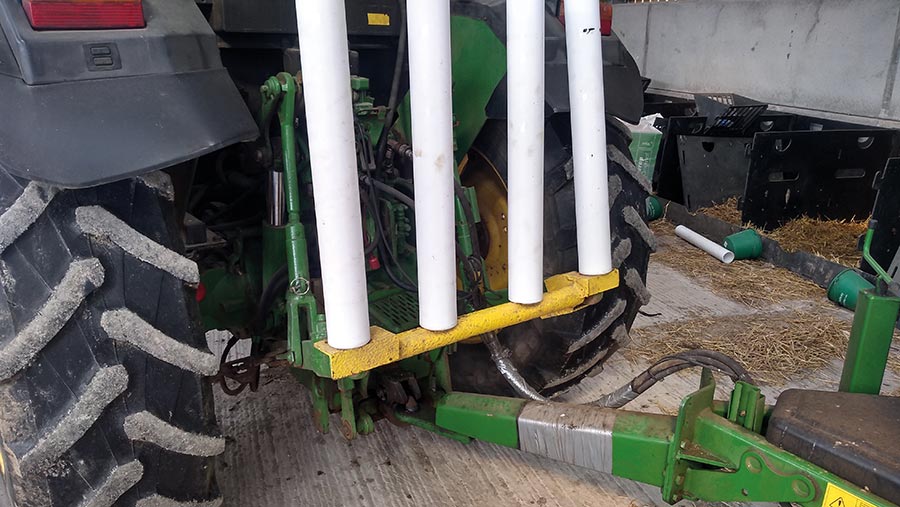 He used the frame from an old Atkinson lime spreader roller and a few bits of angle iron at either end that connect the link arms above the McHale wrapper’s drawbar. He then mounted four lengths of 100mm pipe vertically for the rolls to slide onto. It took a few hours to make and cost nothing.

Bristol-based Dan Hicks made a carrier for his Logic pellet applicator so he could transport a couple of extra bags to the field, saving time and the expense of employing a contractor. 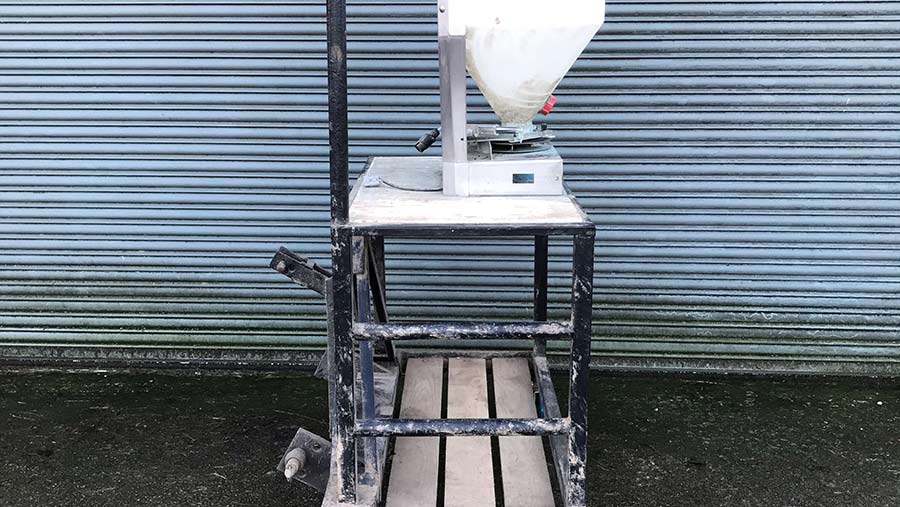 The headstock started life as an unused 1.2m buckrake, and the rest of the frame was built from metal around the yard. His only outlay was £40 for the wheels that make it easier to manhandle. He can carry three bags in the hopper and a further two on the tray, which is ideal for the size of his farm.

James Shipp built a width-adjustable sign for the front of his John Deere 6910 that mirrors the size of the implement behind to warn oncoming traffic. It features no less than three flashing beacons, along with extra work lights, and was finished with a lick of yellow paint. 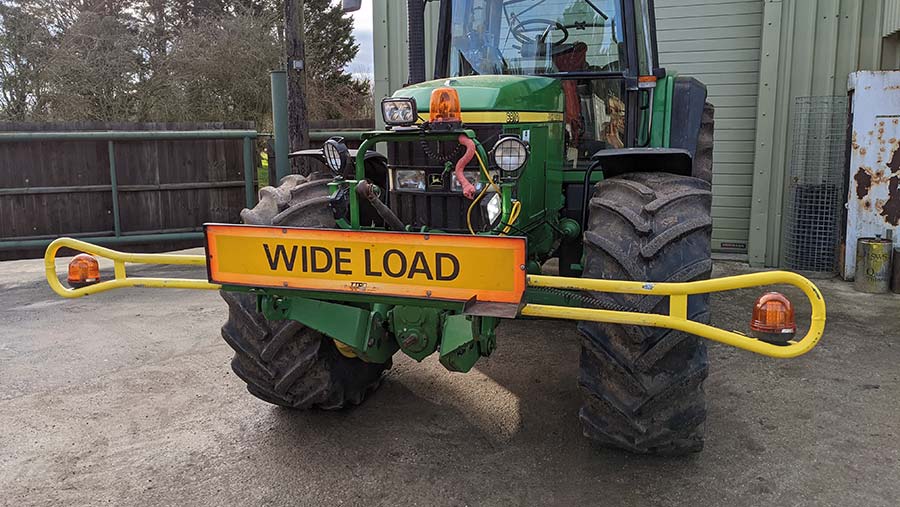 Spilt engine oil is a thing of the past for Jake Northern of Radwell in Hertfordshire thanks to a free-to-make drain pan.

He had found that standard 10-litre buckets didn’t have the capacity to cope with oil and filter changes on tractors, and had to be carefully positioned under the sump plug to avoid messy spillages. 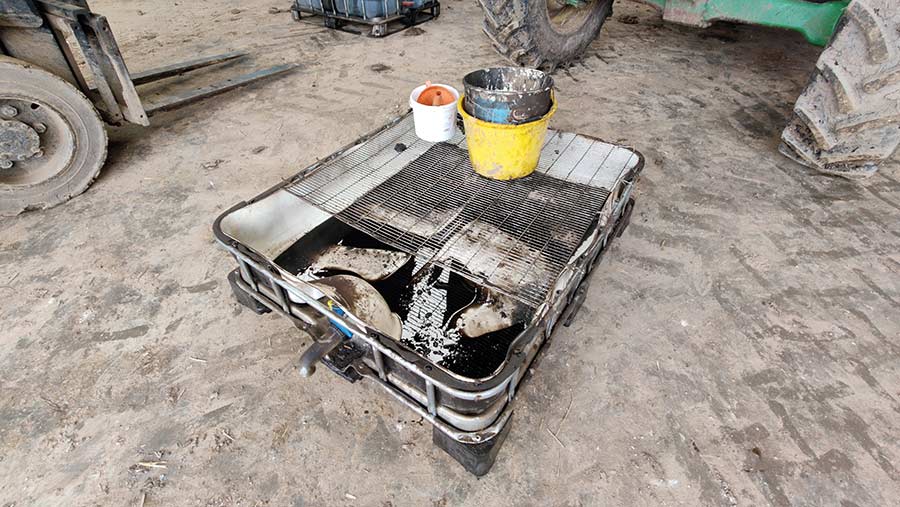 His solution is made from a 1,000-litre IBC, which he hacked down to a 30cm height using a 9in angle grinder to provide a capacity of roughly 150 litres. He then cable-tied some wire mesh over the top to form a drainage board for filters.

It fits comfortably under any tractor, sprayer or combine, is light enough to drag around by hand when empty and is easy to shift about with a forklift when full. The built-in tap makes it simple to drain, too, and it can be stacked on top of other IBCs when not used.

The frame is made from a combination of angled and box-section steel, and includes sleeves to accommodate telehandler forks so it can easily be lifted on and off. 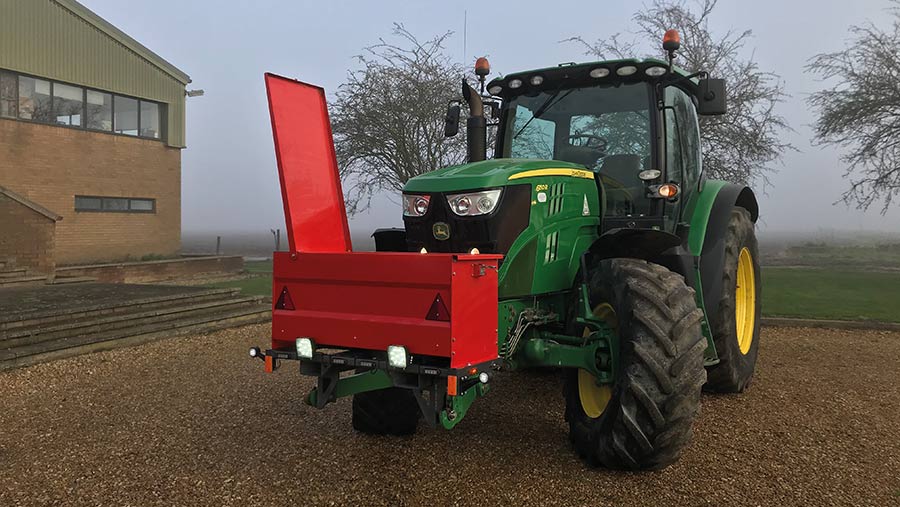 Notable features include LED marker lights, four flashing orange strobe lights and a pair of work lights controlled by a switch on the box. These are all wired into the seven-pin plug, so they illuminate when the tractor’s side lights are turned on.

Mr Kooreman also made a grease gun holder on the back, which includes a blank nipple to save the coupling end flapping around and getting damaged.

After a retro Massey Ferguson 20 small square baler decided to bale its own needles, Wiltshire-based Philip Harvey gave it an unlikely second life by turning it into a log splitter.

He stripped it down, leaving just the gearbox and hydraulic ram from the bale chamber, and set about fitting an electric motor and a 31-1 ratio gearbox from an old rolling road to replace the original pto and flywheel. 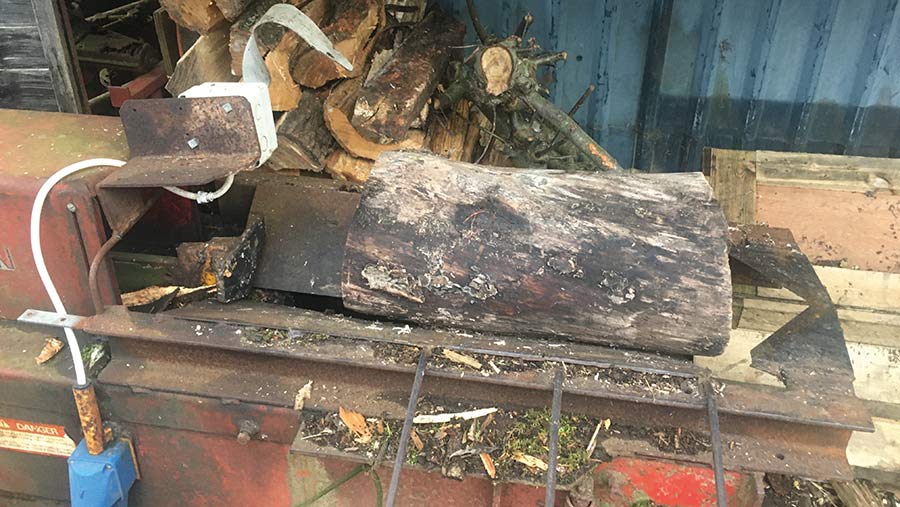 Mr Harvey says this was primarily for safety, as it meant the operator could shut the machine off without moving from the loading position.

Next, he mounted the ram, motor and gearbox on top of the old bale chamber so it would be a comfortable height for splitting. A length of angled steel was added for the logs to sit on before the ram pushes the wood into a splitting blade at the end.

Mr Harvey has split up to 75cm logs in the past, but settled on 60cm as they are easier to handle.

Cornish smallholder Gerald Brown has a simple, but useful, wooden box for his Ferguson T20 loader tractor. His first iteration lasted 17 years and he hopes for the same from his new 1.8m version, which is used for all manner of carting and carrying work. It does more work than any other tool on the smallholding, he says. 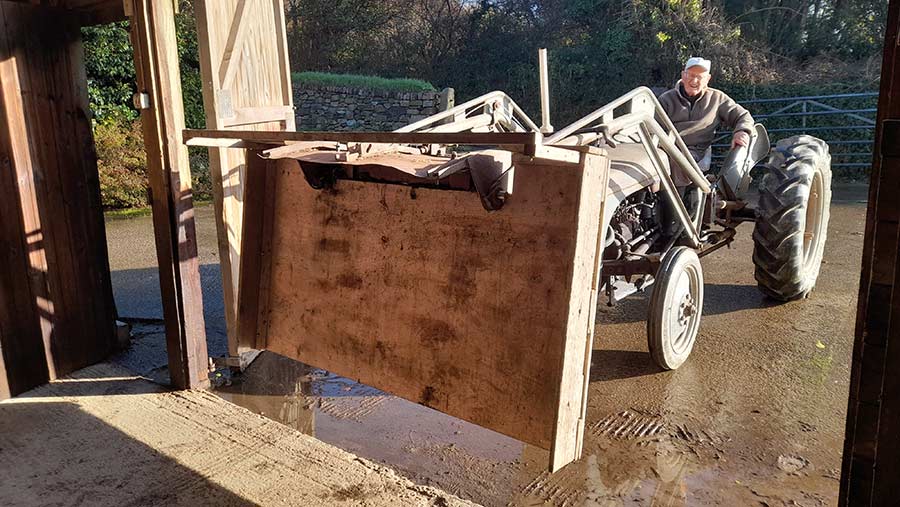