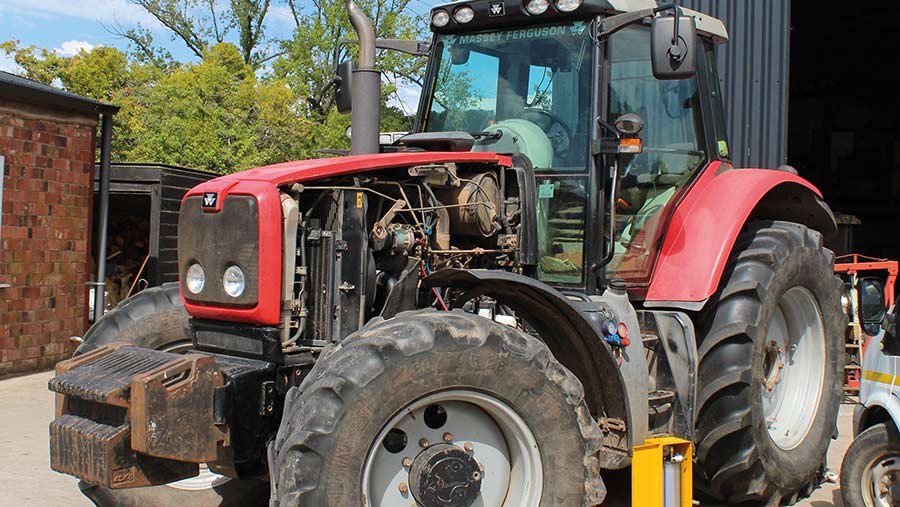 For the mechanically minded operator, it’s often possible to carry out minor repairs in the farm workshop. But with tractors getting ever more complex, there’s an increasing number of jobs that require expert knowledge and equipment.

After 21 years working for a Herefordshire machinery dealer, Steve Hodges set up his own repair business, which he’s been running for the past three years.

He specialises in Massey Ferguson, Fendt and Deutz tractors, plus Merlo telehandlers, all of which he worked on while he was an engineer for Pallisers of Hereford.

As well as carrying out running repairs, he also takes on complete restoration projects.

Below, we take a look at some of Mr Hodges’ recent repairs and he offers a few tips to reduce the likelihood of costly breakdowns. 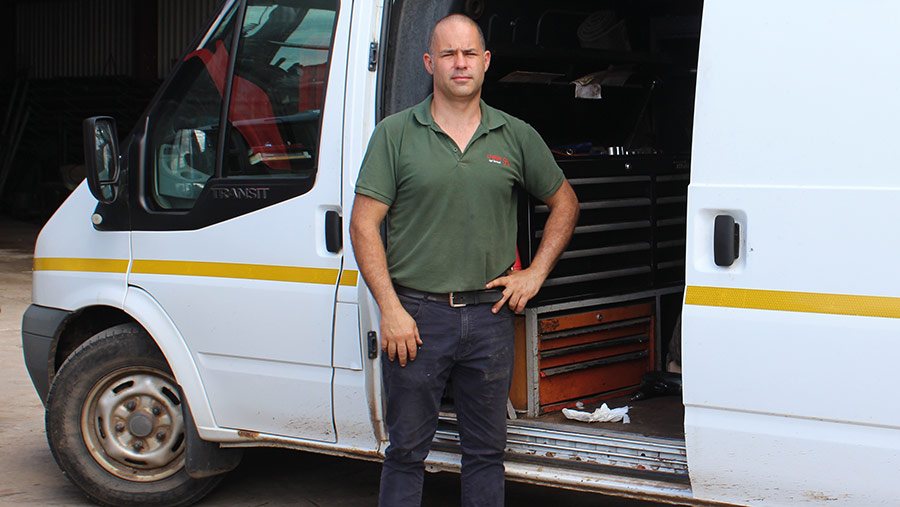 The ubiquitous 6480 had a build run of more than eight years, with early versions featuring a Perkins engine and later models a Sisu.

Problems with the Sisu block are almost unheard of, but Tier 2 and Tier 3 Perkins 1106 engines can give trouble, most of which are linked to the oil pump.

Thankfully, engine failures are pretty rare, but recently a Tier 2 model did have the oil pump pack up completely, causing the engine to seize. In this instance, the gear driving the pump dropped off and caused one of the pistons to seize in the bore.

The result was a complete engine rebuild, with new pistons, liners, a reground crank, new cylinder head and turbo, which had also been starved of oil. The cost to put it right was about £6,500.

There was nothing the operator could do to prevent this particular breakdown, but thankfully it’s a rare occurrence.

A more common oil pump problem is found on Tier 3 Perkins engines, which is easier to diagnose before serious damage is caused.

In these tractors, the bolts holding the pump together can snap, causing it to spring open when it speeds up.

This results in a pulsing of the oil pressure and the light on the dash will flash on and off, accompanied by an error code.

Replacement pumps cost £265 and fitting is a 16-hour job.

Injectors on Tier 3 Perkins blocks are another common problem, and the symptoms are poor starting and an engine knock at low engine rpm.

Replacement injectors cost about £450 each and take two to four hours to replace.

A fairly regular Massey Ferguson breakdown is the flywheel damper, and Mr Hodges has replaced a few in recent months.

The symptoms of a failed unit are a complete loss of drive and a fairly unpleasant banging noise emanating from the bell housing. 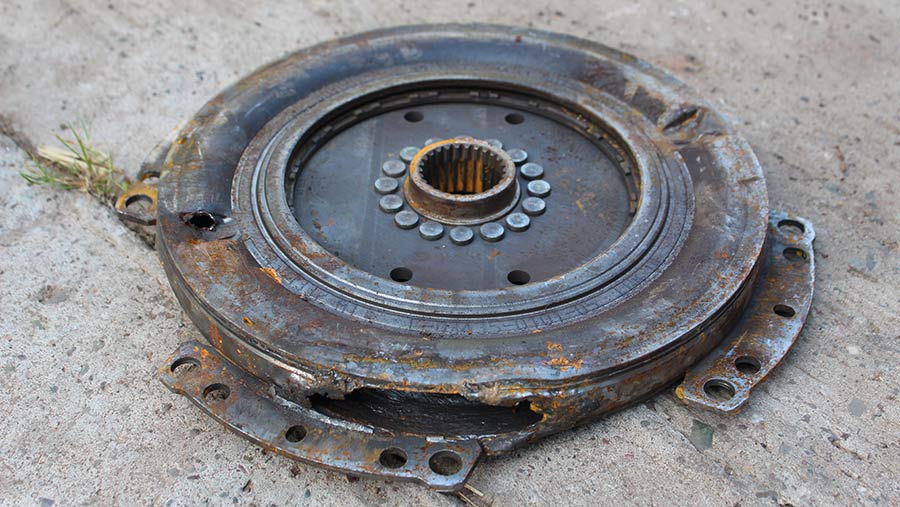 It typically fails between 4,000 and 6,000 hours, when the plates wear through the casing.

Replacement dampers cost about £350 and fitting one is a good day’s labour for an experienced mechanic – most of the work involves splitting the tractor.

A recent example fixed by Mr Hodges was on a 5455, but most models suffer in the same way.

Like all tractors that run a single-oil system, it can be a serious problem if the brakes are worn down to the metal.

A blocked filter warning light is a good indication that the fibre on the discs has started to break up, and if this happens, the operator should stop driving immediately.

If it’s caught at this stage, it’s usually fairly straightforward to flush out the system, but if the tractor is driven for any length of time with the plates metal to metal, filings can pass through the whole back end.

Handbrakes can also fail, typically as a result of operators driving with it engaged.

The discs cost about £40 each and there are two or three in the assembly, depending on the model.

They’re accessed through a side panel on the back end and replacement takes about a day. However, a 6485 has a different back end, so the job can take up to two days.

Range changes on the Dyna-6 transmission are performed electronically via a bank of four solenoids on the side of the transmission, and these can play up.

If the tractor won’t shift between ranges or it refuses to move altogether, these could be the culprits. Occasionally, the switches that are linked to these solenoids are also to blame.

Both are simple to replace – the solenoids cost about £125 and the switches £60.

Mechanically, the Dyna-6 is pretty tough, but versions fitted on larger tractors (such as the 6499) don’t like being knocked about by a big square baler.

The repeated heavy jolting of the ram can cause premature synchro wear and, in extreme cases, shear off driveshafts.

Therefore, tractors with Vario transmissions are a better bet for this sort of work.

Rear diffs can occasionally give trouble, and a recent failure was on a 6480, where the bolts sheared and the diff was found floating around the back end.

The symptoms were a loss of drive to the rear wheels (meaning it would only move in four-wheel drive) and a heavy banging noise from the back.

Fixing it involved removing the top cover – a job that can be done without removing the cab – taking off the rear axles and bolting the diff back in place.

Spool valve detents on 6400-series tractors have a habit of rusting up, making it near impossible to move the levers.

For these tractors, Massey only sells the complete valve, which costs about £1,000. 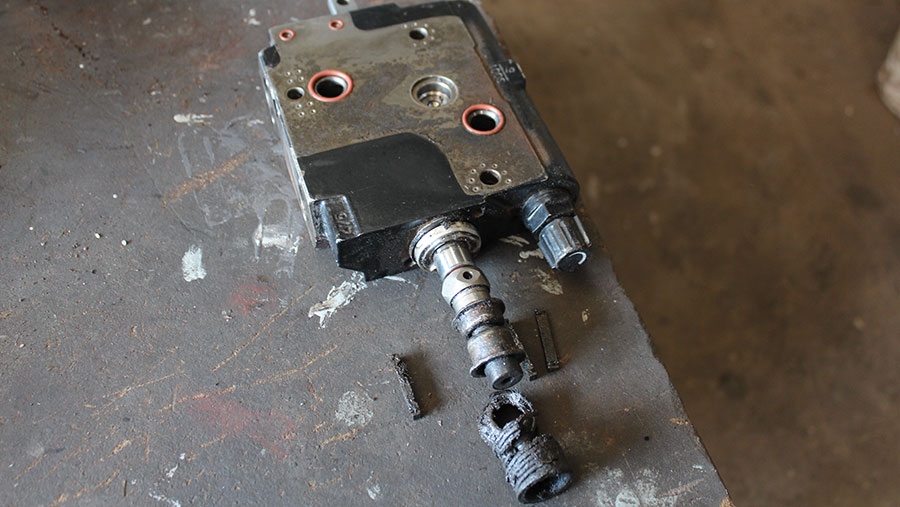 However, it is possible to get hold of detents for 7600 series tractors, which can be modified to fit and only cost £100.

On most Massey models, linkage top arm spines wear over time to the point that they can slip and occasionally break the castings.

The problem is exacerbated when the machine is doing a lot of draft work or has heavy side loads, such as a mounted mower or hedgetrimmer.

It’s generally worth replacing the top arms and shaft together, which cost about £880. It takes roughly four hours.

Most Massey tractors from the 6200-series onwards have a clutch switch that can play up and cause a loss of drive after the pedal has been depressed. Occasionally, it’s accompanied by an error code on the dash.

The aptly named Bottom Of Clutch Switch is situated in the pedal box, and once it has been replaced, the problem should be solved without any additional programming or calibration.