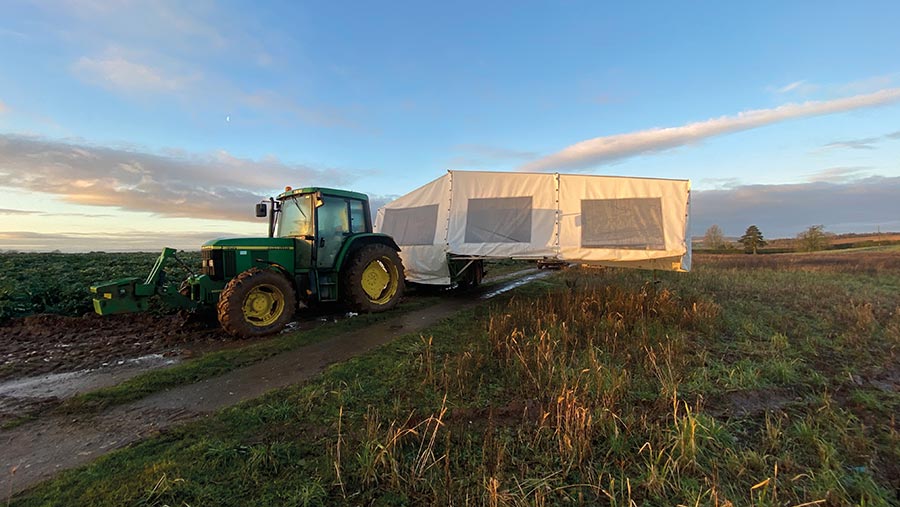 The 23-year-old agricultural engineering student works part-time on the 100ha family farm in Alcester, Warwickshire, where they specialise in producing purple sprouting broccoli – typically harvested by individual pickers between September and March.

To improve the efficiency of the system and save one member of staff sitting in the tractor all day as it crawls across the field, he decided to come up with a means of controlling the rig safely from the trailed picking and packing station.

His first attempt at making things driverless used a small hydrostatically-driven New Holland orchard tractor, but after proving the concept, he set about converting the farm’s John Deere 6210 with a Powr Quad transmission.

He drew the electrical circuit on paper to suss out how it would work and then added a numbered tag to each wire.

This indicates which circuit it relates to and should speed up the process of tracking down any faults.

Controlling a fully mechanical gearbox without being in the cab obviously has its challenges, but Mr Beach settled on an arrangement that sees two electric actuators move the forward/neutral lever and powershift stick.

The actuators are connected to the controls via pins and brackets and have sensors to calculate their position – thus measuring the amount they have to extend or retract to change gear.

For safety reasons, he deliberately avoided making it possible to select reverse.

To control the steering, he tapped into the double-acting ram on the front axle and used signal sensors to determine which direction the wheels should turn. 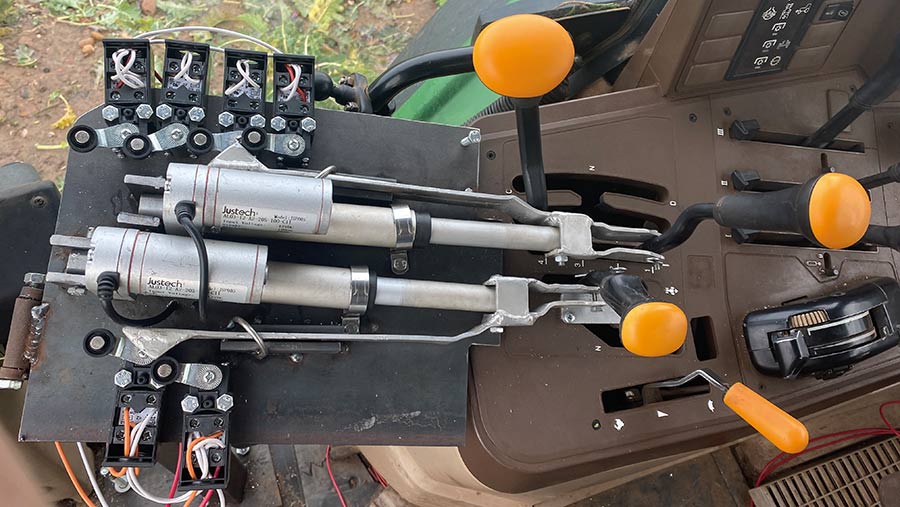 All this means that once a master switch in the cab is engaged, the tractor’s starting and stopping, speed (a very sedate walking pace) and steering can all be managed by the operator standing in the picking trailer behind.

This, too, was home-built and features a large canopy with a 6m conveyor protruding to one side.

As well as protecting the pickers from the elements, it allows them to walk behind while cutting and placing produce on to the conveyor.

The operator on the trailer then packs the broccoli into crates while controlling the tractor remotely.

The prototype version of his trailer was constructed using cheap, second-hand components.

These included a stripped-back Keenan diet feeder chassis – a snip at £300 – which he paired with a £200 conveyor bought on Ebay and a rudimentary tarpaulin that was wrapped around makeshift framework to keep the workers dry.

After proving the trailer setup could work, Mr Beach invested more time designing a bespoke 6m cantilever roof using CAD, which can fold to within 3m.

He then made the hinges on a lathe, TIG welded the aluminium roof in the farm workshop and sourced food-grade equipment throughout. He also built the 6m stainless-steel conveyor.

He added an extra axle, fixing both on top of the chassis to reduce the conveyor’s height and make life easy for the pickers.

The only outsourced parts were the conveyor belt and cover for the cantilever.

Safety features include the trailer’s braking system, which requires pressure to release the anchors – rather than pressure to apply – meaning they are always engaged when stationary.

There are also several emergency stop buttons, which shut the tractor’s engine off instantly and require a manual reset in the cab, and an audible alarm prior to the conveyor starting. This is followed by a 3sec delay before it begins.

Mr Beach is unsure of the final bill but estimates it somewhere around the original £10,000 budget he set himself, with the biggest expenses being the custom-made tarpaulin at £2,500 and £700 for the conveyor.