Farm-built cultivators and drills are a staple of the Farmers Weekly Inventions Competition, and 2020 was no exception.

Aberdeenshire farmer George McWilliam built a cover crop drill for just £400 over the course of a few afternoons last spring.

The outfit is based on an old 5.5m Kongskilde Triple K cultivator, which he bagged for just £150 at a local collective sale. 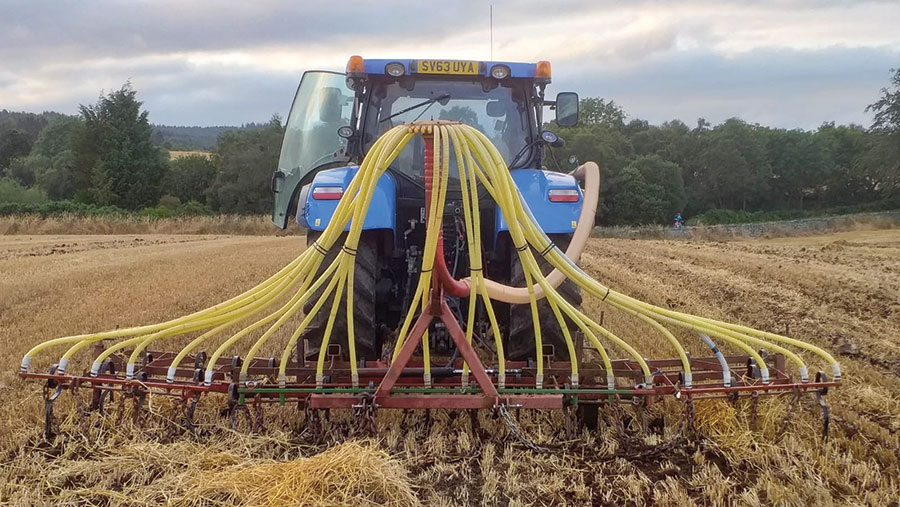 To this, he fitted a recycled Accord distributor head (£50) and fabricated his own spreader plates to run along the back of the cultivator.

New pipework finished the job and an Amazone front hopper – already on the farm – holds and meters the seed.

Mr McWilliam drills the crops directly into barley stubble in August and has so far sown 40ha, with decent, uniform results.

The cover crop will then be ploughed in prior to spring barley sowing this year.

Compared with previous systems, the new drill pulls fewer stones to the surface, and is quick and cheap to run. It could also be used to sow grass seed, he says. 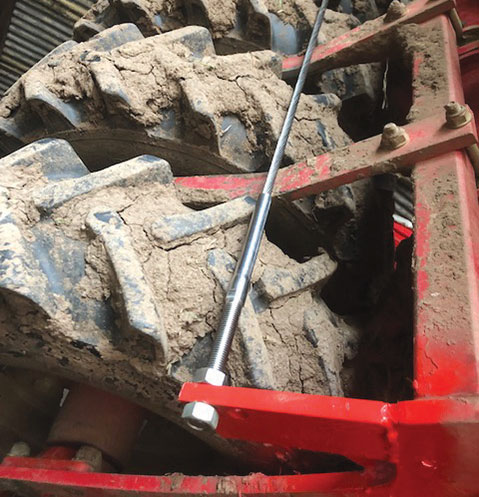 Wet conditions have been bunging up drills across the country, but Rob Gash has come up with a neat way of keeping packer rollers relatively clean.

His cable scrapers fit to new brackets welded on the farm’s Horsch Pronto drill, flicking soil off the tyres and avoiding any build-up of material against the main frame.

The brackets have several hole options to vary the distance of the cable from the tyres.

Total cost was £200, and assembly took just a day. 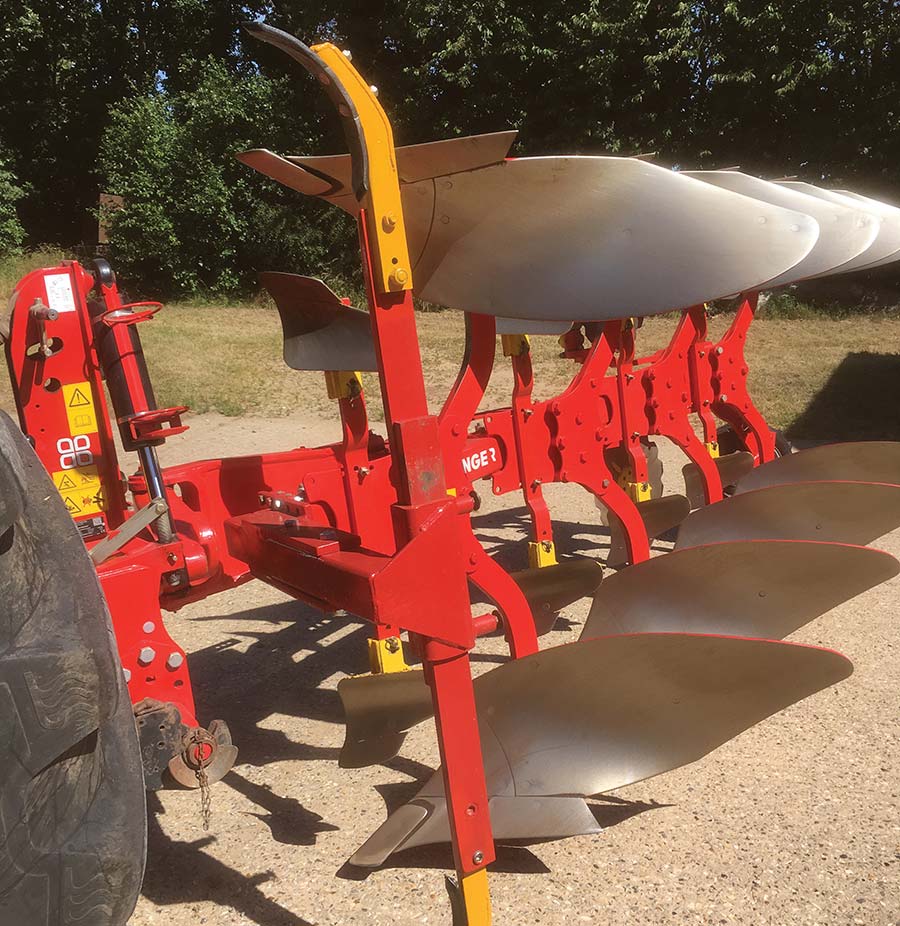 Rock-hard furrow bottoms could be a thing of the past with Geoff Beck’s bolt-on plough attachment.

The leg is designed to break up soil compacted by the tractor’s wheels, using a curved cultivator tine to throw the soil ahead of the mouldboards.

Mr Beck says he typically runs it 7.5-10cm below the plough’s points, so roughly 35cm when ploughing at 25cm.

The kit has hole-and-pin height and width adjustment and it can be pulled out completely if not needed. 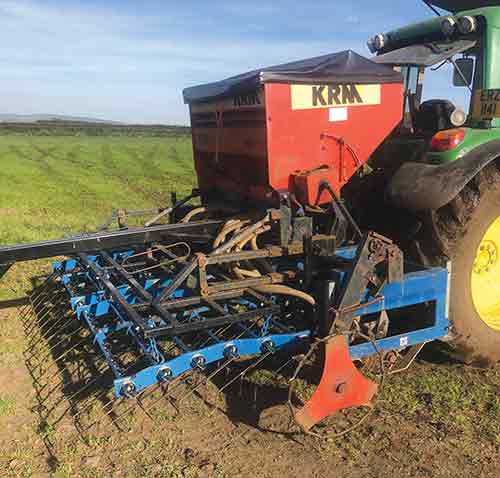 The high rainfall in Northern Ireland means Mr Houston’s 200-strong autumn-calving herd can quickly destroy parts of a field, so he started looking around on Facebook and Gumtree for a seed drill and grass harrow to help alleviate the compaction.

His combination centres around a second-hand KRM air drill, which he managed to get for half the asking price, as well as two grass harrows and a brand-new Fleming Agri 3m spiker.

In order to covert the grain drill to sow grass, Mr Houston blocked off half the seed rollers to lower the rate. He says this has worked perfectly.

He has also removed the bout markers and tramline kit and believes the simple ground-driven wheel is all that is needed.

All in, the build cost about £3,000, and this included the purchase of the new spiker. Once all the parts were delivered, it took a couple of days to knock up. 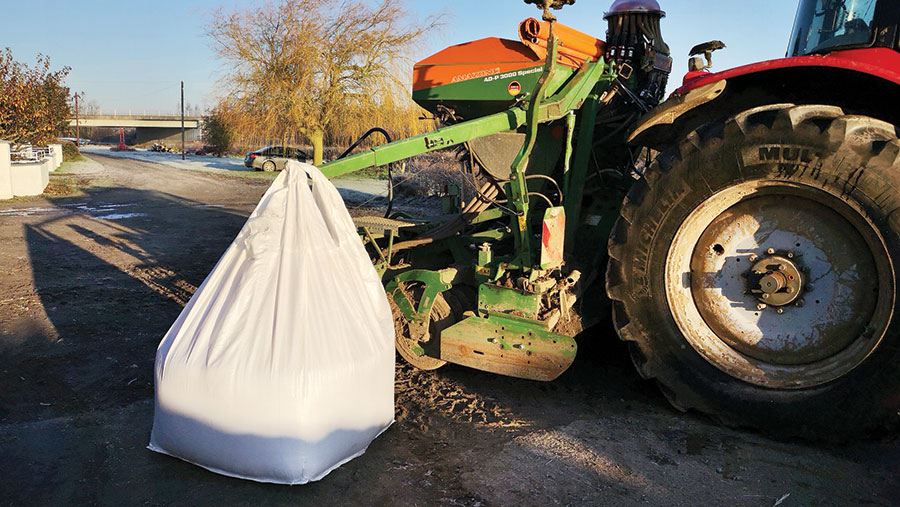 Paul O’Connell from County Laois, Ireland, made a hydraulic bag lifter for his Amazone Combi drill, so he doesn’t need a separate tractor and loader for topping up with seed.

The device has a simple central mast with one pivot point and a single long-stroke hydraulic ram to do the lifting.

Cleverly, Mr O’Connell set up the geometry in such a way that the bag can be lifted from the side and it comes up perfectly in line with the top of the hopper.

It is capable of lifting bags from the ground or off a trailer, and has telescopic adjustment to get the placement right.

When it’s not in use, the arm can be neatly folded to the side of the machine. 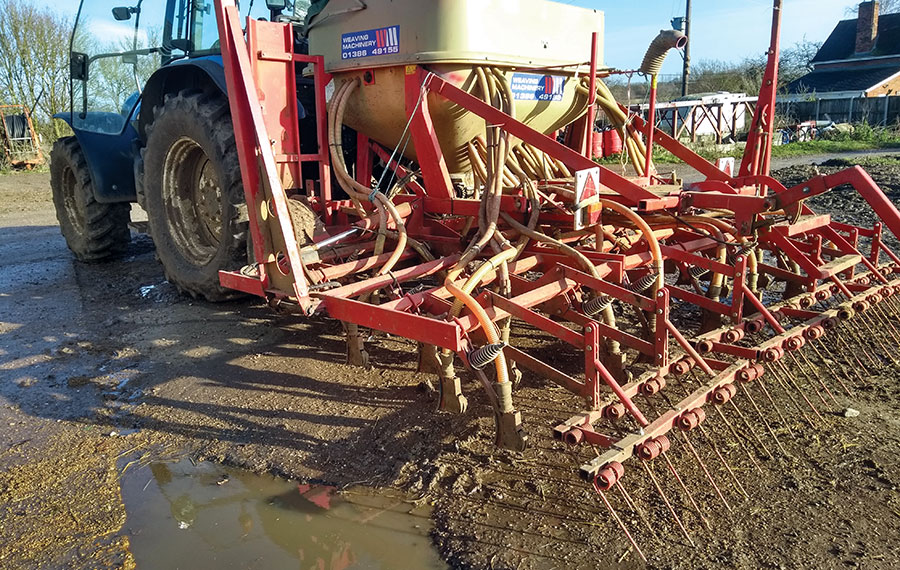 To improve the performance of his 4m Weaving Tine drill on min-tilled ground with chopped straw, Essex farmer Edward Heath extended the frame and spread the coulters over an extra two rows.

As his drill is an early model, the coulters were originally spread over three rows and they tended to clog up when there were large quantities of straw.

However, by distributing them over five rows, he now has ample clearance for trashy conditions.

Mr Heath says the modification was relatively straightforward and involved cutting off the following harrow and pre-em markers, adding the additional rows of diagonally mounted box section and then reattaching the harrow and markers.

Finally, he added some seed pipe joiners and extensions to span the extra distance to the coulters.

He considered adding a second pivot point for folding mechanism, but having tested it in its standard form, decided it was already strong enough.