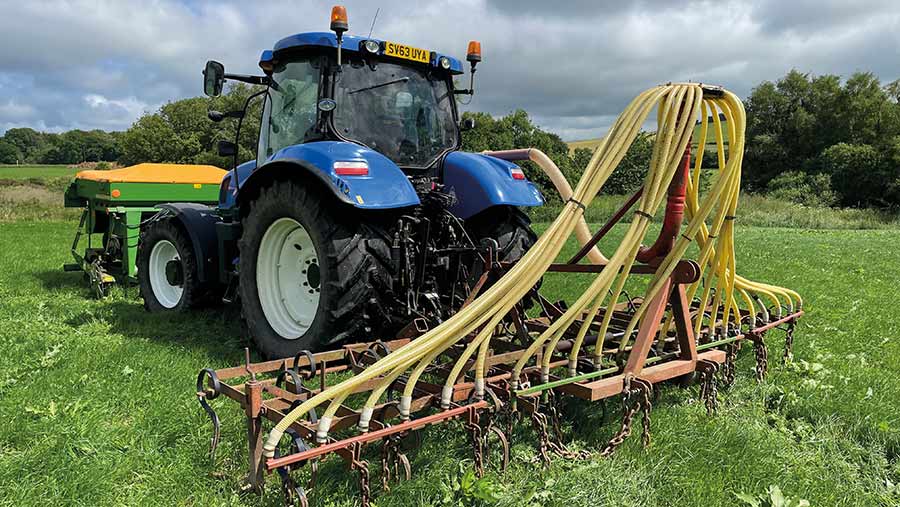 Armed with nothing but his thinking cap and a princely £500 budget, George McWilliam cobbled together a bespoke drill that has allowed him to successfully integrate cover crops into his barley-only rotation.

The harsh winter weather at Pitcaple, just outside Inverurie, in the shadow of the Bennachie hills, prevents him from making more extreme changes to his establishment system.

He still relies on the trusted combination of plough and power-harrow combi drill, but the addition of a green mix has helped improve soil structure, drilling timeliness and, ultimately, barley yields and quality.

Before dabbling with cover crops, Mr McWilliam had routinely spread cattle manure and introduced grass to the rotation in an effort to improve soil condition.

However, he found his light ground still lacked structure and stubbles had little protection over winter, leaving them less friable in the spring.

In turn, this meant delaying spring ploughing and drilling, which was having a knock-on effect on yields.

The solution was to slot a cover crop between winter barley harvest and spring barley drilling, with a mix of species that root to different depths to bind the soil together, attract insects and form air channels that allow the ground to warm quicker. 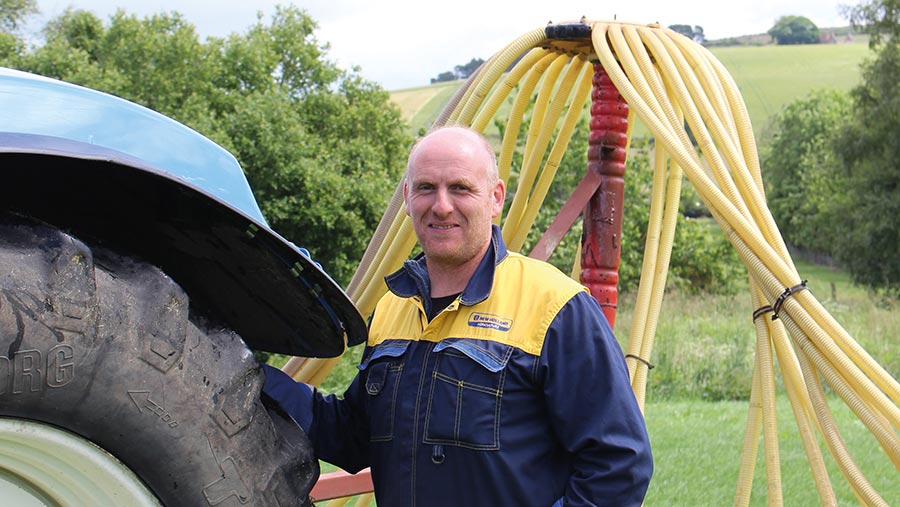 Ploughing is still an essential part of Mr McWilliam’s establishment system, to bury trash, loosen the soil and let warm air in prior to spring drilling.

“The heat is essential for getting malting-grade spring barley drilled as early as possible, once the worst of the winter weather has passed,” says Mr McWilliam.

“But the ground in some of my fields was tacky and lifeless, dirt would stick to the plough and the furrows weren’t folding over completely.”

For his first attempt at cover cropping, in 2016, he used a Kverneland spring tine cultivator to loosen and mix a thin layer of topsoil and then made another pass with his power-harrow drill to sow the seed.

“What I was going to sow was a bit of guessing game. At the time, my local seed merchant, Murray Duguid, had advised very little on cover crops as there wasn’t much interest in them in Scotland.”

“We settled on a mix of mustard, phacelia, vetch, red and white clover, along with rye grass – which I was a bit unsure about given how hard it is to get rid of.

I could have added in a cereal crop, but I thought enough falls out the back of the combine and chits naturally.”

Building a drill on a budget

Although successful, the make-shift establishment method disturbed too much soil and dragged stones to the surface.

It was also a slow job at a busy time of year, so Mr McWilliam set about coming up with a more efficient alternative.

After a brief look at ready-made options, he visited his local Thainstone collective auction and snapped up a 6m Kongskilde Triple K cultivator for £150 that would form the base of the drill.

It came with new pigtail tines and a frame for attaching the Accord mushroom-shaped distribution head he bought from a local dealer for £50.

A further £300 was spent on plastic pipework to transfer seed from a front-mounted Amazone hopper (which he already owned) to the Accord distribution head, and from there to 24 home-made deflector plates, spaced at 250mm behind the tines. 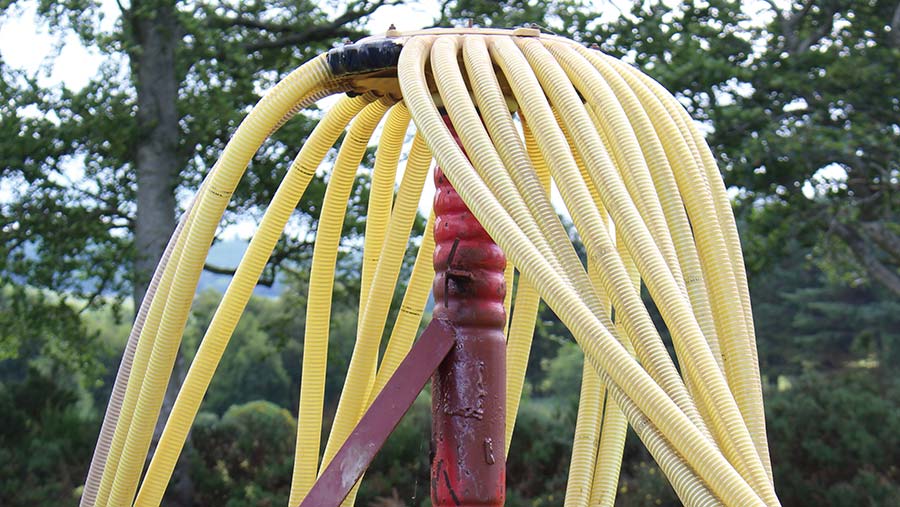 Handily, the cultivator wings folded vertically, rather than over-centring to the middle for transport.

This meant there was space for the distribution head to sit on the machine, avoiding the faff of fabricating a new frame to mount it behind the cultivator.

One of the bigger challenges was to adapt the Amazone metering block to suit small seeds and low rates, rather than the high volumes of fertiliser it was designed for.

Although buying a new metering unit was an option, Mr McWilliam kept things cheap by wrapping electrical tape around the block to reduce the depth of each metering hole.

The join from one partition to the next around the circular block meant a small amount of seed could still sit in the recess of the tape. 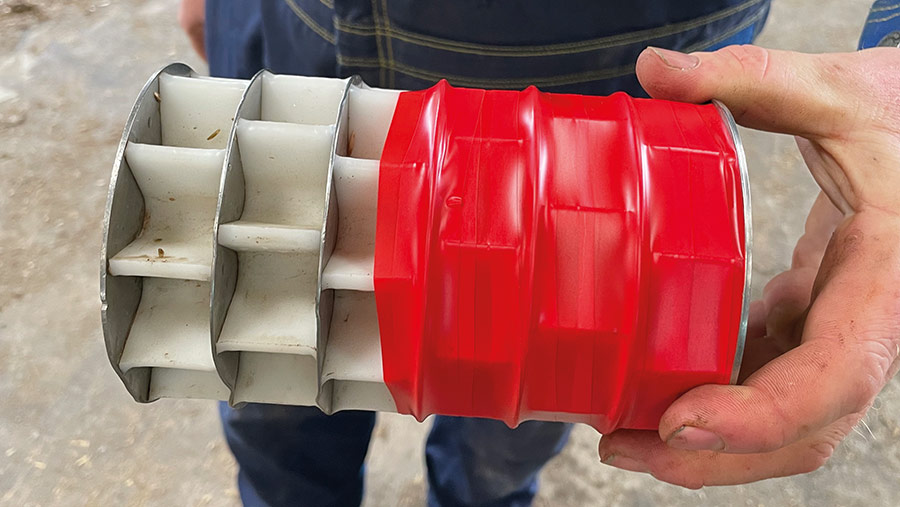 As a result, at a forward speed of 10kph, the drill sows roughly 7kg/ha of seed, and the metering scale on the Amazone hopper is set between 30 and 35.

One small change he is planning to make is to add wheels on both wings to replace the skids, which should keep the depth of the tines more uniform and prevent them dragging themselves deeper into soft ground.

“Discs would be nice, but they’re expensive and the extra horsepower necessary to pull a 6m-wide disc cultivator makes them unjustifiable for my 90ha of spring barley,” says Mr McWilliam. 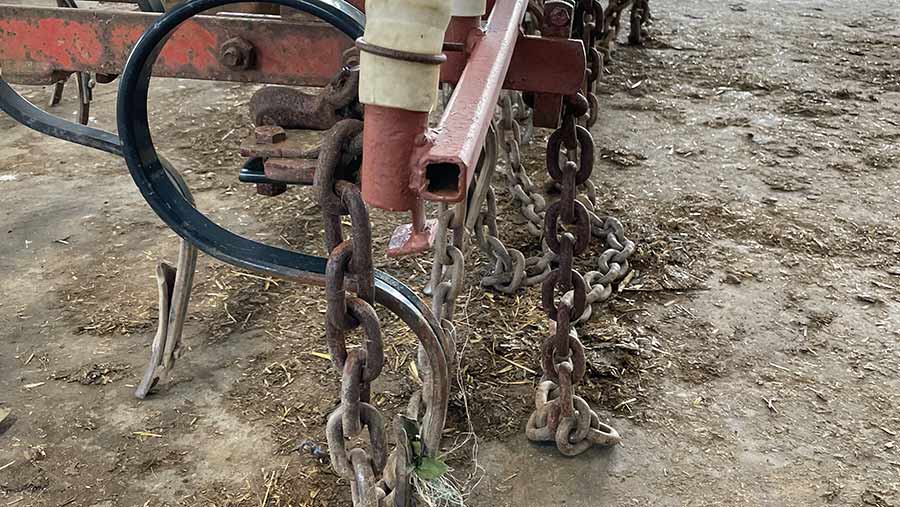 Since his first cover crop concoction, the mix has been fine-tuned to feature varieties that improve soil structure, provide blanket field coverage and can be easily destroyed by the farm’s 6m Cambridge rolls after a hard January frost. 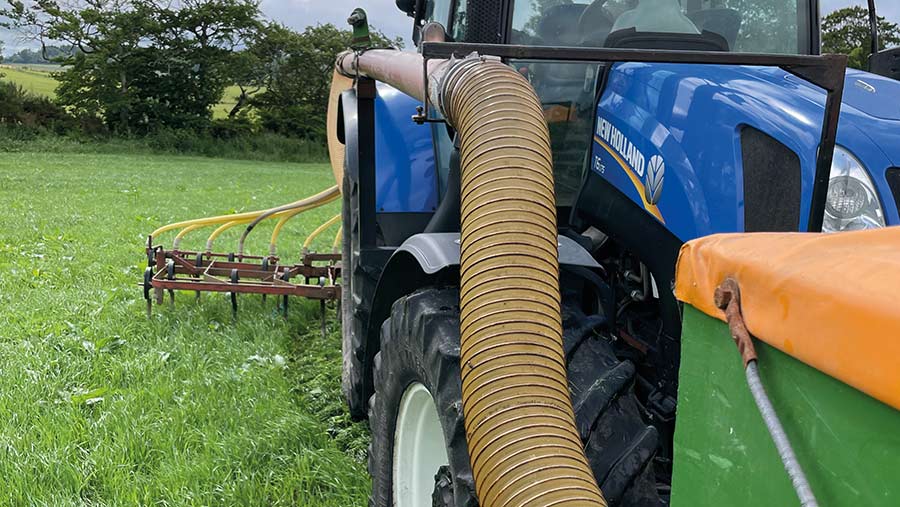 “I found out early on that dealing with mustard in this way was impossible – it just springs back up behind the rolls while everything else remains flat,” he says.

“Some years it could still be flowering until the end of November and its height meant it stuck up out of the furrows in the spring and made everything look untidy.”

So, three years ago, he decided to replace mustard with radish, which has a long tap root to penetrate the soil and good-sized leaves to improve ground cover.

And crimson clover has replaced the rye grass, as it grows quickly and will fill any gaps that are left between the taller species.

Phacelia has always been part of Mr McWilliam’s green mix, with its bright flowers attracting insects during the autumn months and a fibrous, shallow root system binding the top layer of soil.

This factor alone has meant the soil is now more friable when the plough enters the field. The ground also travels better, he says, and has a root structure capable of shedding water quicker.

“One of my fields is right on the brae and is some of the most challenging soil I have, but this spring it ploughed over the best I have ever known it. Without fail, my highest-yielding crops of spring barley are always following a winter cover crop,” says Mr McWilliam.

Farmers Weekly‘s annual Inventions Competition is open for entries, so if you’ve constructed something simple, high-tech or anything in between then we want to hear from you. Just email oliver.mark@markallengroup.com with a few details about the machine, pictures, and a contact phone number.