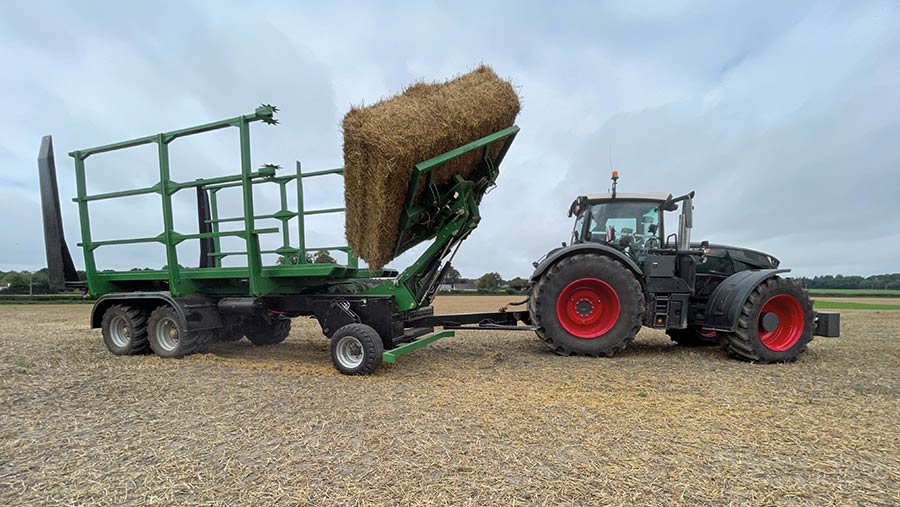 A majority of the machinery knocked together in a farm workshop has a certain rustic charm that comes from putting it in the field before applying the finishing touches.

Not so for Wiltshire farmer and contractor Peter Williams, who has recently completed a six-year project to build a custom bale chaser.

See also: How to build your own tractor autosteer system for £700

With 485ha of arable cropping of their own and a joint-venture baling business – Southern Hay and Straw – the Williams family have a fairly intense harvest period that sees combining and straw clearance come at once.

“At any one time we might have up to nine balers out working, which can mean there are tens of thousands of bales scattered across the farms where we buy straw,” explains Mr Williams.

“Understandably, farmers want their fields cleared as quickly as possible and we generally use a combination of telehandlers and chasers to get the job done.” 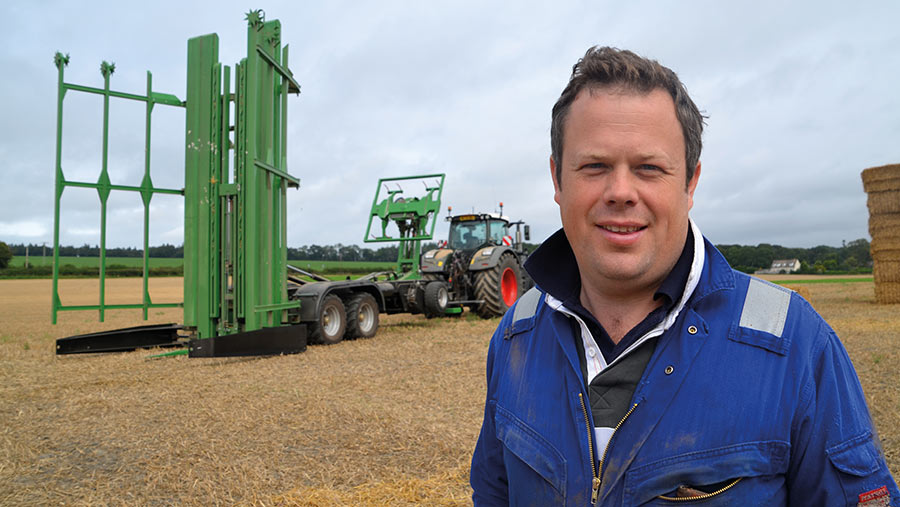 To that end, back in 2010 he built his own stack mover to speed up getting straw shifted. It is based on an old lorry chassis and works much like the “56-squeeze” small bale carriers from days of old.

The process sees a loader stack the 120x70cm bales in packs of up to 14. The trailer then backs up to the stack with its gates ajar and lower pincers opened out, the bales are squeezed up tight and the whole lot then folds flat onto the chassis for transport.

Once at the main stack the procedure is reversed, with the pack sat upright once again. (The bale stacker trailer got a mention in dispatches in Farmers Weekly’s 2011 Farm Inventions Competition).

A big advantage of this setup is in using a loader to build the stack with the bales crossed, which ties the whole pack together – a necessity on the steeply rolling ground across the southern edge of Salisbury Plain.

“When we started out with the baling business we tried a number of different bale chasers. They worked well in clearing fields but, because the bales weren’t crossed, the stacks tended to fall over.”

This prompted Mr Williams to start thinking about designing his own chaser capable of forming stacks with bales in each layer running perpendicular to those above and below. 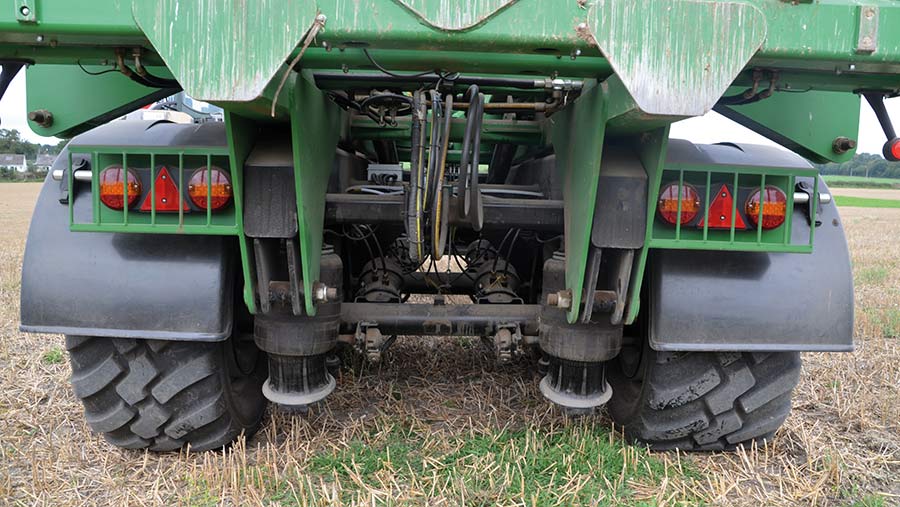 Fast-forward six years and the result emerged from the farm workshop midway through this harvest for some initial field testing.

“We had spent many hours trying to ensure that the chaser was ready to be trialled this season.

“Unbelievably, we hitched it up, ran through the hydraulic cycles a few times, tweaked a few sensor positions and went picking up bales.

“From the off it performed as we’d hoped, so we carried on and shifted more than 700 bales, clearing them at a rate of about 80/hour.

“That’s not as quick as we’d like, but it was a good start given all the setbacks we’d had in the design and build phases.” 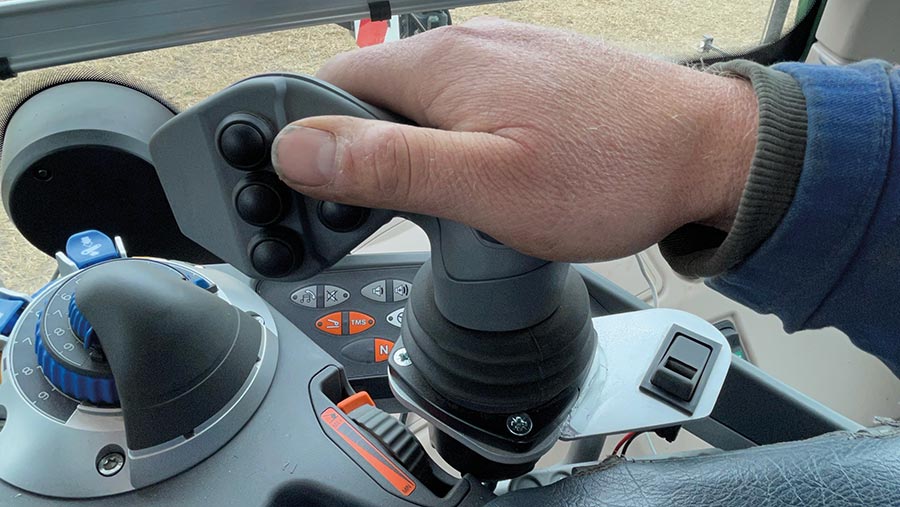 Why build you own?

“As well as having a machine that would cross the bales, we needed a chaser that could handle a range of different sizes and weights.

“My original stacker trailer is capable of reliably shifting more than 1,000 bales/day, so it formed the basis of the idea.

“Initially we started out drawing sketches on the concrete with chalk, but it quickly became apparent that we would need something a bit more sophisticated than that.

“So, I went to PC World, bought a CAD [computer-aided design] drawing software package and set about teaching myself how to use it.”

With the help of retired engineer Tim Stangle, a design began to take shape.

“I wanted to start from the ground up, rather than using an old lorry chassis and putting it together on the hoof.

“And as it’s far more complex than the old stacker, it made sense to use CAD to work out all the angles, ram lengths and suchlike before firing up the welder.

“That meant I could get the metal precision-cut prior to assembling anything.” 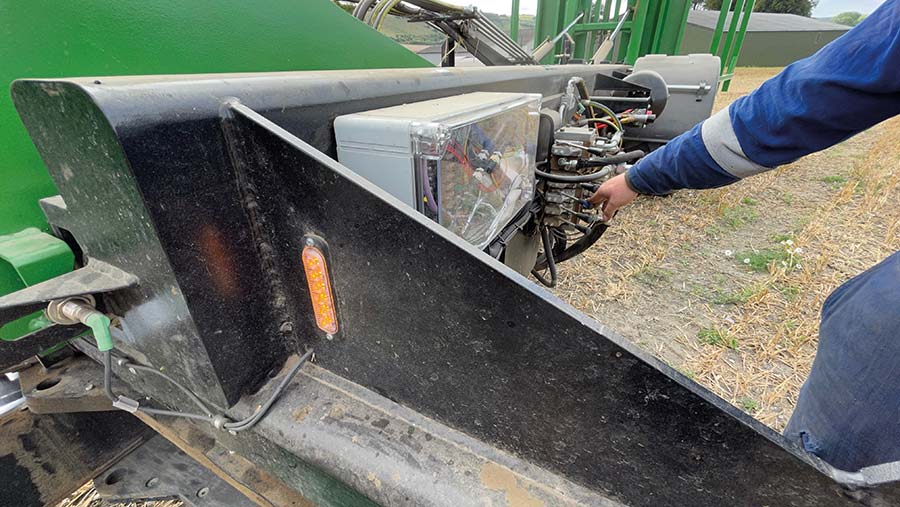 In addition to electronic actuators, the valve chest has old-fashioned levers to enable the chaser to be operated from the ground for testing purposes © Nick Fone

Air suspension provides the flexibility to maintain ride height, irrespective of the load carried, and a pair of high-speed Granning axles were sourced complete with full-spec commercial air brakes and 560mm-wide flotation tyres.

“I’d learned from before that one of the critical things was to have the main tipping bed pivot as low at the back of the chassis as possible.

“That meant we could give the tip rams maximum leverage when raising the stack upright.

“That’s essential given the weights we’re dealing with. Bales coming out of our eight-string Krone BigPack 1290 can tip the scales at nearly 700kg. With 12 of them in a stack it soon adds up to a fair load.” 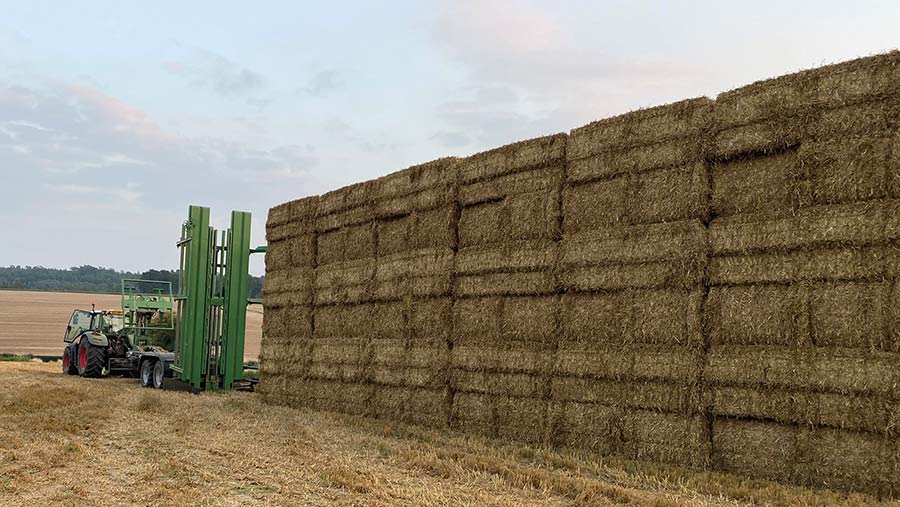 The pick-up head at the business end of the machine took a lot of careful thought.

As well as being able to hoist pairs of bales up onto the load bed, it needed to be capable of rotating them through 90deg so that every layer crossed its neighbour.

Equipped with curved tines, pairs of grab-like jaws mounted on a square frame bite into each bale – the first being carried to the second, before they are both lifted and flipped over onto the bed.

It’s a complex setup that uses a combination of solenoid-operated and mechanical sequence valves.

Carrying such weight puts a great deal of strain on all the components, with the lift arc generating huge leverage forces.

To overcome this, an over-centre valve slows the flow of oil to stop the bales hitting the bed with a bang, and a pair of rams, piped to gas-filled accumulators, cushion the pivoting frame as it reaches the end of its travel.

Much like any other bale chaser, pairs of gates on either side of the body are used to guide and secure bales into place.

A centre spike running on rollers in a channel down the middle of the deck provides resistance, thanks to a hydraulic relief valve, ensuring the stack is kept tightly packed together while the pick-up head pushes the bales along the body.

This process is aided by pairs of one-way star-wheels on the front frame of the gates.

Using simple sprag-clutch bearings, they grip to ensure the bales can’t travel forwards as the chaser bumps across stubbles and over tramlines.

Along with pincer jaws at the back of the deck, the gates clamp up once the chaser is full, holding the pack securely for transport and as it is raised upright at the stack.

Their vice-like grip is released before the driver sets back off to the field to gather another pack.

One unique feature of the chaser is its bale-ejector system.

Designed to deal with part-loads, 12 pairs of wedges are set in channels running the length of the bed.

A long-stroke ram shunts them backwards and forwards as an ejector would in a big square baler, propelling the part stack to the back of the deck.

When the body then tips there is no thump as gravity takes over.

Anyone who is into building their own kit is bound to come up against the odd hydraulic hiccup.

To make the whole job of calculating flow rates, pressures, ram bores and strokes easier there are a number of smartphone apps available.

Peter Williams uses the free Hydraulic Cylinder Calculator to work out required ram sizes and so on.

The chaser has a pretty clever control arrangement to manage the 10 or so hydraulic functions.

With different operations taking place simultaneously, a load-sensing Power Beyond feed is required from the tractor to provide oil flow for a six-slice Danfoss valve block.

As well as solenoid actuators, it also has manual lever controls to enable it to be operated from the ground.

The complicated stuff is handled by an electronic control unit and fuseboard, with a rash of proximity sensors all over the machine telling the computer controller the exact position of each moving part.

An electronic joystick in the cab completes the control setup, and the whole lot is linked together via a Canbus network to limit the number of cables needed to make everything work.

With the help of freelance control systems engineer Tom Bradbury, Mr Williams drew up a comprehensive outline of the various sequences required.

A third-party programmer was then used to put together a software package that would run the machine, ensuring that the various functions worked without any bits of heavy metal clashing in the various hydraulic cycles required.

As an example, the computer controller will not allow the pick-up head to rotate until it has lifted clear of the tractor mudguard height, hopefully avoiding expensive insurance claims.

There are inevitable pitfalls that come to light when building any machine, and Peter Williams has had his fair share. Here are some of them:

This season’s brief test runs with the chaser proved the concept worked but, inevitably, tweaks are needed to refine its operation.

“Although we were running bales in at a rate of 80/hour, I’d like to think we could get closer to 120,” says Mr Williams.

“It’s generally hydraulic cycle speed that is slowing things down. On a simple level I think swapping the half-inch pipework for three-quarter-inch will make a difference, but there are certain key bottlenecks that need dealing with.

“The main head push-back ram is a big-bore, long-stroke cylinder that draws a lot of oil and takes eight seconds to complete its cycle.

“We need to find a way of speeding that up, possibly by replacing the control valves with ones that don’t restrict flow as much.”

The other issue slowing work-rates is that the current controls require input from the operator to prompt each phase of the loading cycle.

The next development will see the control software updated to automate the process, inevitably requiring more sensors to be added, particularly in and around the front bale-bumper.

And adapting the bed’s centre spike to fold back flush with the load deck would make it possible to use the chaser to pick up complete stacks to ferry them back to HQ once fields are cleared.