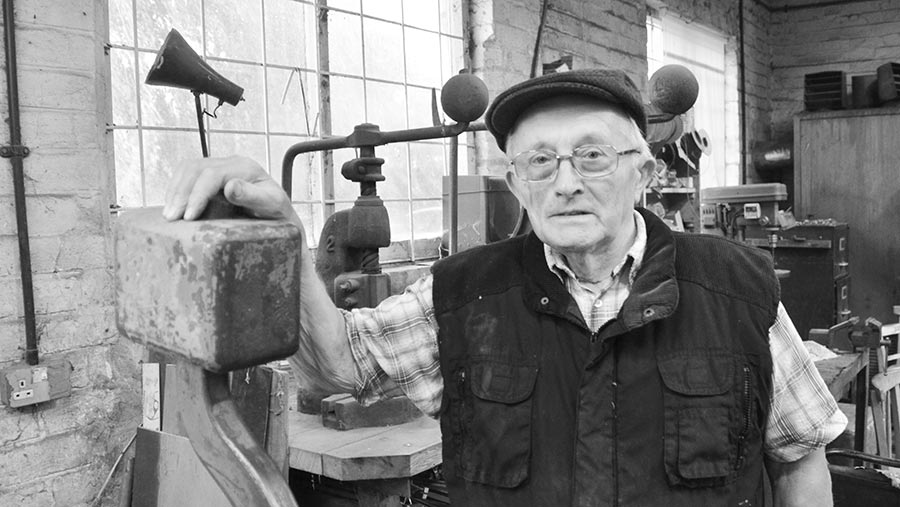 Eighty-six-year-old Nottinghamshire farmer Arthur Howick has something of a reputation in the local area as the go-to person for problem solving and fixing.

But his influence spreads much further afield than that, having built a whole raft of machines over the past six decades, including more than 400 specialist nursery seeding machines that have been sold across the globe.

But it has been his ability to make good and mend that has proved essential to the family business, creating self-propelled potato harvesters, zero-grazers, an automated grass-drying system and barns grafted from old electricity pylons.

His mechanical know-how has also meant that the farm has managed to keep its mainstream machinery running costs to a minimum – a good example being two 43-year-old Laverda combines that are still going strong.

What got you interested in farm machinery and where did you learn your trade?

Growing up on a farm, I naturally had an interest in the equipment needed.

By the age of 16, I had taught myself how to strip down an old Fordson Standard engine.

But it wasn’t until I turned 18 and did my national service that this really developed.

I was trained up as an aero-engine mechanic in the RAF, servicing the twin 2,000hp engines on Vickers Varsity trainers.

But it was while I was on the base that I got talking to a team of guys doing a heating system revamp.

They were using gas welding kits and that sparked my interest.

When I returned to the farm, I managed to persuade my father to splash out on an oxy-acetylene kit and I started building gates, trailers and all sorts of other things.

I then saved up for an arc welder, which revolutionised the job.

The first one I had was air-cooled and wasn’t really up to heavy work, so I eventually upgraded to an oil-cooled Oxford, which I could weld with all day long.

What qualifications and training did you get?

None – I just had four months aero-engine training in the RAF. Everything else I’ve learned from trial and error.

What was your first big invention?

We had a Massey 726 combine but no way of dealing with damp grain, so I built a barrel/paddle dryer that used a petrol-engine-driven fan to provide airflow and a bit of heat.

The next development was a trailer dryer that had a fan that could blow grain up into the loft. It had a 21kW heater bank and could handle about 2t at a time – not a lot, but better than nothing at all.

The next big thing was a grass drying plant to store hay for our dairy cows.

Dad had always maintained that proteins were preserved better in dry grass than silage but the challenge was getting it into a 90x40ft barn, 10ft deep.

We picked it up in the field with an old David Brown flail chopper and the trailers were then tipped in a muckspreader-style dump box, which teased the crop out before it was whisked away up into the apex of the roof on conveyors.

The tricky bit was designing a way to disperse the grass evenly across the length and breadth of the shed automatically.

In the end, I came up with the idea of a spinning rotor that travelled up and down the length of the central belt on a series of cables and pulleys, distributing grass out to both sides in layers.

A below-ground tunnel with grid-weld laterals then provided enough airflow to dry the crop.

What was your most complex project?

Back in the 1960s, we had an old tractor-mounted Faun single-row potato harvester.

But it didn’t have enough separation area and we wanted to get away from having a tractor up front that could run the ground down in bad conditions, creating more clods.

So in 1968, I set about building a self-propelled harvester.

It started out with a variator-driven axle from a Massey 726 combine and an Austin petrol/paraffin engine.

With the cab up against the sorting elevator, I could see exactly what the shares were lifting, as well as turning backwards to help with sorting spuds as you went along.

We ran that for 10 years and then I built a second, this time with the cab up front and a hopper to avoid having to run a trailer alongside all the time.

It even had a topper out front to deal with the haulm, and despite still being a single-row machine, it could run much faster than the old one because it had much bigger webs and conveyors.

What has been your biggest success?

In the late 1980s, things became really tough for small farms like ours.

To survive we had to diversify and, in 1990, we set up a plant nursery propagating mainly flowering plants for the gardening world.

It was a financial lifeline, but was really labour intensive.

One of the most time-consuming jobs was planting the seeds in plug trays – each one had to be singled out and put into compost by hand.

I had seen machines that would automate the process, but they were tens of thousands of pounds – money we didn’t have.

So I set about building my own bench-top seeder.

Using a bank of needles plumbed into a vacuum circuit, individual seeds could be picked up and placed.

Worked with a simple crank handle, it was still a manually-operated machine, but it sped the process up five-fold.

After a while, word got out and I had interest from other growers wanting something similar, so I built a few.

Things started to snowball after this and I had a distributor making sales for me and exhibiting the machines at the NEC.

Through this time, I was tinkering with the design and eventually I came up with a fully-automated machine with a pneumatically operated swinging arm that would pick the seeds up from the hopper and transfer them to the plug trays.

The income from the seeder sales provided us with funds to reinvest in the nursery and, over time, we gradually expanded the business. This extra scale meant we needed other labour-saving devices.

Until then, the trays that the small plants were transplanted into had to be filled with compost by hand, so I developed an auger-fed tray filler that would do the job itself.

It, too, was exhibited at the NEC a number of times and eventually someone decided to copy it – I took that as a compliment.

What’s been the best money-saver?

Forty-odd years ago, we had a number of electrical pylons taken down on the farm and I bought them for scrap value, cut them to size, welded them together as roof trusses and uprights and built a number of buildings out of them.

Are there any jobs you won’t do?

I’ll always try to figure things out myself. It’s only electrics that I get extra help with.

I can generally work my way through how things should be laid out, but if I’m not sure about something, I’ve got a good friend in the village who’s an electrical engineer.

How do you deal with issues that seem impossible?

We are an inventive family by nature and if there’s a problem that needs solving, we’ll all stand back and take a look at it, go away and think about it and come back to share our ideas.

We’re lucky that there are five of us, from two generations, involved in the business and we can all contribute.

What are your essential tools?

There are three key things I couldn’t be without: the MIG welder, the lathe and the guillotine. The welder is an SIP that I’ve had the best part of 20 years.

The beauty of a MIG is that there’s no slag – if you’ve got more than one run to do, you haven’t got to clean it up before you go back over it.

My lathe has got a 2in hollow spindle. I’ve cut a hole in the brickwork of the workshop alongside it so I can machine really long shafts.

That’s really useful with potato and nursery kit such as conveyors and elevators.

If a bearing starts to spin on a shaft, I can build it back up with braising and then work it back down to its proper size – otherwise you’d be looking at new shafts each time, which would become expensive.

My electric guillotine (pictured below) can cut plate up to 3mm thick.

It’s brilliant for making sheet guards for the nursery kit – there’s no distortion or bending – and it’s so much easier on the legs than the old pedal-operated version.

What’s been your biggest machinery bargain?

Even back then it seemed like a good deal.

For the past 35 years, they have cut our 350 acres of cereals almost faultlessly.

They’re brilliantly simple and were an amazing step up from our Massey 515 and 525.

They are both still going strong but we didn’t want to push our luck too much further, so to take the pressure off, this year we bought a 28-year-old Laverda 3790 with a 16ft cutterbar.

It is basically the same design as the 152s, albeit with a much bigger engine and hydrostatic drive.

At £14,500, it seemed expensive compared to the other two but hopefully it’ll be capable of getting over the ground a good bit quicker.

What’s the worst machine you’ve had to deal with?

Our first four-wheel-drive tractor was a Massey 1200.

It was a really good machine when it was running, but having what was essentially a 165 back-end and gearbox with 120hp running through it meant it was always letting us down.

We were constantly having to pull it apart to rebuild the transmission and Multipower unit.

What advice would you give to someone starting out in agricultural engineering?

I think the key is having a good understanding of the challenges that the machinery you’re working on will come up against and always being prepared to challenge why something’s done a particular way.

Just because something was originally made a certain way, what’s to say it couldn’t be improved?

In our yard, there aren’t many machines that haven’t been modified to do the job better.

With more than 60 years modifying kit, you get a nose for what to look for.

Simplicity is key – a good example of that is our current spud harvester.

It’s an Amac and only has a single gearbox – it runs like a sewing machine whereas other makes have lots of different boxes, which ultimately just provide more opportunities for stuff to go wrong.

These self-feed trailers were loaded with the Howick’s trailed forager on the furthest ground and brought back closer to the farmstead for the family’s Freisian Ayrshire herd when grass was short in summer months. 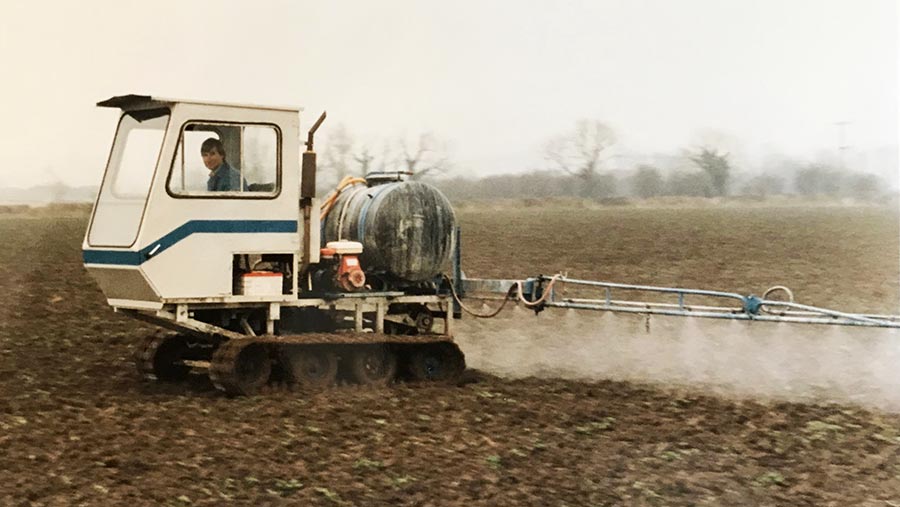 An ex-Army twin-track crawler was adapted to carry a 12m Ransomes sprayer when conditions got really wet.

Initially, it had a petrol engine, but this was later changed for a more torquey four-cyl diesel from a Bedford van.

Keeping the machine going was a home-built bowser capable of filling the tank over the hedge to keep the risk of getting stuck to a minimum. 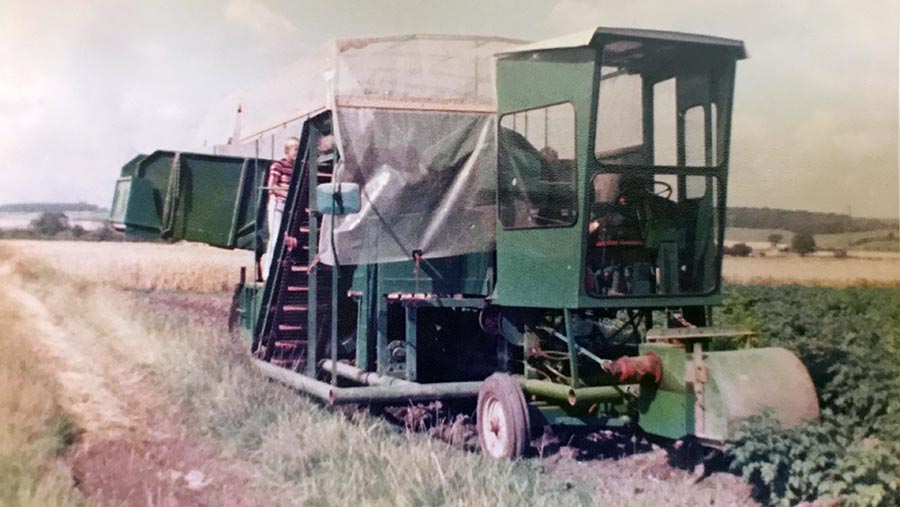 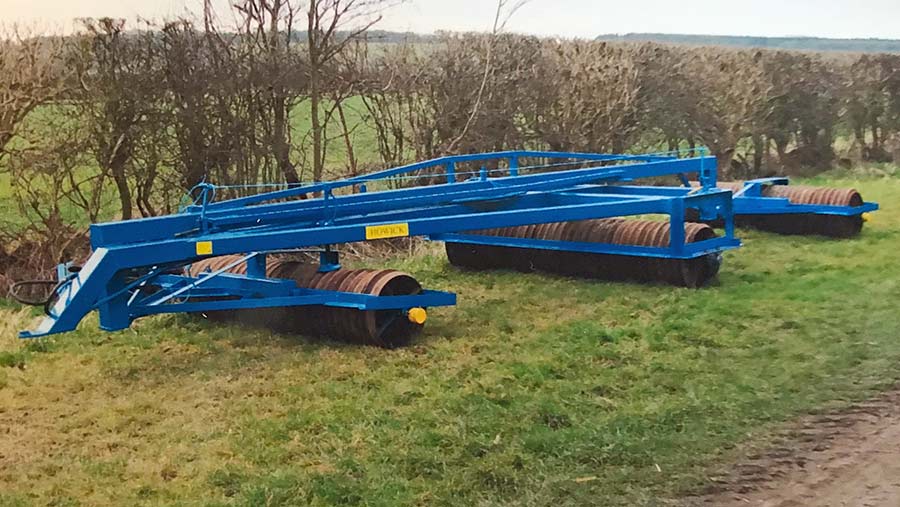 A home-built set of three-gang rolls set up to run in tandem on the road and then swing out hydraulically once in the field.

While the centre section remains stationary, the forward and rear gangs swing out to the left and right to give the rig a 6m working width. 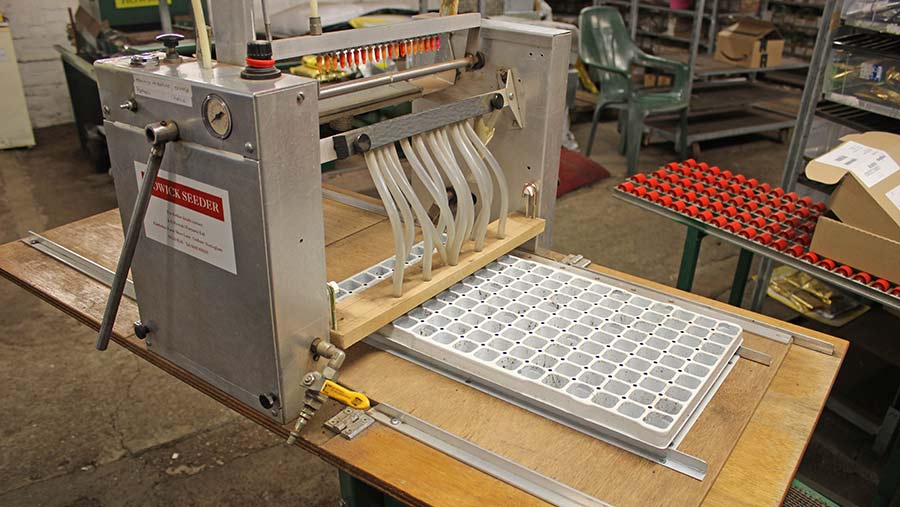 Mr Howick then built his own semi-automated seeder that made the job so much quicker.

A fully automatic version followed, as did a machine that automated the job of filling bedding plant trays with compost.

These became commercial successes and hundreds were sold worldwide. 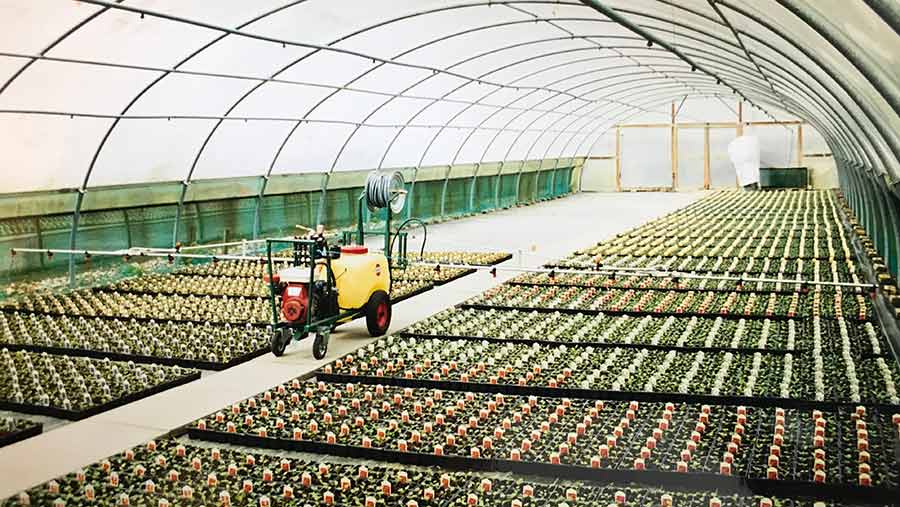 Spraying potted-up bedding plants with a knapsack is a time-consuming, hit-and-miss job.

With folding booms, the working width can be altered from 7.6-9m (25ft-30ft) to suit the size of polytunnel.

It means whole tunnels can be covered in a matter of minutes.