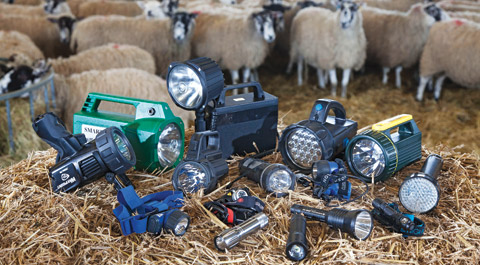 Torch technology has come on in leaps and bounds in the past few years. Emily Padfield and David Cousins gathered 15 torches on a snowy February evening in Warwickshire to see which were best for farm use

It’s a fair bet that most of the torches in use on UK farms came from local agricultural dealers. So, when it came to finding a selection of current models, that’s exactly where we went. But we also added a few newcomers that seemed to offer something a bit different.

The big change in torch technology since Farmers Weekly last did a torch test (way back in 2000) is the arrival of LEDs. These use less power than their bulb-based rivals and are virtually impervious to shock.

Bulbs, however, are far from defunct; in fact some of the most expensive torches we tested make a point of using bulbs rather than LEDs.

We separated the torches into four categories:

With lambing time fast approaching, we decided to use the torches to check sheep, both in the shed and out in the fields. 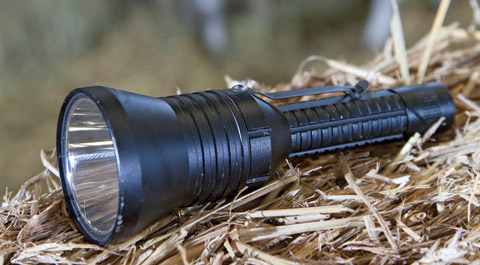 Constructed from anodised aluminium, the LED Super Tac is smooth to hold with a button on the rear for operation.

It’s made to be tough and looks like it could be dropped and trodden on a few times. It’s resistant to moisture and the hardened glass lens is said to be scratch-resistant.

As it’s designed to be a “spotting” light, it uses a parabolic reflector to throw a narrow beam easily to the hedgeline, but it’s not possible to adjust it.

There is enough peripheral light for navigation, though.

And because it’s so powerful at long range, don’t be surprised if it eats batteries. It will last about 3hrs 30mins, but after the first couple of hours you’ll notice the range drops significantly. 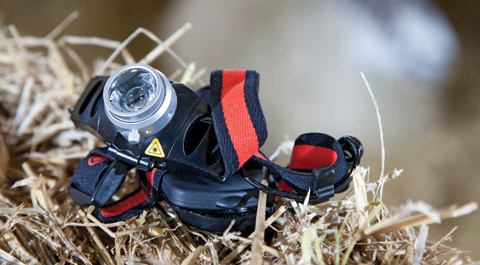 The LED P7 is made from cast aluminium and has a high-quality feel to it. You can slide the lens in and out to get either a tight beam or circular spotlight.

We liked this feature as it enabled us to scan the field and then focus in on a ewe to see it more clearly. This can all be done one-handed. It’s also bright enough to reach to the hedgeline and everywhere in between. The button was a bit awkward to press. 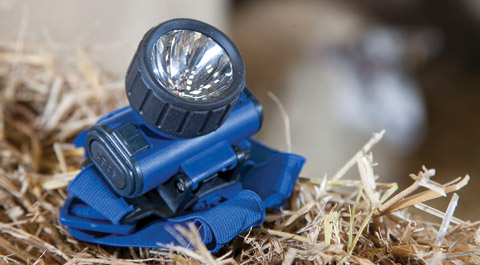 With one single high-intensity LED, this machined aluminium torch lacks the finish of the other two but costs a fraction of the price.

It’s good to hold and small enough to go in a pocket. Brightness is OK, enough to reach the lambing pen but not really enough to see the details of the ewe – for instance, if a lamb’s head was out but not its legs.

The on-off button was too recessed to push repeatedly with the thumb. Brightness-wise, it’s equivalent to the LED Lenser on low, which is enough for navigation rather than specific tasks. 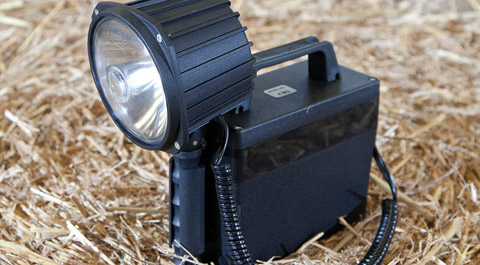 This 3kg twin-bulb-equipped torch was the most powerful on test. There are two settings, one extremely bright and one very wide-angled dimmer setting, ideal for lighting a wide area.

The lamp is detachable from the battery pack, which can be held separately or carried on a strap.

If you were carrying it for a long period you would need the strap.

The handle on the lamp was comfortable and the bulb easily adjustable so that you can angle it exactly where you want. The lamp itself is very lightweight and strong with a protective casing. There are also lots of extras available, including a vehicle magnet and lenses for vermin control. 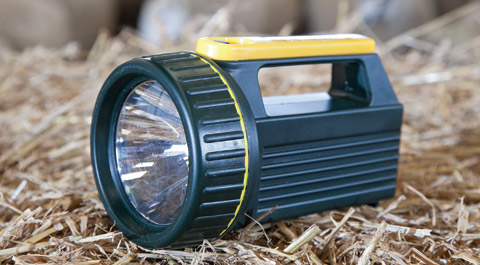 There’s no surprise that this has been the most popular on-farm torch for years. Updated to feature a super-bright krypton bulb, the Classic is a no-nonsense affair with one light setting. This was enough to see the sheep pen clearly, however it didn’t quite make the hedgeline.

The button is in the right place and handle is good and sturdy. Charge does tend to drop off but recharging doesn’t take overly long.

Altogether, the Classic remains a sturdy torch that still has a place on farm. 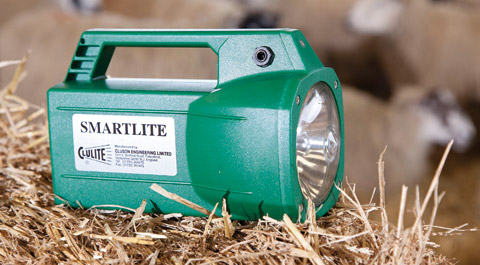 Powered by xenon 20w and 5w bulbs, this almost-rudimentary torch has a very powerful main beam.

It fits in well round the yard and in the field, and looks like it would withstand a fair bit of abuse. It is on the heavy side, though.

It’s a traditional lambing torch, good on the low setting for lambing a sheep. The dual-bulb arrangement gives a high and low setting. 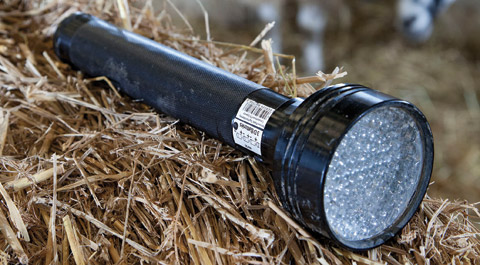 The 95 individual LEDs provide a clear, wide white beam – but only for a short distance. In our test it lit up the sheep, but not enough to see any detail. It’s a bit slippery to hold despite the knurled barrel, but the action of the on/off switch is positive.

It can be found at most dealers and its price makes it a reasonably good buy. However, it’s really no use for anything more demanding than when feeding the dogs. 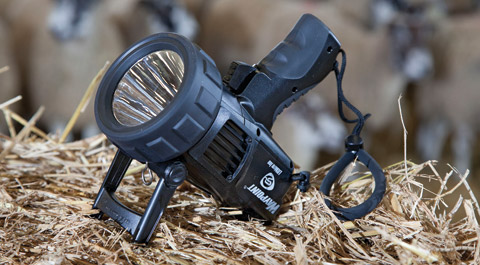 On first impressions, this LED torch looks a lot like a speed gun. Instead of a button, the Waypoint has a trigger, which you can either pull to illuminate or click to stay on. There are two brightness settings.

It was one of the most expensive models we tested, but it is exceptionally well made. The stand is sturdy and stable, and feels as if it should last.

It’s also submersible to 2m for 30mins and it floats.

Despite the weight being largely above the hand, it feels balanced and comfortable to hold.

Low beam gives pretty much the same amount of light as a traditional bulb torch. High beam is very bright. 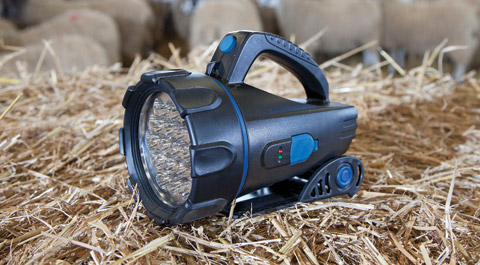 A good all-round LED torch for close-quarters use, such as lighting a wide area when changing a tyre. The LEDs emit very white, diffuse light.

It’s reasonably well made but does feel a little plasticky. And, though bulky, it’s lightweight.

The handle is comfortable and the stand fairly wide and sturdy. However the on/off switch could be a little easier to use. 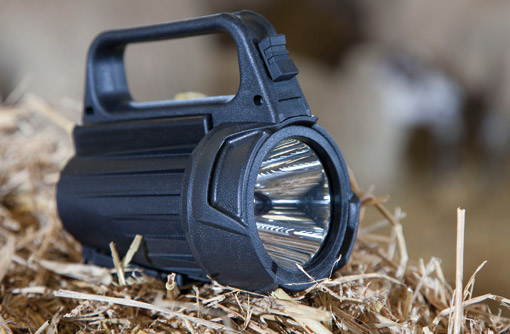 Made of tough-feeling plastic, this LED torch is small enough to go in a coat pocket and bright enough even on dim to look around the yard or complete an emergency plumbing job.

On the high-power setting, it has a bright, pinpoint light that can help identify whether a ewe is lambing or not, even at some distance. 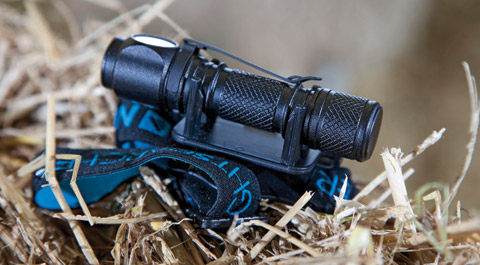 This is a really useful little torch that you can detach to use as a mini flashlight if required and there’s also a handy pen clip for hooking round a pocket.

It was easily bright enough to reach to the pen, and the swivel function was robust and easily adjustable, enough to securely position the beam for the lambing test. It’s light and comfortable on your head, and great for illuminating a reasonably wide area while still stretching far enough to see details clearly.

Unlike the Night Searcher, this torch stores its three AAA batteries in a neat box at the back of your head. It has a camera-type lens adjustment on the front with a natty sliding knob, and you can adjust the power setting with a lever on the battery pack to save battery life.

Again, it swivels through 90deg and is very well made, but the on/off setting is a little fiddly for larger fingers. Altogether it’s a very bright, high-spec headtorch, though perhaps aimed more at climbers than farmers. Nevertheless, we found it great both for lighting large areas and seeing a fair distance away.

The cheapest on test, it was no surprise that this traditional bulb torch was easily outclassed by the other LED-powered units.

Two AA batteries power the torch and these are kept behind the flashlight itself. However, it is comfortable to wear and probably is enough to navigate round the house should there be a powercut and a bonus is that it’s water resistant. 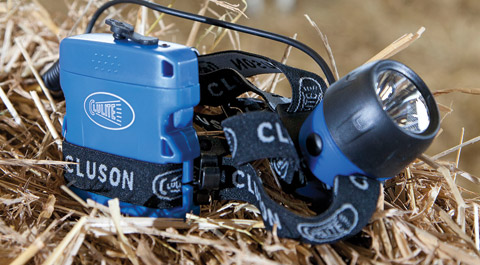 This was the only rechargeable headlight on test, and despite being fairly bulky, it was reasonably comfortable to wear.

The three beam settings have no adjustment for width, but it was more than powerful enough to reach our pen and even on low would be enough to lamb a ewe on the ground.

Again, there is 90deg adjustment and overall, we were impressed with performance, especially as it had the added bonus of being rechargeable.

Short of cash? Try this 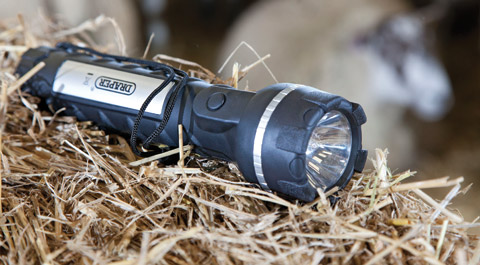 Bog-standard torch. Takes three D batteries, which aren’t cheap. The light it emitted was enough only to navigate round the shed, and not really sufficient to identify whether a ewe even 10m away was lambing.

It’s impact- and water-resistant, though all those batteries do make it heavy.