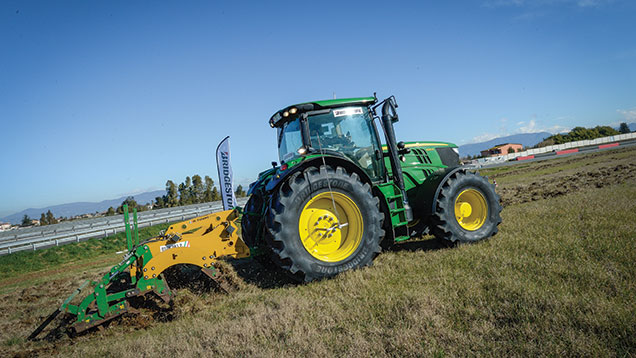 Tyre technology continues to advance in leaps and bounds in order to keep pace with the demands of heavier and more powerful tractors, takes a look at two newcomers and a future concept.

On the face of it, the ledge built into each lug of Trelleborg’s latest traction tyre design looks pretty innocuous – a device simply to make the tyre appear different to others, perhaps.

But in reality, the structural changes behind this seemingly modest modification have improved traction to an extent that surprised even Trelleborg engineers.

“Traction is a function of torque, provided by the engine, and weight,” says Piero Mancinelli, R&D director for Trelleborg agricultural tyres.

“To cope with increased power, progressive increases in overall diameter and section width have been used. But if we are able to improve torque delivery transmission, we can also improve traction from tyres of existing dimensions.”

That is what Trelleborg’s Progressive Traction technology is designed to achieve. It modifies the lug contact face and the way the lug deforms under vertical (weight) and horizontal (torque) loads.

At first glance, the lugs are of a size and shape familiar from other Trelleborg.

The key new design feature, though, is the “double lug”, which is reinforced at its base to increase resistance to bending back under torque load.

The reinforcing block also creates a larger lug surface area because it is formed with a sharp edge and flat top rather than blending smoothly into the main structure.

Early comparative tests showed more than 10% extra traction versus control tyres and with further testing now under the R&D team’s belt, Trelleborg claims as much as 18% improved traction over the industry average

The ability to mount VF-rated traction tyres standard rims in place of a less-capable tyre is a feature of the new VT-Tractor design that marks Bridgestone Corporation’s entry into the European market under its own name.

The Firestone name continues on tyres catering for about 95% of market requirements and Bridgestone will be reserved for the premium sector to emphasise the top-end specification of its best-performing tyres.

The VT-Tractor is an all-new design developed in Bridgestone’s European R&D facilities to cater for operators wanting maximum performance from tractors of about 150hp and upwards.

“A ‘VF’ rated tyre has a very strong but flexible carcass that can carry the same load at lower inflation pressures than a tyre of lower specification.”
Lothar Schmitt, Bridgestone Corporation

It is being produced in several 28in and 42in rim sizes at present and others will be added for 30in, 34in and 38in rims in future.

They will include 50-, 60-, 65- and 70-section low-profile configurations and all meet the European tyre organisation’s “VF” design and performance standard for tyres with a defined high degree of sidewall flexibility, strength and load carrying capacity.

“A ‘VF’ rated tyre has a very strong but flexible carcass that can carry the same load at lower inflation pressures than a tyre of lower specification,” explains Lothar Schmitt, director of agricultural and off-highway tyres.

“It is also defined as a tyre capable of carrying 40% more load than a reference tyre at the same pressure.”

Road speed also comes into the equation; because a VF-rated tyre is built to carry the same load at 65kph as at lower speeds, there is no compromise between the weight carried and journey times.

Equally, this aspect of the tyre’s performance can be exploited to eliminate the inflation pressure compromise usually imposed by the difference in pressures needed to sustain high speeds on the road and ensure minimum impact on the soil. A VF tyre can be run at fast road speeds with pressures on 1 bar or less, which is the ultimate for low ground pressure field work.

Of all the recent advances in traction tyre design, the PneuTrac is surely the most intriguing.

In place of a conventional carcass structure with outer sidewalls, the tyre has a folded sidewall – described as being like the folds of an accordion – that allows the tread to change its shape freely and move about the wheel centre in all directions.

As air pressure inside the tyre is reduced, the sidewall folds in rather than collapses as the wheel rotates and generates less heat, which is the major problem with conventional tyres being run at high speed with low inflation pressures.

These characteristics give the new design the best performance features of tyres and rubber tracks.

Having been conceived by Israeli engineering firm Galileo Mobility, the PneuTrac is now being developed and tested by the Czech tyre manufacturer Mitas in anticipation of commercial production.

Three prototype sizes have already been produced – the 18in fitment has been used by Galileo and Mitas for initial testing and now there are 28in and 38in prototypes being put through their paces, which indicates the partners’ confidence in the suitability of the concept for use on full-size agricultural tractors.

PneuTrac has great potential and by mounting it on a tractor exhibited at the Sima show we are unfolding the future of this concept,” says Andrew Mabin, Mitas marketing and sales director.

As a result of its ability to run at zero pressure, the PneuTrac has demonstrated some remarkable performance advances over conventional tyres of equivalent size, including a 53% increase in footprint thanks to the “track effect” of the tread spreading longitudinally.

Yet a 48% improvement in tractive force has been recorded in the controlled environment of a tyre-testing soil pit and, perhaps most surprising of all, the novel design is reckoned to have good lateral stability at low inflation pressure, which is essential for acceptable handling.