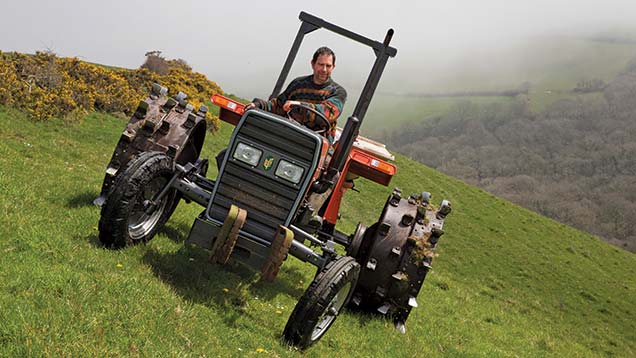 Cornish farmer Robert Hooper has returned to an old-school system to make spraying and spreading duties a little less sketchy on his steep-hilled dairy, beef and sheep unit.

The farm’s new Indian-made Tafe tractor has been kitted out with a set of steel spade lug wheels to cope with the Everest-like slopes across the 300ha of grazing pastures at Crackington Haven near Bude. It means he can keep the grass on his steepest ground productive for grazing sheep and cattle.

The 47hp tractor has two sets of steel wheels either side, which have been welded together to provide the extra grip. They are spaced at the widest track setting to stop the tractor toppling over, and Mr Hopper has also fiddled with the tractor’s spec to make it better suited to the savage 50deg slopes.

The standard set-up, which usually involves oil in an axle with wet brakes, would drain to the lower side, leaving the upper brakes without any lubrication.

That would be useless for Mr Hooper, who constantly uses them to stop the front end from nose-diving down the hill. So, his version was specially built with dry drum brakes on the end of the rear axle.