Fed up with clammy herbage seed clogging in his combine tank, Herefordshire farmer Oliver Williams set about building a secondary auger to help wind the stuff out.

Before the mod, Mr Williams, his father Philip and combine driver Keith Jones used to battle every time they needed to empty the tank of their New Holland CX5090.

Even with the main auger flow plates removed, the seed – often between 20% and 30% moisture – wouldn’t come out the tank without assistance. 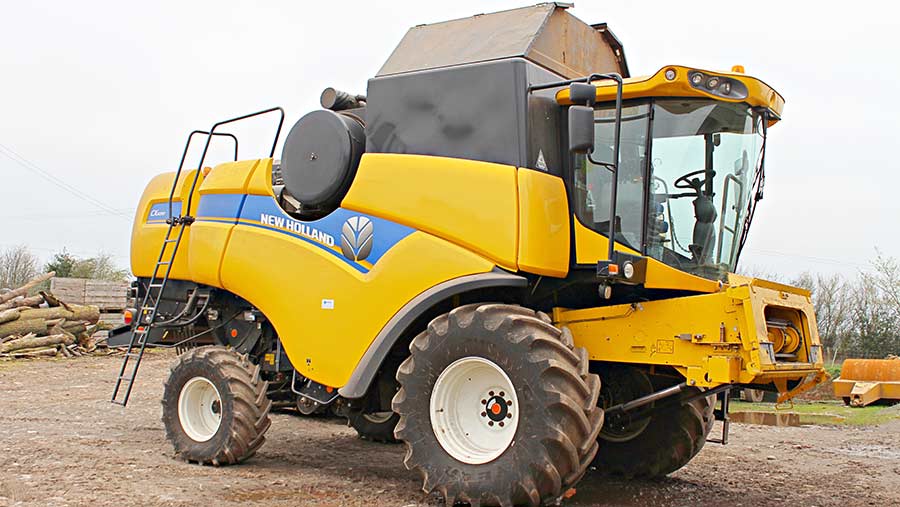 The only solution at the time was to stand on the top of the combine and poke a stick into the tank as it was unloading.

This was obviously unsafe and, if they weren’t careful, they could get the stick stuck in the auger and end up having to fish bits of chewed up wood out of the trailer.

After doing a bit of research, Mr Williams found several growers were getting around the problem by fitting a vibrating unit in the tank to work the seed loose during emptying.

But he felt the violent way in which these shake the tank wouldn’t do the combine any favours in the long term.

That’s when he hit on the idea of fitting a secondary auger in the tank to help dislodge the seed.

The fact he had a spare section of auger from a GSI grain bin and a 90deg gearbox also meant he didn’t have to go shopping for lots of extra parts.

Mr Williams’ first task was deciding where to mount the auger.

As the rear portion of the tank was the most troublesome to dislodge, he settled on fixing the extra agitator behind the main one.

At the same time, he also wanted to bolt it as close to the main auger as possible to avoid getting any clogging between the two.

Eventually, he found a decent spot clear of obstacles inside and outside of the tank for the mounting bolts.

He cut the auger down to the width of the combine tank and then borrowed a friend’s lathe to mill a couple of inserts – one to fit the shaft into the gearbox and another to fit the opposite end of the shaft into a bearing and carrier.

To power the shaft, he salvaged a 32cc hydraulic motor off an old Kidd Feeder wagon and connected it to the top of the gearbox.

Initially, he was unsure this would be up to the job, but it proved to be more than adequate with the reduction gearbox.

With the auger, gearbox and hydraulic motor in place, Mr Williams set about hooking up the hydraulic supply.

Thankfully, this was fairly straightforward with the

Williams family’s combining setup as they use a Shelbourne Reylonds stripper header, which doesn’t use all the hydraulic circuits.

He opted to tap into the reel in and out loop and fitted two diverter valves so that it could quickly be converted back when running the original header.

Using this existing circuit means the auger can be spun backwards and forwards as the tank empties simply by pressing the reel in and out buttons on the joystick. 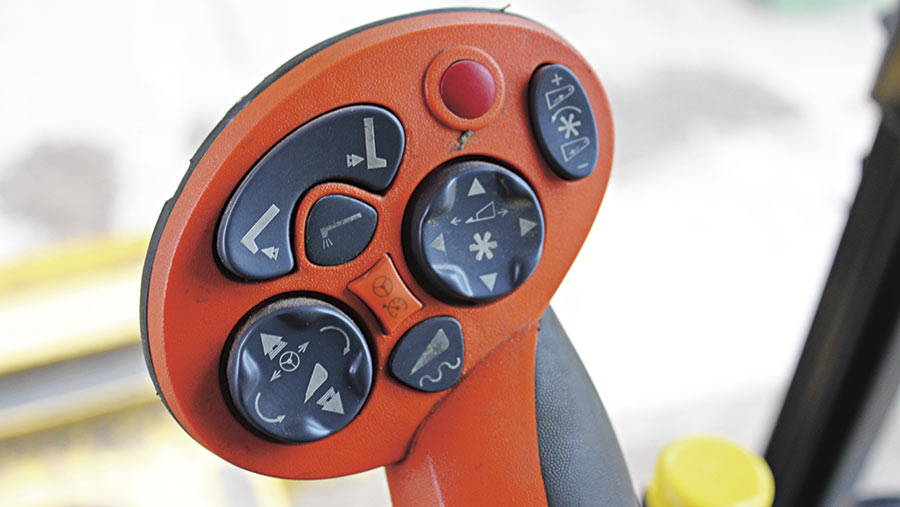 To make sure the auger wasn’t overloading the circuit, Mr Williams also installed a pressure relief valve and with gauges to check it didn’t go beyond New Holland’s maximum pressure rating in either direction of rotation.

With the system fully set up and working they put it to work in a crop of herbage seed, coming off at about 20-25% moisture.

The auger did the trick and emptied the entire rear half of the tank without any additional encouragement.

However, the front half of the tank still remained clogged with seed.

To get round the problem, Mr Williams plans to mount a similar auger in the front section of the tank.

Initially, he will hook this up to the same hydraulic circuit as the rear auger so the two can be operated on the same joystick button.

If the split oil flow is insufficient, or if he needs to get better seed movement control within the tank, he might hook the second auger up to the reel raise and lower circuit.

Almost all parts for the original auger were scavenged from machines already in Mr William’s yard, but he did have to purchase a few hydraulic fittings, hoses and a pressure relief valve that added up to about £230. 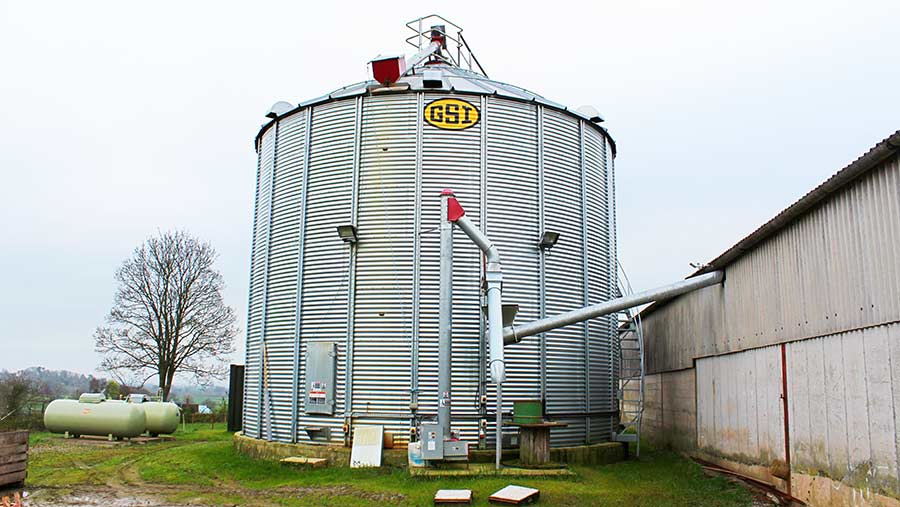 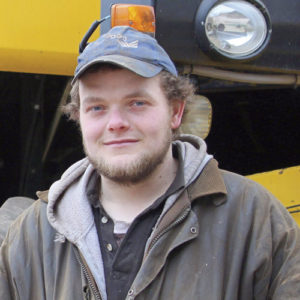 The Williams family has been growing herbage seed for Germinal at Newton Court for the past 10 years and generally has about 50ha in the ground each year.

Average yields are about half a tonne per acre, but the value of the seed helps make up for the low yield and additional workload. Once established, the herbage seed ley is generally kept for two years.

It is possible to run it to a third season, but by then the seed yield will have slipped by up to 10%.

Until 2012, the Williams family used a John Deere 2256 five-walker combine and conventional header to cut the seed, but the large volume of wet material going through the innards was so harsh it caused them to stretch the combine and forced the concave to drop off its mounts.

After that they decided to invest in a 2013 New Holland CX5090, but this still struggled in certain conditions.

That’s when they decided to invest in an 18ft Shelbourne Reynolds stripper header.

This puts far less strain on the combine and allows them to harvest wetter seed if they need to.

In an average day they can cut about 10ha with the stripper header compared with 4ha to 5ha if they were using a conventional header.

Usually, when the seed is ready to cut it will be between 20 and 30% moisture, but they say anything more than 25% is a challenge, even with the stripper header.

Once off the field, the seed is then dried to less than 14% moisture in either a USA-built GSI bin or a conventional drying floor.

But getting the grass seed down to this moisture is equally challenging as it heats up incredibly quickly and is difficult to move around in the bin.

To make the process a little slicker Mr Williams is also planning a series of modifications to his GSI bin.

These include removing the unloading sweep auger and fitting extended stirrers of a larger diameter so they reach the bin floor and give more agitation and air movement through the seed, as well as fitting an adjustable distribution head in the top to make sure the seed is spread evenly.

We’re gearing up for another year of the Farmers Weekly Farm Inventions Competition – a firm favourite of ours on the FW Machinery desk.

If you’ve been busy building something a bit different in the farm workshop you can get your entry in early my emailing fwmachinery@rbi.co.uk.

Just send us a few details about your creation such as why you decided to build it and how you put it together as well as a high-quality picture or two.

Remember there are three categories: simple, intermediate and complex, so whatever the scale of your project, there’s a chance you could win.