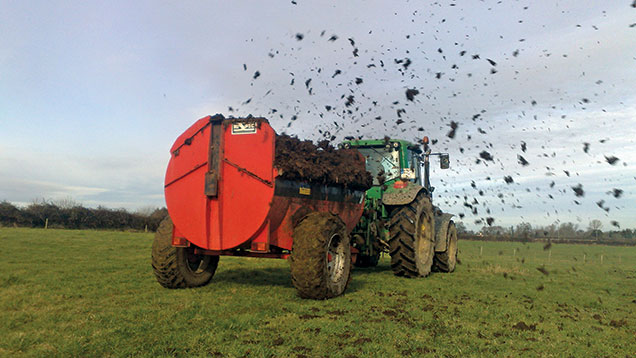 Some operators swear by them and others swear at them. But the flail or barrel muckspreader has endured in the face of other designs for a remarkably long time.

First brought out by Howard as the Rotaspreader – a name that has become the generic term for this type of machine – the flail spreader has low purchase and running costs on its side thanks to the simplicity of its construction and the way it works.

Low loading height and the ability to handle sloppy material as well as fresh, strawy and well-rotted manure are also in its favour.

On the other side of the coin, daily output is limited by the relatively small capacity compared with other types of spreader.

Also, the high start-up torque demand and variation in discharge rate during the spreading process can be a drawback.

To some extent these problems can be eased by filling the ends a little lighter to minimise the torque load and to get the flails working, and by varying forward speed to get an even application.

While most flail-spreader manufacturers have followed the format established by the original Rotaspreader, several variations have come and gone over the years.

The large capacity KB Big-Muck aimed at contractors has a fold-out barrel giving increased capacity without imposing any extra load on the flail rotor, while the Hillam has a rotating barrel.

Although the Hillam machine discharges a load in the same way as any other flail spreader, being able to tilt the barrel to left or right means it can be loaded from both sides, and extra load capacity is available when the barrel is upright, especially for gloopy material.

At the other extreme of these high-capacity spreaders, the Minimuck from Fleming Agri-Products is a tractor-mounted design intended mainly for getting access into stables and other small buildings.

Farmers who want to keep their beloved flail spreaders going have any number of spares outlets, with Suffolk’s Hunton Legg in particular having acquired existing stock and production rights to some well-known makes.

Also relatively recently acquired is the Marston Group range of products, which includes flail spreaders produced with Griffiths, Salop and AS Marston names on their flanks.

A comprehensive rebuild is another option for tired spreaders that still have serviceable components.

This involves fabricating a new barrel, dropping it on to the original chassis, replacing all wearing parts and reusing any bearings, drive components and running gear that are still serviceable.

A rebuilt 4.6cu m spreader will typically leave his yard for about £1,500, with an anti-corrosion galvanised finish adding £500-£600 to the bill. He also builds spreaders to order, using some salvaged parts but aiming to use hard-wearing components for long service.

Replacing a machine that has gone beyond repair otherwise involves scouring classified ads and dealer yards for a used spreader in decent condition, or buying new.

Although K-Two has decided to stop making its Fraser Muck-Master range, numerous engineering firms in Ireland continue to cater for the new flail spreader market, as does Marshall Trailers in Aberdeenshire.

Despite producing the MS range for more than 30 years, Marshall’s five-model line-up is still being enhanced with detail tweaks and improvements.

This year, for example, the spreaders are built with added pressings to increase strength of the construction with its integral chassis. Meanwhile bolt-on axles permit dealers to fit all wheel options to all models. Also, the slurry bib option can now be added by a dealer and the rear barrel drain is helped by the addition of a front drain outlet.

With such a simple design, flail spreaders from all the manufacturers are similar in overall concept. The differences tend to be in the thickness of steel used for the barrel and end plates, the surface preparation and paint used, the size of rotor bearings and the dimensions of axles and tyre fitments.

Other features that have an impact on lifetime operating costs include the drive chain and sprocket dimensions, flail-chain steel quality and dimensions and the method of securing the chains to the rotor tube and the end plate to the chain.

As far as day-to-day operation are concerned, the size of the loading aperture – determined largely by how far the lid opens – and the effectiveness of the swinging end flails to get the spreading action underway, will have an impact on the usability of these spreaders out in the field.