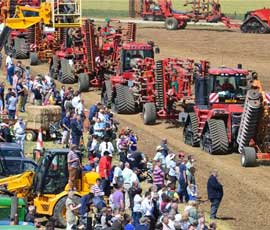 A Lincolnshire farm was the venue for a new world record on Saturday (28 July), as 50 Case IH Quadtracs went to work in the same place at the same time.

The event at Hemswell Cliff, involving more than one-third of all the UK’s working Quadtracs, saw the giant machines work together continuously for seven minutes and 47 seconds, securing a place in the history books.

This successfully surpassed the “30 machines cultivating in one field for five minutes” which was the minimum needed for recognition by Guinness World Records.

It was organised by Helen Rainthorpe to raise money for Cancer Research and in memory of her father, John Rainthorpe, who died of bile duct cancer in 2010.

“It was the culmination of nearly a year of planning – I’m so pleased and relieved it all went well,” she said. “The turnout was overwhelming. I’m completely over the moon.”

The Quadtrac driver who travelled the furthest to take part was Lee Chapman, who works on Knockothie Farm near Ellon in Aberdeenshire – a journey of 433 miles that took over nine hours.


“To see 50 of these in a row is phenomenal,” he said. “It was the chance of a lifetime to be involved in this.”

Coming from more locally – just three-and-a-half miles away – was Tim Elwess. “It’s brilliant that everyone’s taken the time to come to help set a record and raise some money. There were lots of spectators, which also shows the level of public interest,” he said.

“I see many unusual records – from the tallest man to the oldest person to swim the channel – but this was the first tractor-related one I’ve been involved in,” she said.

Realising that everyone involved had successfully achieved their goal, Ms Rainthorpe added: “Myself and my brothers still get a copy of the Guinness World Record book for Christmas – a tradition that our parents started when we were young and that has continued. It’s nice – and a little surreal – to think that we’ll be in it, along with all those other records.”

The event has already raised more than £20,000 for Cancer Research UK’s Relay For Life – a figure that’s still rising.