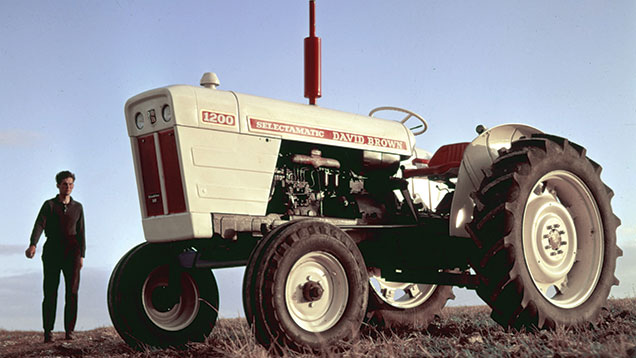 The early 1970s was a complicated time to buy a new tractor. In the years up until that date, manufacturers either didn’t fit a cab at all or, if they did, it was a lightweight affair designed to keep the rain and wind out.

It certainly wasn’t made to protect you if the tractor rolled.

See also: What tractors did farmers buy in 1994?

But increasing concern about farm fatalities prompted the government to act.

On top of that, all new safety cabs had to have a noise level that was below 90dB.

So what would your hard-earned money buy 44 years ago? Here’s a snapshot.

David Brown was one of many companies making tractors in the UK in 1971, with a big plant at Meltham near Huddersfield.

The latter had an advanced hydraulic system and on-the-go engagement of four-wheel drive, something of a novelty in this era.

A foot throttle was fitted, and the safety cab had vinyl cladding. If you paid another £6.40, you could even have rigid cladding.

Italian-made Same tractors were a popular make in the UK in this era and were brought in by Cornish and Lloyds in Bury St Edmunds, Suffolk.

A cheque for £2,125 secured you a Same Centauro with a 55hp air-cooled engine, four-wheel drive, a diff-lock, safety cab and a set of weights.

County Commercial Cars, in Fleet, Hampshire, was a popular choice for people who wanted that bit of extra pulling power that the regular makers couldn’t supply.

All were based on Ford engines and transmissions and the range went from 62hp.

Top of the range was the 102hp forward-control 1004 model with equal-sized wheels and a front-mounted cab for £4,425.

However it had a fair range of products that went from a 47hp Deere 1020 to a muscular 143hp 5020. Power steering on this model was standard and the driver could choose from eight forward and three reverse gears.

A 1,000rpm pto was fitted and Cat II and Cat III linkages were available. Cabs for the two biggest models were due to be announced and the cost of a 4020 tractor started at £3,400.

The Doe 5100 was something of a powerhouse, with a 100hp six-cylinder engine, eight-speed transmission and power steering.

One of the more exotic items on the 1971 tractor list was the Hungarian-made Dutra.

The name came from a mix of the words Dumper and Tractor and the long nose and equal-sized wheels made it look pretty impressive.

Dutra Tractors at Brandon in Suffolk brought them in, but the company stopped making them in 1975.

All models were made in the new Basildon factory in Essex, down the road from the Ford car plant at Dagenham.

However it didn’t have a four-wheel drive model, leaving a handy gap for companies such as Doe, County and Roadless to provide often higher horsepower models for big farmers and contractors.

International Harvester was a big manufacturer across the world but UK models on offer were relatively low-powered ones.

Austrian make Steyr was selling its tractors into the UK under the Kingsbury Plant name and was based at the IH factory.

Leyland had taken over from Nuffield several years before and was selling three models that were made in Bathgate, West Lothian. Top model was the Leyland 384 deluxe with 70hp, 10 forward and two-reverse gears for £1,738.

However the biggest model it offered was the MF1080 with 12-speed transmission with a price-tag of £3,091.

Polish maker Ursus, which was brought in by Maulden Engineering in Bedfordshire, offered an 85hp engine on its top-of-the-range model and eight forward and four reverse gears. Price was a reasonable-sounding £1,950.

Muir Hill, based in Gloucester, was another company that offered specialised high-power tractors based on Ford and Perkins engines.

Roadless Traction was based at Hounslow, Middlesex, and made effective use of four-wheel drive. You could buy a 75hp Ploughmaster 75, a 95hp Ploughmaster 95 or the top-of-the-range Ploughmaster 115 a 115hp engine. Price was on application.

Belarus, in those days part of the Soviet Union, offered the MTZ-52, a 70hp tractor with power steering, independent front suspension and safety cab for just £1,349.

Universal Tractors, made in Romania, had been sold in the UK for many years.

The company’s offering in 1971 was the U445 with four-wheel drive, 50hp and a nine-forward, three- reverse gearbox. Price tag was a very reasonable-looking £1,170.