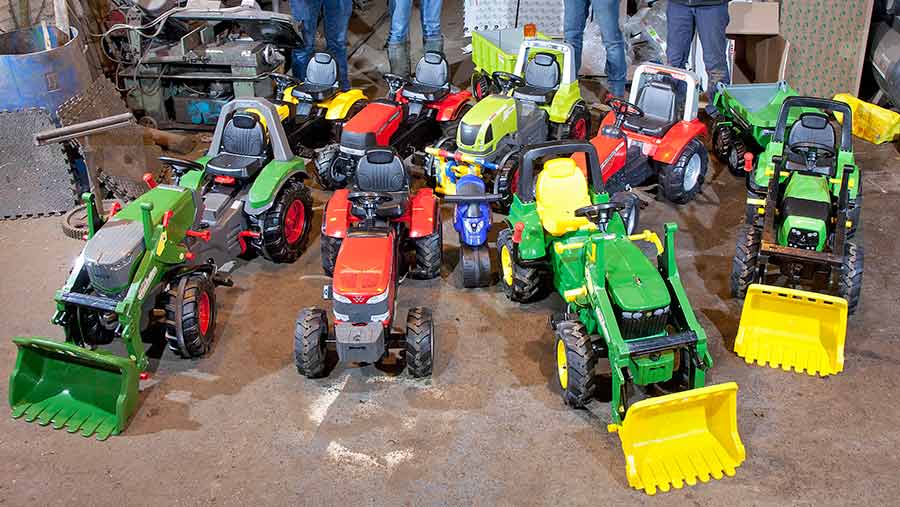 Ah Christmas! That jolly time of the year when farmers’ pre-teen kids dream of ride-on tractors and Farmers Weekly journalists think up cheery ideas to bring a smile to readers. And this year we have come up with something a bit different – a pedal tractor test.

The first stage in this epic exercise was to phone up the tractor makers to see if they would send us one of their ride-on tractors. They were certainly keen and a few days later eight huge cardboard boxes arrived in the Farmers Weekly office.

Then, on a freezing early December day in a farm workshop in Hampshire, a team of crack machinery writers consisting of Oli Mark, Edd Mowbray, Nick Fone, James Andrews and David Cousins ripped open the boxes to see what was inside.

Let’s make one thing clear. These are purely pedal-powered (via a chain) and not be confused with the frankly much-less-fun battery-powered items you see some kids riding around on.

Cost is anywhere from about £130 for a slightly smaller tractor with no loader to about £280 for a bigger tractor with a hand-operated loader. Though we were sent a relatively simple offering from New Holland, they do sell a full-size pedal tractor, too.

Putting the tractors together revealed some surprises. For a start, more than half of the tractors had proper inflated rubber wheels with decent lugs, rather than the usual cheapie plastic-moulded ones.

That alone did make the tractors seem more like a grown-up tool rather than the basic versions we remember as kids. Although the downside is that some of the tractors were heavier than you might expect. There’s an extra cost of about £40 per tractor, too.

It takes an adult about 20 minutes to put the machine together using a cordless screwdriver. In almost all cases you have to put the transfers on yourself – a job that requires an adult with a steady hand or an older (and preferably well-behaved) child. 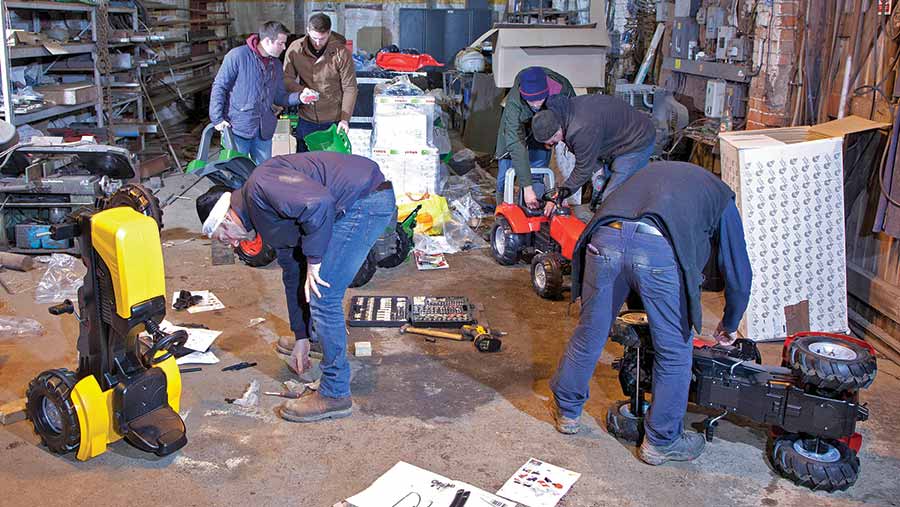 Pretty much all of the tractors came with front loaders, while they all have pull-up bonnets, too, though there’s not much detailing in the engine bay to get excited about. Incidentally, the Claas Arion was a stand-out machine as it had a flashing beacon – good to get them health and safety conscious early on…

Most of the tractors had front and rear pins to allow kit to be pushed (tricky) and pulled. The front loaders that were fitted on the tractors were moderately sturdy and fairly easy to drop on and off.

Other goodies that were sent to us included a winch with a hook and tow rope. Most impressive of all was a trailer and hookloader system for those kids who are already planning to take over from dad the moment they reach 16.

In case you were thinking that the FW machinery team were keeping the tractors as a low-emission means to get around the office, we should mention that the tractors were donated to charity.

One was The Children’s Trust in Tadworth, Surrey, which offers residential and community-based rehabilitation services to children and young people with a brain injury.

The others were St Michael’s Hospice in Basingstoke; Baby Bank Network, which supports less privileged families in Bristol; the women’s refuge in Alton, Hampshire; and Spurgeons in Winchester.

We would like to thank all of the tractor manufacturers for providing the following: