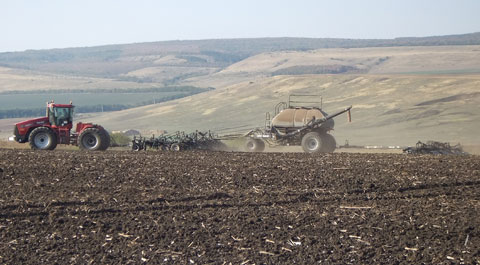 
I am the senior farm manager for Andropovsk Agri Project. It’s a farm half-way between Min-Vody and Stavropol in the south of Russia.

Wheat accounts for the biggest area of crop grown. We can’t grow oilseed rape – the winters are too cold for it.

Our biggest workload is in the spring, with 50% of the farm having to be planted and the rest sprayed or fertilised. Average annual rainfall is 450mm (18in) and we farm at about 530m above sea level.

The rough grassland will one day be the home to a beef unit, but at the moment it’s just rented out to local farmers.

The land is leased, so we have around 1,500 landlords (which can get entertaining at times.) For rent we pay on average 1.5t of wheat for each share, but it can also be paid in barley, maize, hay or straw!

The shareholder takes the grain to feed their own livestock. Most people still have a house cow or pig for them to eat.

I look after the day-to-day management of the farm and do all the reporting back to head office in London. I also buy all the farm inputs, from machinery to chemicals.

I have been known to sit on a tractor, too, as part of putting together a spray programme. Most chemicals are about ten years behind UK, but are freely available.

However fertiliser is sometimes very hard to find. I’m not sure why, since we have a fertiliser factory 40km away. But we are told it can only go for export.

The biggest problem for us is the distances between farms – I manage to drive 350km (220 miles) most days. Finding labour and keeping it is also a headache. Drunk drivers are a common problem and some staff are very light-fingered. Eyes in the back of your head are needed at all times…

The weather can also be interesting! Last year it was -25C for nearly three months. This year it was -15C for about a month and there was hardly any snow.

During planting last September, October and November we had only 4mm of rain. Meanwhile summers can bring 40C temperatures and that brings the danger of fires.

The soil here is mostly a heavy, deep black clay, with some salt marshes. Most of the ground has compaction problems, so subsoiling is a must.

Most of the tractors and sprayers work round the clock for six months of the year. Each machine has three drivers, who each do 12 hours on and 24 hours off.

The machines all have GPS fitted and if a machine stops for more than half an hour, I get a text message. I then have to find out what the problem is.

We are trying for a one-pass cultivation system using a 10m Simba Great Plains cultivator with pro-lift legs and 18m Flexicoil drill.

The Great Plains’ transport width is 4.5m wide, which is needed because we have a problem with height and width restrictions on two farms. The Flexicoil is 8m wide, 5m high and 32m long when folded, so you only have one shot at getting into places.

On an average day we can plant 300ha in any 24-hour period – that’s a lot of seed and fert going down the spout! In one 24-hour period we will have two tractor drivers for each machine, two Manitou drivers and two truck drivers who work 24 hours straight and then have 24 hours off.

On top of that we have two people who dress the seed, a weighbridge operator, plus service guys and me. That makes 12 people who are employed to plant 300ha – on a good day…

Thanks to a hard winters, most seed-rates are on the high side. Most people plant 200+kg/ha just to overcome the winter kill. Most European wheat would not come through the winter.

We use contractors to harvest the crops. At one stage last year we had 23 New Holland CR9080 combines and 40 trucks moving the crops to the grain store.

We have two grainstores and the average distance from field to store is 45km (28 miles). At the store we have a fully equipped laboratory that tells us the grade of wheat from each field within 30 minutes of the first truck arriving.

The stores each hold about 4,000t, so the crop are sold very fast sometimes. Each store has its own weighbridge and some days you can see several hundred truck movements.

The Kazas trucks carry between 10 and 12t from the field to the store, but the trucks that take the crop away after it’s been sold hold 50-60t on a six axle tractor unit. No weight limits here – cash is king.

The three big tractors clock up 2,500 hours a year and will be replaced every three years. That applies to the rest of the machinery replacement policy, too. All servicing of the tractors are done in house and we have a Russian-trained workshop manager! If all else fails, I get on the phone to the UK (which will cost me a few drinks on my return to the UK…)

Apart from our own farmwork, we also do outside contracting of 4,000ha discing and fertiliser spreading, plus spraying and Manitou hire.

We also do a lot of aerial cropspraying with a helicopter. Water rates are from 25-50-litres/ha and the price is about £3.50/ha. At that price you can’t afford to buy too many wheeled sprayers. The output from the helicopter is about 1,000ha/day!

The Matrot’s water rate is 100-litres/ha, so when working 24 hours a day it can cover 1,000ha a day! None of our fields have any obstructions – most are nearly square and were laid out in the 1980s with shelter belts around the outside.

A Kazas truck runs water to the sprayers, thus stopping any problems with spillage of chemicals when filling near watercourses. Water is a problem and most of the spraying water comes from fishing lakes, so we have to be very careful.

Most of the fertiliser is applied in the snow or on frosty ground. The land is very flat so there’s no problem with run-off! This is the only time you can travel; once the snow melts the fields are untravellable for weeks later!

By the time they will travel it really is too late to apply nitrogen, or else it’s too dry to do any good!

The biggest weed problem is Ambrosia – it’s our equivalent of blackgrass. In the middle of June the wheats look nice and clean, but once flagleaves start dying back and the sun hits the ground, it gets going.

Within three weeks it has taken over your wheat crop. Then the only way you can harvest it is by Roundup. The joys of farming in Russia…