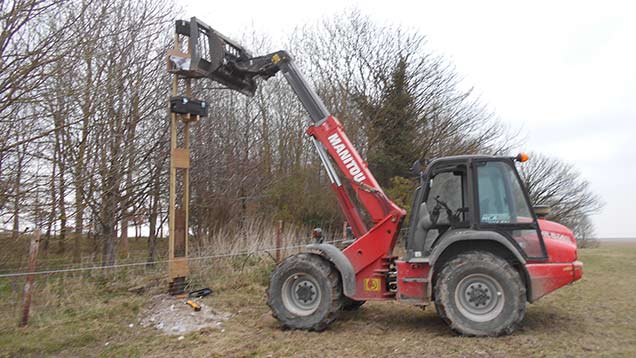 A tech-savvy Wiltshire farmer believes that many rural dwellers could get much faster broadband than they currently receive from the likes of BT by making use of 4G hot spots.

Fed up with slow connections, Richard Guy tried a satellite system but found it was little better than BT.

However he noticed that the 4G signal from the nearest mast was surprisingly powerful.

The problem was that the area of strong reception was a long way away from the house.

Have you come up with a natty way of getting decent broadband in an area where it is usually poor? Let us know – you could make other farmers very happy. Email david.cousins@rbi.co.uk

He did some research and, with a simple 4G dongle, found the point of strongest reception.

Then it was a matter of confirming from Ofcom’s mobile network mast website where the best signals are likely to be found.

He then used the farm’s telehandler to put up a discreet mast on his land and fitted the dongle inside a waterproof toolbox three-quarters of the way up.

It is powered by a 12V battery plus small solar panel to keep the battery topped up, so no mains power is needed.

The signal is converted into a form that allows it to run along a relatively cheap (£1/m) fibre-optic wire to his house.

For him, it has worked a treat, with broadband speeds jumping from a typical weedy 1Mbps to between 45Mbps and 69Mbps. That’s a stonking speed usually only enjoyed by urban dwellers.

For farms where there is no 4G signal anywhere near – which is probably still most of them – none of this will work. However Mr Guy reckons that a proportion could get a decent improvement in broadband speed.

He is now offering a service to farmers under the name of Agri-Broadband. This will involve finding 4G hot spots, plus supplying and setting up the system.

The farmer would put up the pole with the dongle and associated equipment.

The equipment is discreet and can be disguised, he says, and there should be no environmental fallout or planning issues.

The price of the service depends on the distances involved, but there is likely to be a one-off cost of between £1,000 and £2,000.