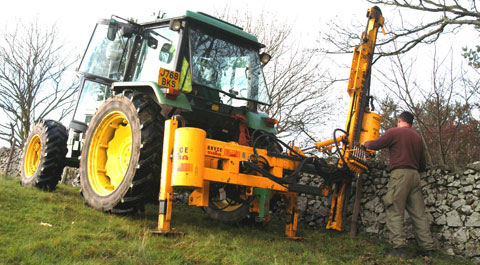 For a job as seemingly simple as knocking in a fence post, there is a remarkable number of features, options, adjustments and accessories to be found on what was once the humble ‘post knocker’.

Some developments are aimed fairly and squarely at safety; and a good thing too, because driving in fence posts has caused too many injuries and deaths over the years through risky operating procedures or inattention.

The job is still not fool proof but machine designs and special attachments that allow posts to be driven in upright while keeping the operator well clear of a falling heavy weight can only be a good thing.

Otherwise, features added to the bog-basic post driver are all aimed at speeding up the job ormaking it easier, mainly by providing hydraulic adjustments to accurately position the mast without having to repeatedly re-position the tractor.

At the top end, the range of adjustments available is remarkable – sideshift and backshift to position the mast perfectly; two- or four-way mast angle adjustment to get a post upright when the tractor is sitting on a dramatic slope; and slew adjustment of the entire machine to work in different positions or to edge the mast into an awkward corner beside an existing fence or wall behind a tree.

There is also more scope for mounting a post driver on a tractor loader or telescopic handler, a mini digger or a full-blown excavator. And among fencing contractors looking to put up a long run of fencing every day, self-propelled vehicles, usually tracked to cope with rough terrain, to carry posts, accessories and a driver are also more commonplace.

The most common means of driving posts is to raise a weight guided by a mast of fixed length or with a telescopic configuration and let it drop – ideally on to a steel post cap to prevent impact damage.

On all Twyman drivers from Kidd FarmMachinery the weight is tapered and runs in a slot in the mast to ensure the driving forceis applied down the centerline of the stake.

A telescopic mast, such as the design used on all Bryce Suma postdrivers, can be used to vary the drop height and impact force to suit different ground conditions – and it reduces overall height for transport.

The hinged mast option for the Fairbrother KingHitter Series 3 offset driver from McArthur Cyclone is alternative approach to transport convenience.

Single or double rope pulleys are most commonly used, operated by either a long direct-pullhydraulic cylinder or by a short cylinder actuating a pulley arm. Cross Agricultural Engineering takes anovel approach to lifting the 450kg weight on its post drivers – a hydraulic motor raises it on a chain; a quick-flow return allows the hammer to fall.

The Post Basher from Brown’s Agricultural Machineryis at the other end of the technology scale. It drives inposts with a ‘hammer action’ as the tractor’s three-point linkage is raised and quickly lowered.

One advantage of this approach is that it can drive posts 3.35m (11ft) away from the tractor – so maybe over a ditch, for example; and at £1125, it’s also the cheapest ‘power driver’ on the market.

But it’s also a one-off implement these days as most operators have moved on to easier-to-use mast machines.

The simplest and lightest post drivers have a basic mounting frame to position the mast centrally on the rear three-point linkage. Lack of offset means thetractor must be driven along the centre-line of the fence run or backed up to each post and positioned accurately to create a neat fenceline.

There are also heavier duty models using this format, including the Post Hammer from Brown’s and the King Hitter Series 2 fromMcArthur Cyclone, both of which have a compression spring to propel the hammer on its downward journey, and theShaver HD models Appin-Wood Machinery.

While the most basic-spec models of this type have limited vertical adjustment of the mast using the top link connection and a turnbuckle, hydraulic versions addconvenience and often more pronounced adjustment.

The Vector Powerdrive Model 2, for example, has a back frame thatcan tilt the mast left or right while the top link moves it forward and back. The 2+ version goes further by mounting the mast on a pin that allows up to 30deg of left/right movement from vertical.

Positioning the post driver mast to one side rather than centrally makes it easier to work along a line of posts laid out ready for hammering in, especially ifthey need to go in tight up against a hedge or along the edge of a bank.

Mounting the mast on a frame in a permanently offset position is the approach taken for the Brown’s Post Hammer and King Hitter drivers, the Vector PowerdriveModel 4 and all Bryce Suma Agri and Profi heavy duty implements.

Quantock Farm Machinery has the fixed offset PD3 with the option of a telescopic sideshift frame that pushes the mast beyond its transport position tucked behind the tractor’s rear wheel.

This facility also appears on the front- or rear-linkage mounted WRAG Penna; in fact, most manufacturers of offset drivers have this facility as a standard or optional feature because of the added flexibility it brings.

The backshift facility available on several Bryce Suma post drivers, the P22 Contractor from Protech Machinery and the Vector Model 4 further helps in fine tuning the mast’s position without having to hop on and off thetractor when working alone.

The latest version of the Suma has another trick up its sleeve, though; with Quadshift, the entire implement can be rotated about a swivel joint on one of the lower linkage mounting arms to move the mast through an arc of 1100mm.

In combination with the other adjustments, this can allow the mast to be manoeuvred into tight field corners close to walls, hedges and trees – obstacles thatmight otherwise force a return to the old two-man hand-held post rammer.

With a telescopic section added to the slewing arm that holds the post-driving mast on ‘swinground’post drivers, a single mechanism provides backshift when themast is positioned to the rear of the tractor and sideshift when it is worked to one side.

It’s a handy feature for added versatility on the Brown’s Giraffe, Parmiter Swing Round from Shelbourne Reynolds, on Protech’s Pseries, the Quantock PD and Twyman Swinground machines.

This adjustable extending arm is also standard on the WRAG Powerswing driver, which as the namesuggests, comes with a hydraulic cylinder to move the mast so that posts can be driven in anywhere behind or to one side of the tractor with the arc through which themast can be moved.

On the Powerswing, this extends to 120deg from the fully offset position; others with hydraulic slew are typically limited to 90deg or can work through a full180deg by using twin slewing cylinders.

Manually positioned versions, which cost a little less and have fewer hydraulic demands, can also work through a 180deg arc, although usually in steps determined by the pin and hole locking positions.

Some post driver designs lend themselves to being mounted on a tractor loader, mini excavator or telescopic handler for added versatility when fencing in awkward locations. On a telehandler or mini digger, it is often quite feasible to drive posts across an existing fence or a ditch.

Simple versions of the ‘nodding donkey’ style post driver, which uses a much shorter hydraulic cylinder to lift and lower the hammer using a pivoting arm and pulley, are also available for this approach – including those in the Protech and WRAG productranges, the Parmiter line-up, and the Twyman range.

Apart from its recently introduced compact tractor driver,Chalke Valley Engineering specialises in loader-mounting for its Postpuncher implement. This driver remains unique in having its hammer fully enclosed in a tube, primarily for safety.

High frequency vibration is an altogether different approach to getting fencing stakes intotheground; it’s reckoned to be quieter than the thump, thump, thump of a regular design and can be quicker, too.

Autoguide Equipment has developed a smaller version of its industrial-scale Post Master industrial unit to fit on to a minidigger or similar host vehicle.

This one is powerful enough to drive in stakes without a point (including gate posts andstrainersif a pilot hole is drilled first) and to extract posts insituations where an existing fence needs to be taken down or moved.

Contractors who erect fences for a living – and especially those working on difficult terrain– are turning to self-propelled machines for driving in posts.

Bryce Suma’s Fencemaster is also based on an ex-dumper converted into a bespoke machine with a shortened chassis and purpose-made rear linkage to carry a regular Suma Profi post driver.

Mid-mounting the post driver on Bryce’s smaller Powershift model is said to ensure good weight distribution and stability when travelling over rough terrain, while semi-mechanical drive should permit positioning adjustments without having to rev the engine unduly, as can be the case with hydrostatic drive.

Protech and Vector also build bespoke self-propelled tracked fencing machines, which in common with the others have duplicate remote vehicle controls alongsidethose for the post driver to allow convenient one-man operation.