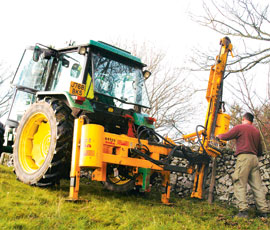 For a job as seemingly simple as knocking in a fence post, there is a remarkable number of features, options, adjustments and accessories to be found on what was once the humble “post knocker”.

Some developments are aimed fairly and squarely at safety; and a good thing too, because driving in fence posts has caused too many injuries and deaths over the years through risky operating procedures or inattention.

The job is still not foolproof but machine designs and special attachments that allow posts to be driven in upright while keeping the operator well clear of a falling heavy weight can only be a good thing.

Otherwise, features added to the bog-basic post driver are all aimed at speeding up the job or making it easier, mainly by providing hydraulic adjustments to accurately position the mast without having to repeatedly re-position the tractor.

At the top end, the range of adjustments available is remarkable – sideshift and backshift to position the mast perfectly; two- or four-way mast angle adjustment to get a post upright when the tractor is sitting on a dramatic slope; and slew adjustment of the entire machine to work in different positions or to edge the mast into an awkward corner beside an existing fence or wall behind a tree. There is also more scope for mounting a post driver on a tractor loader or telescopic handler, a mini digger or a full-blown excavator. And among fencing contractors looking to put up a long run of fencing every day, self-propelled vehicles – usually tracked to cope with rough terrain, to carry posts, accessories and a driver – are also more commonplace.

There is nothing simpler – nor cheaper – than the Post Basher from Brown’s Agricultural Machinery. It drives in posts with a hammer action as the tractor’s three-point linkage is raised and quickly lowered, and it can drive posts 3.35m (11ft) away from the tractor – so maybe over a ditch, for example.

But it is a one-off implement these days as most operators have moved on to easier-to-use mast machines.

Cross Agricultural Engineering takes a novel approach to lifting the 450kg weight on its post drivers – a hydraulic motor raises it on a chain; a quick-flow return allows the hammer to fall.

Using a hydraulic ram and rope pulley is the more common approach, with those having a direct pull mechanism arguably the simplest. Employing a vertical long-stroke cylinder to lift the weight, there are machines that attach the mast to the front or rear three-point linkage suitable for tractors large and small. Lack of offset on the simplest versions means the tractor must be driven along the centre-line of the fence run and positioned accurately to do a neat job.

Heavier duty models using this format include the Post Hammer from Brown’s and the King Hitter Series 2 from McArthur Cyclone, both of which have a compression spring to propel the hammer on its downward journey, and the Shaver HD models from Appin-Wood Machinery.

The Bryce Suma Powershift range has a telescopic mast and double pulley system to extract maximum “power” from a 3.4m drop height without creating an unwieldy implement for transport.

While the most basic-spec models of this type have limited vertical adjustment of the mast using the top link connection and a turnbuckle, hydraulic versions add convenience and often more pronounced adjustment.

The Vector Powerdrive Model 2, for example, has a back frame that can tilt the mast left or right while the top link moves it forward and back. The 2+ version goes further by mounting the mast on a pin that allows up to 30° of left/right movement from vertical.

An alternative approach comes on the Rabaud Turbofrap “pendulum” post driver from DCH Farm Supplies and Appin-Wood – its mast is suspended from a crane-like hydraulic arm so it always hangs vertical.

The compact configuration of this post driver design lends itself to being mounted on a tractor loader, mini excavator or telescopic handler for added versatility when fencing in awkward locations.

On a telehandler or mini digger, it is often quite feasible to drive posts across an existing fence or a ditch.

Simple versions of the “nodding donkey” style post driver, which uses a much shorter hydraulic cylinder to lift and lower the hammer using a pivoting arm and pulley, are also available for this approach – including those in the Protech and WRAG product ranges, the Parmiter line-up from Shelbourne Reynolds, and the Twyman Kidd Farm Machinery range.

Apart from its recently introduced compact tractor driver, Chalke Valley Engineering specialises in loader-mounting for its Postpuncher implement. This driver remains unique in having its hammer fully enclosed in a tube, primarily for safety.

Positioning the post driver mast to one side rather than centrally makes it easier to work along a line of posts laid out ready for hammering in, especially if they need to go in tight up against a hedge or along the edge of a bank.

Mounting the mast on a frame in a permanently offset position is the approach taken for the Brown’s Post Hammer and King Hitter drivers, the Vector Powerdrive Model 4 and all heavy duty Bryce Suma implements.

Quantock Farm Machinery has the fixed offset PD3 with the option of a telescopic sideshift frame that pushes the mast beyond its transport position tucked behind the tractor’s rear wheel.

This facility also appears on the front- or rear-linkage mounted WRAG Penna; in fact, most manufacturers of offset drivers have this facility as a standard or optional feature because of the added flexibility it brings.

Further help in fine tuning the mast’s position without having to hop on and off the tractor when working alone comes from having a backshift facility, which is also available on the Vector Model 4 and several Bryce Suma post drivers.

The latest version of the Suma has another trick up its sleeve; with Quadshift, the entire implement can be swivelled to move the mast through an arc of 1,100mm.

In combination with the other adjustments, this can allow the mast to be manoeuvred into tight field corners close to walls, hedges and trees – obstacles that might otherwise force a return to the old two-man hand-held post rammer.

With a telescopic section added to the slewing arm that holds the post-driving mast on “swing round” post drivers, a single mechanism provides backshift when the mast is positioned to the rear of the tractor and sideshift when it is worked to one side.

It is standard on the WRAG Powerswing driver, which as the name suggests, comes with a hydraulic cylinder to move the mast in an arc, in this case extending 120° from the fully offset position. Others with this facility are typically limited to 90° or can work through a full 180° by using twin slewing cylinders.

Manually positioned versions, which cost a little less and have fewer hydraulic demands, can also work through a 180° arc, although usually in steps determined by the pin and hole locking positions.