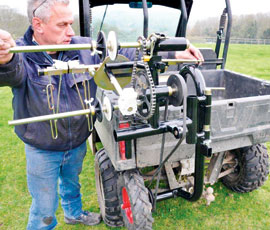 Fencing equipment can be pretty bespoke stuff. Oliver Mark rounds up a few of the machines on the market, as well as some clever farmer inventions.

Utility vehicles are proving increasingly popular on livestock farms, and that has prompted Hampshire company Rappa to adapt its ATV-based fencing system to suit UTV users.


The adjusted mechanism has a different reel-arm set-up to its ATV counterpart, and sits on the left-hand side of the UTV to make life easier for the driver. It attaches to the rear tailgate by a steel frame which the company says can be attached or removed in seconds.

Rappa suggests that the system is particularly handy for fencing pokey field corners or hilly ground. 600m worth of fencing and stakes can be carried on the machine, with plenty more space in the back of the UTV should you want to take more.

Made in the company’s Stockbridge, Hampshire factory, the machine costs about £900. 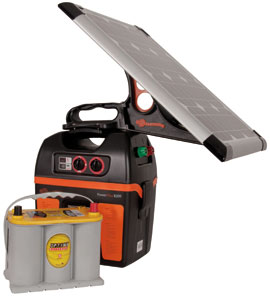 Solar panel technology has really come of age over recent years. It wasn’t too long ago that panels needed the sun’s rays to be beating down on them all day to produce any power (obviously not ideal for the UK), but that’s not the case with New Zealand firm Gallagher’s most recent solar development.

The solar panel works off ultraviolet light, so there’s no need for direct sunlight and the company reckons it can even work under a thin layer of snow.

The panel is used together with a suitably sized Energizer and 12v battery. The battery is trickle-charged by the solar panel, with a regulator attached to prevent it from being overcharged.

It means the battery should last almost indefinitely – ideal for fields further away from the farm where travelling to and fro to switch batteries might be inconvenient.

Size-wise there are five different solar panels from 7W to 64W depending on the length of fence and type of animals being contained. Costs range from £203 for the small panel up to £837 (including VAT) for the largest version, although the company says the most popular are the 20W and 32W mid-rangers. 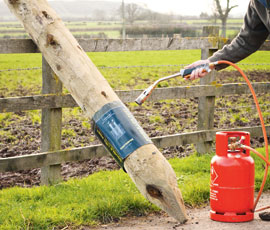 The phasing out of creosote – the fence erectors’ tar-based preservative of choice – in 2003 led to serious problems with fence post longevity. That’s where Postsaver aims to help – by covering the vulnerable section of the post (where it meets the ground) with a sleeve to keep wood preservatives in and decay out.

In fact, the company says sales have almost doubled year on year since the creosote ruling, with almost 750,000 sleeves a year currently being produced.

The sleeve has a tough polythene outer layer which protects a meltable bituminous liner underneath. To attach it to a post the sleeve must be heated using a blowtorch, causing the bituminous liner to shrink and seal the surface of the wood, gluing the polythene sleeve on.

The polythene skin of the sleeve is tough enough to be driven into stony soil without being damaged, and the key is to bury 300mm of the 350mm sleeve underground, the company says. That way it protects the most vulnerable part of the post where air, moisture and organic matter create a haven for decay-causing insects and fungi.

The sleeves are made in Wakefield, West Yorkshire and exported to mainland Europe and America. Cost is about 60p each depending on size (there are 12 sizes ranging from 75mm to 300mm posts), and sleeves are sold in packs of 10 or 150. 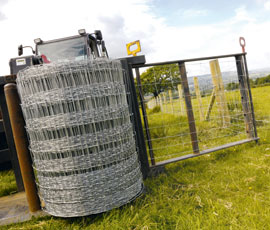 Lancashire firm Quickfencer has sold over 1,000 fencing machines since developing the system in 2004.

The fencer attaches to a three-point-linkage or telehandler (via an adapter bracket made by the company). Once attached it can carry two bulky 500m fencing roles.

The pivot system allows the machine to work in both directions at 5-10mph, according to the maker.

Tensioning the wire requires some steady work on the foot clutch as it’s just a case of clamping the wire in the Quickfencer mechanism attached to the tractor and creeping forward to pull it tight. The wire can then be tacked to the straining post.

There are various attachments available for the machine, including a barbed wire system and hydraulically driven wire roller. 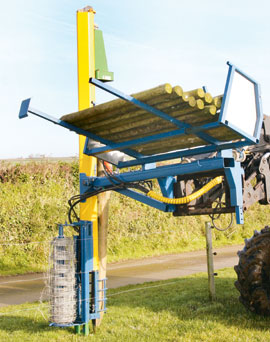 Having battled with sledge hammers and manual post-bashers, David Carbis decided he could make fencing a one man job. His automatic fencing machine carries about 35 stakes, which it stands up, holds in position and knocks into the ground.

It takes less than a minute to knock each post in, using a combination of gravity, hydraulics and simple trip mechanisms. The entire sequence is run hydraulically via the loader’s joystick, and the rear spools operate the post knocker, stake loading system and clamping device.

The auto-fencer can also be used to unroll and tension galvanised sheep wire, rabbit fencing and electric fencing. The mark II version of the auto-fencer is currently being worked on by students at Bath University and is due to be ready for production some time later in the year.

• Our step-by-step guide to the auto-fencer

Kent farmer Richard Ledger invented his rabbit fencer in an effort to control the perennial problem of rabbit damage to his arable fields.

It attaches to a tractor three-point-linkage and can save hours of backbreaking spade work to stop the blighters burrowing underneath.

Because up to two miles a day can be covered, Mr Ledger’s mounted system carries two rolls of netting – one to unwind as the tractor moves forward and another as a spare. 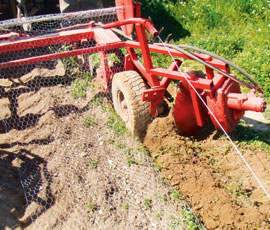 The right-hand side of the frame has a front disc and mouldboard combination taken from a Kverneland plough which opens the furrow. Behind that the netting is unwound and pushed into the base of the 125mm furrow by a wheel. A scalloped disc driven by a hydraulic motor finishes the job by pushing the soil back into the furrow.

A plain straining wire is also fed out to support the wire netting, ready for a following team to bash the posts in and tack the fence to them.

Mr Ledger currently hires out the fencer across the country, and plans to make another before summer 2012.

• You can also see our round-up of the latest post-knockers on the market in our fence post driver guide 2012.