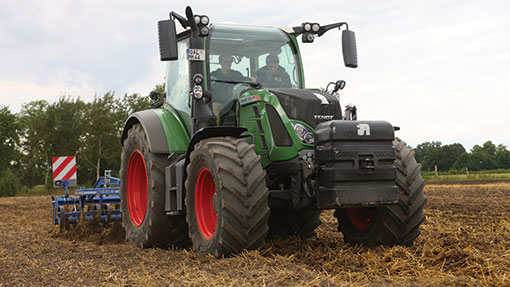 Fendt tractors always seem to perform well in our in-depth tests and the 516 was no exception. It topped the scorecard for technical ability and driver comfort as well as performing well in the DLG tests. We had a few grumbles about the rear linkage control, though, and the price tag means it’s only suited to those with deeper pockets. Base price: £133,458

The Fendt 516 shares the same 5-pillar cab as its larger 700-series siblings. This didn’t make it the biggest on test, but the well-thought-out design and lack of clutter made it feel spacious enough.

Having the windscreen extend into the front of the cab roof also let in plenty of light, and if a loader was fitted, it would give an uninterupted view of attachements without the need for a separate roof window.

Build quality was up there with a well-specced hatchback and the control panel was easily the slickest on test. The lorry-sized, chunky steering wheel wasn’t to every tester’s liking, though.

From the left, it was a pretty leisurely climb to get into the Fendt’s cockpit and the pedal-operated steering wheel tilt gave plenty of room to slide into the seat. Passengers were also well catered for with a comfortable second seat that has a foldaway side to give the driver more space. It also folds flat to make a table for your tuck box.

The Fendt is packed with clever design features and the system for mounting external boxes was undoubtedly the best on test. This uses a neat mounting rail in the cab roof with a bank of sockets right next to it. This keeps the right-hand window completely clear and when boxes do need to be bought in they can be kept looking neat.

On the controls front, the 516 is almost identical to the 6-cylinder 700-series. All the main switches are grouped on the large seat armrest and there’s a sizable touch screen bolted on the front, too.

The trademark Fendt joystick takes centre stage, though. Its main job is to handle transmssion, acceleration and direction changes, but it can be programmed to carry out almost any function on the tractor. These include the two cruise controls, min and max engine revs and headland management sequences.

Our road test team said the Fendt gave a silky-smooth ride, but cab noise was recorded at a surprisingly high 74dBa.

The brakes were impressive, but the truck-like air brake on the side of the dash seems like a bit of an afterthought. However, it’s great for laughing at first time Fendt drivers who never seem to find it.

When we measured turning circle the Fendt came out on top with a diameter of 10.6m. There was also a handy fast-steer function that halved the number of turns to go from lock-to-lock. For safety reasons this starts to gradually increase the number of turns at speeds over 8kph.

The 516 was also the lightest tractor on test, weighing in at just 6.4t. The gross vehicle weight of 10.5t, was a tad above the group average leaving meaning it can carry a 4.1t payload.

Under the Fendt’s stubby snout sits a four-cylinder Deutz powerplant. This was one of the only engines without a boost function, but it delivered a meaty max power of 156hp at the pto.

This ranked it second to the 158hp Valtra in the power stakes, but when it came to torque the Fendt was king. In the DLG tests the 516 developed an impressive 678Nm of torque, which was 34Nm more than the Valtra.

Specific fuel consumption was also impressive, putting it 3% better than average at 232g/kWh. However, less frugal use of AdBlue made the combined figure just 1% better than the group average of 242g/kWh.

In the 6-point partial load test it registered 249g/kWh, which was 16g/kWh better than the group average. However, once AdBlue was taken into consideration, at a rather thirsty rate of 7%, it was much closer to the other contenders.

Engine speed is controlled using the hand throttle on the armrest, or by pressing either of the two engine rev memory buttons on the joystick and nudging it to the right.

Annoyingly, these these can only be adjusted by accessing the correct screen in the Vario terminal. It would be nice if there was a press-and hold funtion like the ones on some of the other test tractors.

It’s standard Fendt when it comes to the 516’s cog arrangement. Lurking in the bowels there’s a stepless transmission with two mechanical ranges – range one for field work and range two for the road.

These are switched using a button on the armrest that’s a bit too easy to forget about. It’s not uncommon to find yourself limited to 40kph on the road because it’s still sitting in field mode.

Nearby, there’s a button to put the transmission into neutral, but there’s no park function. That means the truck-style air brake on the side of the dash has to be engaged before the engine is stopped.

Drivers can use the transmission in two modes that are selected via a blister button on the armrest. Pedal mode puts the foot pedal in charge of forward speed, leaving the tractor to handle engine revs and transmission ratios. Stick mode, meanwhile, transfers this funtion to the joystick, making the foot pedal redundant.

Direction changes are handled by clicking the joystick to the left or using the tiny flicker switch by the steering wheel. The forward/ reverse flicker was the poorest on test and wasn’t really worth using in our opinion.

In the lifing rear lift test, the Fendt managed an impressive 7.3t, but the controls were less of a highlight. The main problem was that the stop button is separate to the main raise and lower switch.

This made it too easy to miss when trying to stop the link arms in a hurry. The rear lift switch isn’t proportional either, which means it can be a bit jerky when picking up an implement. We programmed the rear lift onto one of the spool paddles, which solved the problem nicely. However, it had the knock-on effect of stopping the quick lift function from working.

The Fendt’s hydraulics are controlled using the four colour-coded electric paddles on the armrest and the a stubby cross-lever next to the main joystick. Two of buttons on the top of the main joystick can also be programmed to operate spools.

Spool locations can be moved from switch to switch in the main screen and flow rate can be adjusted in there too. The standard hydraulic pump delivers 110-litre/min, but our test machine was fitted with the optional 160litre/min one.

There are three pto speeds on the Fendt – 540, 540e and 1000. These are switched easily using the buttons on the side of the arm rest or by selecting them in a headland management sequence.

The automatic pto function is also only available when it’s put into a headland management sequence. This is then operated using the go and end buttons on the joystick.