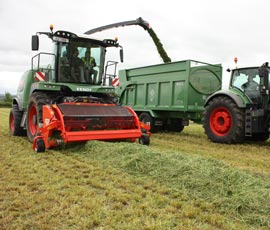 It’s not often that a new make of self-propelled forage harvester comes to the market. But this week Claas, New Holland, Krone and Deere were joined by a fresh name – Fendt.

The German company first announced that it was making a SPFH back in 2010 and machines have been in the UK for testing for some time. But last week was the official launch of the 653hp Katana 65, with local contractor Martin Haskett cutting a surprisingly lush crop of grass on Wyke Farms near Wincanton in Wiltshire.

Fendt has aimed its sights firmly on the full-size 550-750hp SPFH market. That’s currently a smaller sector of the European market than the mainstream 400-550hp machines. However the company says it’s a sector that’s likely to expand as contractors aim to boost their throughputs.

There’s a big market for these machines in Europe, with German farmers and contractors buying 700 every year, the French buying 300 and the UK 165 machines annually. The company says it had already sold 100 machines by 2 May and aims to sell 300 a year.

Fendt is aiming for a gentle start in the UK. Two machines are operating now, with eight coming later in the season. Four dealers have been appointed, Ross Agri Services in Scotland, RVW Pugh in Wales and the West, Redlynch Ag Eng in the West and Alan Snow in the South West.

A 16.0-litre Mercedes-Benz MTU V8 engine with SCR delivers the Katana’s 653hp firepower. It’s mounted lengthways in the machine (most makers put them side-on), which is said to help stability, cut turning circles and give better visibility over the rear bonnet.

Drive goes straight into a speed shift gearbox, which gives two operating modes. For maize or heavy crops of grass the engine will run at 2,000rpm, however for lighter crops it can be dropped to 1,600rpm. If you have a good wide rake, that could potentially save 20-25% of fuel, reckons the company.

It’s only the engine revs that change, Fendt points out – the feed rollers, chopper and blower run at the same speed in both modes.

The fuel tank holds 1,100 litres of diesel and 220 litres of AdBlue. Meanwhile a 40kph gearbox will help contractors get from farm to farm in brisk (though fully legal) fashion.

Six 720mm-wide hydraulically driven feed rollers compress the crop and feed it into the chopper, with the metal detector fitted to the outer roller to give it as much distance as possible from the drum.

The chute gives a maximum loading height of 6m and can swivel through 210deg. Meanwhile, a wireless video camera system lets both the forager driver and the trailer driver see the inside of the trailer. Auto-sharpening is standard and on-board weighing is on the way.

The Katana’s corn cracker is a standard fitment on the Katana and can be engaged with the press of a button, says Fendt. It’s a new design that uses 265mm diameter interlocking, V-shaped rollers to deal with the crop. It hydraulically swivels out of work when you change back to grass.

Fendt says the big Visio cab is a new design, though the operating system of the 10.4in touchscreen will be familiar to anyone with a Fendt tractor or MF Beta combine. As well as the usual control buttons, the multifunction joystick has assignable buttons for oft-used things such as lights and CB radio call-up.

All-wheel-drive and rear axle suspension, similar to that on Fendt tractors, is standard. There’s also a traction control system that automatically operates the diff-lock and another that senses when a wheel is slipping and swiftly diverts drive to the others.

Large side-doors open on a parallelogram linkage system for access to engine, hydraulics and filters. These can be locked in place, providing a pair of safe hand-rails if you need to walk to the back of the top of the machine.

Keep up to date with the latest machinery news