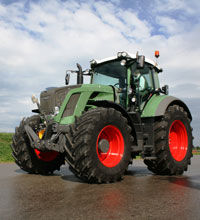 But that will expand to five new models that span the 200hp to 280hp bracket, plus the existing 818 and 820 versions. All the new models will have a top speed of 60kph (40kph), like their larger 900 stablemates.

This all-new range aims to combine the compactness of the 820, currently the company’s best-selling model, with the power, cab and transmission technology of the 900 series.

It is also the first to use a combination of Deutz engines and the same emissions-cutting AdBlue technology seen at last year’s launch of the Sisu-engined MF8600 tractors.

The six-cylinder 6.06-litre Deutz packs 1210Nm torque at 1900rpm, and thanks to this after-treatment with urea, fuel use should be cut by 5% compared to engines without it, according to Fendt. AdBlue consumption will be roughly 5% of normal fuel consumption and the tank, which is located under the frame of the cab, needs to be topped up each time the 505-litre fuel tank is refilled.

Weighing in at 9300kg, the new 800 Varios are 2115kg heavier than the 820, yet still 800kg lighter than the big-brother 900 Vario. For those who need to transfer more power to the ground, it’s possible to fit enough rear and front ballast to take it to a massive 16t.

The Vario transmission used in the new 800 range gains an extra pump to reach the top speed of 60kph. This twin pump arrangement has only been used in the 900 series until now and is teamed with a new rear-axle drivetrain plus dual wet multi-disc brakes.

The new 800 models also get a new front axle suspension with exterior spring cylinders coupled with dual-line braking and a beefed up disc brake.

At over 20kph, Fendt’s FSC stability control system kicks in, causing the hydraulic cylinders at the front to stiffen when negotiating bends or corners. A three-point suspension on the cab means the driver shouldn’t feel any of the bumps or vibrations, either.

The range also sports a new Variotronic terminal, available in either 7in or 10.4in screen sizes. It can be operated using the touchscreen or through a more conventional dial-and-button format. It’s fully ISObus compliant, says the company, and now combines Fendt’s auto steering system (VarioGuide) with its VarioDoc documentation software.

Three spec levels will be available: Power, which has the 7in screen; Profi (which is expected to be the standard spec imported into the UK) and Profi Plus, which gets the 10.4in screen as standard coupled with autosteer.

Prices will be announced soon, says the company, and UK sales are likely to start next August.

Fendt has also completed its shift to CVT in its 200 Vario range, meaning the manufacturer now offers a complete range of tractors from 70hp to 360hp, all with CVT transmissions.

The five model 200 series ranges from 70hp to 110hp and all models are powered by a water-cooled 3-cylinder 3.3-litre Agco Sisu Power common-rail engine.

This punchy little tractor puts out 458Nm of torque at 1900rpm and, compared to standard powershift transmissions, should see fuel savings of nearly 7% on a typical mixed farm, claims Fendt.