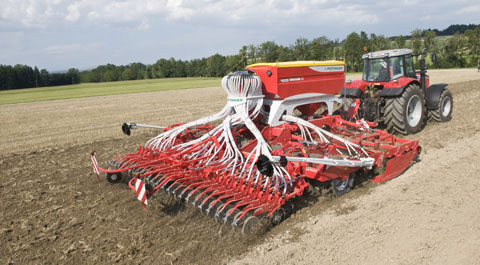 The technique of placing fertiliser at drilling time is moving out of its traditional stronghold in Scotland and northern England as growers in other parts of Britain look for ways of giving spring and winter crops alike an early nutrient boost.

Growers wanting to place fertiliser with grain used not to be too well catered for when it came to drill choice and capacity. But increased interest in this approach outside of those areas where it is a long-established technique has encouraged manufacturers to devise grain-and-fertiliser or combined drills of just about every configuration.

Arguments remain as to the best location for fertiliser in the soil. In Scotland, it has long been the norm for spring barley growers to put fertiliser down the spout.“It gets the crop away better to make use of a growing season that begins with short days and cold soil temperatures,” says Simon Brown of Amazone. “Putting NPK down the spout can also help prevent manganese deficiency.”

This technique is particularly helpful in making good use of phosphate because of its lack of mobility in the soil. Placing it in the row makes it readily available to encourage root development in search of a potential source of moisture.

Combined grain and fertiliser sowing can be used to partially feed the crop or – especially for spring sowings – apply the entire nitrogen requirement and avoid having to go on with a fertiliser broadcaster.

“The use of wider row spacing and increased min-till or direct sowing for oilseed rape is also seeing fertiliser applied on the drill,” adds Simon Brown. “Band application of a little starter N compensates for the loss of soil nitrogen caused by straw and crop residue decomposition, while adding phosphate helps root development.”

Putting fertiliser down the spout of a power harrow-seed drill combination is no great challenge – simply mount a hopper and metering system on the front of the tractor and feed it back to the coulters.

So what do the different manufacturers offer? Here’s a round-up.

The Kverneland outfit comprises a divided 2,250-litre front hopper with press wheels and a metering/transfer system to the distribution head, which together with a rigid toolbar carrying double-entry Suffolk or CX disc coulters, is located on a 3m or 4m NG-S Pro power harrow.

Kverneland DF standalone front hoppers of 1,150-litre, 1,650-litre, 1,700-litre and 2,200-litre provide a similar facility for rear-mounted drills. The Kverneland Accord DFC 3m + 4m drills can also be used with a front tank

Horsch also has a placement system for the Pronto DC and SW disc cultivating drills that keeps seed and fertiliser segregated. “It uses a dedicated row of discs to place fertiliser between and a little deeper than the seed rows,” explains Steve Burcham of Horsch.

Väderstad uses a banding system on the Spirit F Combi light-to-medium soil seeder to give the machine added versatility.“Fertiliser is delivered to steel tube coulters mounted on the arms that carry the system discs,” explains Andy Gamble of Väderstad. “Spaced 125mm apart, they place the fertiliser in a band approximately 25mm wide and 25mm deep.”

This approach avoids seed burn but delivers nutrition where and when required, he points out. It can be used for starter doses of N when sowing oilseed rape, as well as to under-sow cereal crops.

On the Rapid drills, fertiliser is “sown” using disc coulters that place the material between the seed rows and a little deeper. For seed-only drilling, the discs remain in work to add to the cultivation effect and can be raised to reduce draft and avoid unnecessary wear.