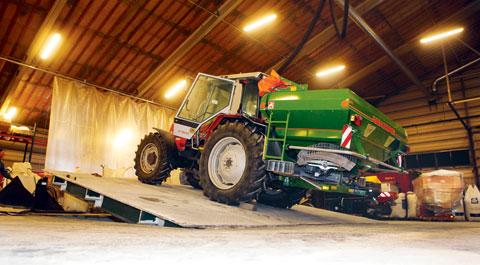 
The ZA-M Ultra was introduced in 2002. Amazone offers both mechanically and hydraulically driven spreaders, and the German manufacturer pays a lot of attention to operator safety.

After calibrating the flow of fertiliser and spread pattern using the tray test, Amazone scored a CV of 5.1%, which is good.

Before adjustment, the spreader had a CV of 13.6% which, although well within the limit, is erring on the high side.

This can be explained as the Amazone spreading table is based on a rougher Yara CAN than used in the test.

Only 0.2% of fertiliser went beyond the boundary, which is good. The distribution of fertiliser along the side is good, indicated by the CT of 22.4%.

The border spreading device is on the left, and by using the computer this can be folded down hydraulically with the application rate reduced automatically.

Amazone uses the Amatron+ computer for spreaders, sprayers and drills. Although it has large, clear buttons, there is no colour screen. And, because there are a lot of symbols and values the display looks busy.

On the back, there’s a shift button which doubles the function of the buttons on the front.

The spreader is available with ISObus, which then allows it to be compatible with colour and touch displays like the CCI 200-terminal.

Setting is pretty simple. Find the name of the fertiliser in the supplied spreading table (or on the internet) then enter the calibration factor and application rate into the terminal (0.98 for Yara CAN).

Adjust the vanes on the spreading disc – the small vane goes in position 19 and the large one in position 44 – using the wing nuts. This is harder than using a lever or having a computer to set it electronically.

The spreader always spreads at 540rpm with a disc speed of 720rpm.

The Amazone spreader is the most accurate and user-friendly when it comes to operators adjusting the spreading pattern to get the best accuracy.

You use four trays; three on the right-hand side (at 6m, 12m and 18m distance) and one in the middle. Then you repeat that to make sure the spreading pattern is symmetrical.

After the spreader has passed over the trays, fertiliser is collected in four plastic containers each with a scale, with each value entered into the computer.

This calculates to what extent the operator needs to adjust the vanes. If the distribution is good, there’s no need to adjust them. This system works well and is much better than using comparison charts in the manual to fine-tune spreading, as other manufacturers do.

The spreader looks quite complicated, partly due to the limiter. There are steep ladders on both left and right sides of the hopper and four viewing windows.

All parts that come into regular contact with fertiliser such as vanes and limiter as made of stainless steel. However, there are lots of corners in which fertiliser residue can gather, which makes it harder to clean.

Paint quality is good, although there are a few areas where it seems thinner and around the lighting panel it’s possible to see spots of rust.

Amazone says this was a problem with the light housing and is solved on new models.

Amazone is the only brand that alters the spreading width by changing the position of the vanes on the discs.

All other makes change the position of the discharge point above the disc. This adjustment is done with wing-nuts, so no need for tools.

The ZA-M’s weigh frame uses a rear-mounted weigh cell positioned in the middle of the frame.