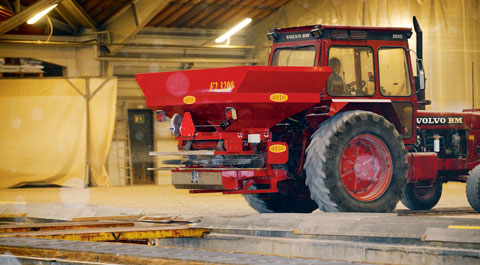 Despite the unusual spreading setup, the Bredal performed well. After adjusting the machine according to the spreader table, the 3200 scored a CV of 8.7%.

However, according to the manual, this spread pattern could be better.

Having done the tray test, the bar graph looks like a “smiley” – too little fertiliser in the middle and too much to the outer edges – indicating the spreading width is set a little wide.

After adjustment, the Bredal scored 4.9%, which is good.

Border spreading is located on the left-hand side. Application is reduced by 10%, pto speed is lowered by a further 20% and a hidden door in the left hand chute has to be opened manually.

The electro-hydraulically driven gearbox then reduces the speed of the left disc by 33%. The results of this seemingly complex arrangement are excellent – 0.24% of fertiliser was found beyond the boundary and the CT is just 17%.

The TeeJet 500, Bredal’s spreading computer, stands out for its easy-to-use simplicity.

Although it lacks a colour screen and ISObus compatibility, all functions can be found quickly.

Setup is simple. The density of the fertiliser can be found in the spreading table or alternatively the operator can determine the actual density by using the supplied bucket. After this, the application rate, density and working width are entered into the computer.

Everything is adjusted electronically and the operator doesn’t even have to adjust the levers on the spreader. Spreading beyond 28m needs 1000rpm pto speed.

The collected fertiliser is compared to the bar graphs in the manual; equal distribution indicating that the spreader is set correctly, more or fewer granules in the outer trays suggesting the chute needs to be adjusted.

Because of the multiple driveshafts, extra gearboxes, hydraulic motors and transport belts, the construction of the F2 3200 looks overly complicated.

It also requires double the space of competitors’ machines under the hopper itself, making it higher and heavier than others on test.

The spreading discs are powered by a V-belt drive with variable speed. There is only one small sight glass to allow users to see in.

The weighing unit is located between the linkage and the spreader and if there is a difference between the actual and recorded weight, a flow factor calibration can be carried out when the machine is static, however this can’t be adjusted via the computer.

Spreading discs are made of steel and vanes are stainless steel, however overall welding quality could be better.

The open design is prone to collecting dirt, but is also easy to clean.