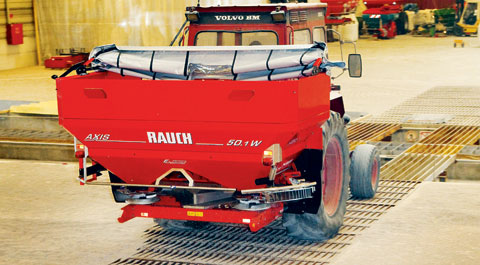 
German manufacturer Rauch builds fertiliser spreaders, grit spreaders and pneumatic seed drills, and the Axis 50.1 was introduced in 2007. Rauch is sold in the UK, France and Italy under the Kuhn banner.

The spreader was set according to the manual and delivered a CV of 8.2%, which is a good result.

No further adjustments were needed, however, in the manual if any tray contains more than 15% above the average, it’s recommended that the settings are adjusted.

On test, the highest was 13.5%, so that was good enough without adjusting the spread pattern.

Push a button to activate the border spreading setting and the application rate is automatically dropped by 20% and the limiter is electrically lowered on the right-hand side of the machine.

Distribution on the headlands was 18.7%, another good figure.

The spreader is supplied with the Quantron E computer. Although it has a colour screen, the display is still in black and white and it’s not a touchscreen.

It’s a clear and intuitive system, though, thanks to logical symbols and buttons. As well as being ISObus compliant, it’s equipped with a USB for data transfer.

For those wanting more sophistication, a touchscreen is available.

To set the machine, you first need to find the name of the fertiliser by using the supplied spreading tables, the internet or the CD supplied.

Because of the multitude of spreading tables and the fact that these can alter so regularly, Rauch doesn’t offer a book.

However if you use the CD-ROM, the computer will automatically check for updates. The next step is to enter the flow factor in the spreader computer, the application rate and the outflow position.

Everything is done electronically and the operator doesn’t have any levers to alter.

The manual suggests you put four trays at 4.5m, 9m, 13.5m and 18m on both sides of the spreader when dealing with a large working width.

With a tray in the middle, a total of nine trays are needed and the operator needs to cross these trays three times.

If the results deviate less than a given amount, the spread pattern is fine.

The manual shows seven examples of incorrect spreader patterns and what to do if these occur.

The side-spreading function can be adjusted, although Rauch doesn’t illustrate a tray test procedure for this, instead offering a brief explanation of how it can be adjusted if the operator thinks too much fertiliser is ending up in the ditch.

The quality of construction on the Rauch was the highest of those on test. It’s a sleek and good-looking machine with a durable finish.

There are four viewing windows at the front, two at the rear and two in the hopper cover.

The front of the spreader is protected by a robust plastic sheeting material to avoid mud damage from the tractor tyres.

The disc drive is oil-immersed and maintenance free and only the pto has greasing points. All corners and parts are easily accessible with a pressure washer.

The agitator rotates at only 18rpm, meaning the fertiliser has less chance of getting crushed. The weigh frame has two cells but no reference sensor.

All parts that come into direct contact with fertiliser are made from stainless steel.