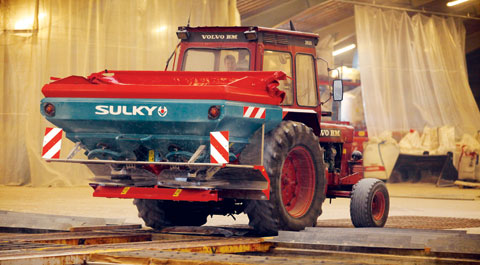 
French manufacturer Sulky builds drills and tillage kit as well as fertiliser spreaders. Imported into the UK by Cambridgeshire firm RECO, the X44 was introduced in 2007 and heads Sulky’s range of spreaders.

After setting the spreader according to the table, the Sulky spreader achieved a CV of 8.6% in the field test, which is good.

However, the spread pattern wasn’t completely symmetrical. Sulky uses a curved third vane on the right-hand disc for border spreading.

When application rates are below 200kg/ha this doesn’t affect the spreading pattern, but at higher rates this vane catches some of the granules destined for the longer vane and spreads them closer to the spreader.

This means land adjacent to the spreader receives too much fertiliser and land further towards the spreading width edge doesn’t get enough. When we tried to improve the spreading pattern, we failed.

When in border spreading mode, the disc rpm is reduced by 10% to 480rpm. The discharge outlet electronically shifts several centimetres to the right, so that the border spreading vane takes over the flow of fertiliser from the longer primary vane.

Only 0.9% of the fertiliser spread ends up beyond the boundary (the best on test) and the spreading pattern from field to boundary (or CT) is below 25%, which is ideal.

The Sulky display lacks a colour screen or touchscreen functionality. However, the menu structure is clear and straightforward to use.

There is an SD card for data storage and transfer.

Set-up is simple – find the name of the fertiliser in the supplied spreading table or on the internet and put the calibration figure into the computer.

The application rate and the flow position is then configured taking into account the working width.

Everything is done electrically, and the operator doesn’t have to adjust any levers. Calibration can be done on the move by pushing a clearly marked button on the console.

Sulky is the only manufacturer that routinely supplies four trays and a granulometer (a box that separates granules into different compartments indicating spreading characteristics).

When it comes to adjustment, the manual says to put four trays to the right of the spreader.

However, once the spreader has passed over the trays, the Sulky system requires some complicated calculations to determine the spreader settings.

This tray test also only takes into account the right-hand side of the spreader, which is also home to the border spreading vane.

After adjusting the settings on the spreader, the CV actually deteriorated from 8.6% to 14.3%.

Why was that? Because some of the fertiliser gets diverted to the border vane the spread pattern is not symmetric. And although we repeated the process several times, we couldn’t correct the setting, leaving us to reset the original settings.

After the official tray test, the test teams decided to reposition the trays to the left of the spreader. The CV turned out to be slightly better, at 8.4%.

From this, we concluded that the instruction booklet was, in fact, wrong. Sulky has now changed this and recommends that operators use a left-hand side tray test instead.

Because of this, Sulky scored 2.5 in this part of the test – if we had used the correct method, the spreader would have scored 3.5.

The X12-44 follows standard design practice, with the weigh cell located between the linkage and the spreader itself, not integrated into a separate frame.

One further weigh cell is positioned in the middle of the machine. Unfortunately, mud can accumulate in the system.

Electric motors are connected to a spindle, so if they break the operator can adjust the machine manually.

The rear bumper doubles as a ladder and lighting is nicely integrated. Paintwork is good and welding is high quality.

A nice feature is that the agitator stops when the hopper opening is closed, so fertiliser granules don’t get ground unnecessarily.