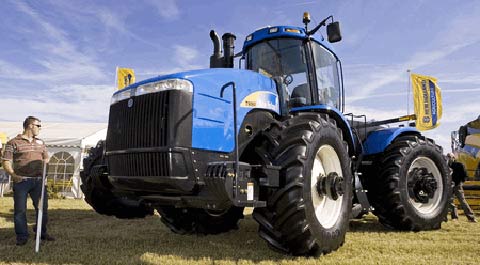 There is much to consider when buying a new tractor, beyond the number of spool valves needed or the multitude of gearbox types available.

For many the overriding priority will be how best to finance the purchase, while making the most of any tax allowances.

But with the advent of service packages and extensive after-sales arrangements there is far more to consider than simply horsepower and finance options.

How do you want to pay for your machine: Cash or finance?

Using your business’s surplus cash is likely to be the cheapest source of funding and provides you with the maximum flexibility in the way you buy, operate and sell machinery. While there is much to be said for cash, it often carries an opportunity cost.

A good argument against paying cash is that you would not pay three years’ wages in advance so why do the same for your machinery, rather than let it pay for itself from the income it generates for your business.

With 0% finance available from most manufacturers why use your own money when you could use someone else’s for nothing more than the arrangement fee?

While every business is unique, there are some straightforward questions that will help you decide which way to turn in selecting the right funding solution for your business.

Which is best for my business: Purchase outright, contract hire or leasing?

If deciding to purchase using external funds, the key questions are:

Depending on the nature of your business owning the machine may carry sufficient benefits to justify the cash outlay, such as having an asset on the balance sheet.

Conversely, its outright purchase may not be important if the business already owns other significant assets, such as land. In these circumstances it is often more important to know how much each piece of machinery contributes to the productivity of the farm or efficiency of an operation before deciding on which method to acquire a new machine.

Hire purchase agreements account for around 90% of new machinery finance in UK agriculture and represent a tax efficient means to purchasing a new machine, but following changes to the tax rules in April 2012 it would be wise to consider the benefits of other funding options.

In addition, the rise in machinery costs, due to exchange rate fluctuations and rises in raw material costs, and the volatility of incomes in recent years has led buyers to give greater consideration to other means of obtaining a machine for the job.

There has been a slight extension in the typical repayment periods as price rises have fed through,” says Robin Nicholson, regional sales manager for Agco Finance. “Whereas a machine would typically be financed over a three-year period we have seen that extended to four and in some cases even more years,” he says.

If owning the machine is not important or it is beneficial to have use of a machine at a fixed price then contract hire enables this while keeping the machine off the balance sheet. This has the benefit of the improving financial gearing of the business because the leased asset will not count as interest-bearing debt.

This off-balance sheet treatment is allowed because the residual value risk and the responsibility for disposing of the machine, to a third-party buyer, rests with the leasing company.

Publicly listed companies with shareholders to please often prefer to keep machines off the balance sheet because it reduces the cost of liabilities while making the return on capital employed look better. Similarly, large agri-businesses, utility companies and local authorities are keen on these products for much the same reasons.

After the hire period has expired (three years, for example) the machine is returned to the leasing company.

There is a third option, which fits neatly between hire purchase and contract hire: finance leasing. A lease agreement would typically have a minimum period of three to five years depending on the nature of the machine and its use.

Usually the full capital cost is paid during the primary period of the lease and it is possible to continue using the machine during a secondary period, but at a far lower rate. This lower rate is typically 1% of the purchase price for the remainder of the agreement which can be for up to 10 years. The principal benefit of leasing is that the rental costs paid are still 100% off-settable against business profits. At the end of the lease when the machine is sold or traded, the user receives the majority of the sale proceeds.

Have you recently re-evaluated your financial position in the light of the current tax regime and economic conditions?  While the £100,000 Annual Investment Allowance (AIA) available in the current tax year could offer a major tax efficient and cash flow opportunity, this opportunity expires at the end of the tax year.

The £25,000 AIA for the tax year beginning April 2012 still offers a cash flow advantage, but it is small and should not unduly influence the timing of your purchases, says Nigel Greenaway, marketing manager JCB Finance. “The real question is: do you have sufficient taxable profits to claim all of the capital allowances available to you?”

If yes The AIA offers a great opportunity to maximise cash flow and tax efficiency through the use of hire purchase.  With hire purchase, 100% of the first £100,000 of eligible expenditure can be claimed against taxable profits, just as if cash had been paid, even though the actual outlay in the first year would be considerably less. In a best case scenario it is the equivalent of HMRC paying back £40,000 – virtually equal to a 10% deposit and the first year’s annual repayments on a three-year HP agreement.

So how does it all work?

Imagine the following scenario: A partnership, having not replaced any of its machinery during the year, is rapidly approaching the end of its tax year and the accountant is fearful that a big income tax bill is looming. Even after claiming all available business expenses, a profit of £100,000 remains which would attract the higher rate of 40% income tax.

The accountant explains that if the partnership invests £100,000 in eligible replacement plant or machinery then the full £100,000 AIA will apply, even if purchased on the last day of the current tax year (advice will be needed where a business’ accounting period straddles two tax years as transitional arrangements apply).

Upon further investigation the accountant calculates that paying a 10% deposit (£10,000) and borrowing £90,000 over three years on a Hire Purchase agreement equates to a £40,000 outlay in the first year, followed by £30,000 in each of the subsequent years (net of interest charges).

The £40,000 expenditure in the first year equals the £40,000 tax bill saved – it is fair to say that HM Revenue & Customs has paid the equivalent of the partnership’s deposit and its first year’s HP payments. Not only that, but the partnership has managed its cash flow in an exemplary fashion – claiming the maximum £100,000 AIA but with an outlay of only £40,000 in the same tax year. Post-April 2012 and this same scenario will result in a tax bill of £24,600.

The moral of this story is that if you have plans to replace plant or machinery in 2012 – do it before April 2012. The plant or machinery has to be delivered and available for use in that business by the above dates in order to qualify for the tax relief.

If no Contract hire may be preferable because the hire company will claim the capital allowances and this will be reflected in the form of lower rentals. In time, if your purchasing requirements are small enough, or your profits are large enough, to allow you to fully off-set the capital allowances against tax, you can revert to paying cash or using hire purchase.