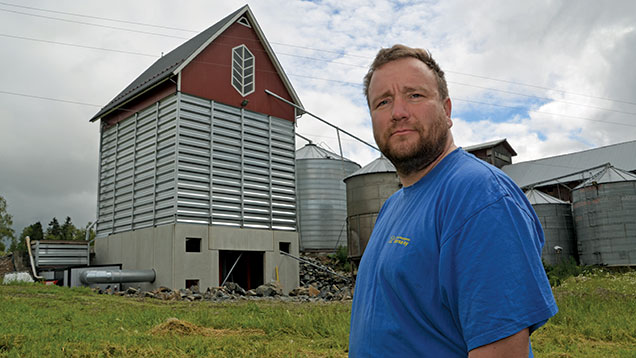 A Finnish farmer has slashed his annual fuel bill by installing a wood-fired burner to dry grain. Nick Fone reports

When Anssi Mennala took over the 170ha (420 acre) family farm 10 years ago it quickly became apparent that, on its own, it wasn’t sufficient to provide him with a living.

He either needed to go out and find another job to top up his income as many Finnish farmers do or find a way of expanding the business to the point where it could stand alone. He opted for the latter.

“It was initially really hard to find new land with no track record. However I was prepared to take on small patches of awkward ground that no-one else was willing to bother with and I quickly got a name with small farms where they needed someone else to do the work while they went out to earn a living,” says Anssi.

“With that approach we’ve built the area up to more than 400ha in a relatively short space of time. It’s brilliant because it means we can justify having decent tractors and machinery, but it also puts a strain on the rest of the equipment such as the grain dryer.”

Having doubled the cropped area between 2005 and 2012, the farm’s 40-year-old grain store was bulging at the seams. The old dryer was at the absolute limit of its capacity, struggling to process 1,000t of crop each season.

But still being a relatively small, fledgling enterprise it was difficult to justify investing in a brand-spanking new grain handling set-up at that stage. What was clear was the dryer needed a boost and, in a country where wood fuel is plentiful, it made sense to look at the options for using chipped wood as the energy source.

“I started looking at complete grain stores but it was just too much money. Then I came across a standalone woodchip-fired burner made by Finnish firm Antti,” explains Mr Mennala.

“Being containerised, it could be moved about with our hook-lift trailer that we already use for grain, would work as the heat source for our existing set-up and could then be transferred to a new dryer when we could afford it.”

So he took the plunge and bought the Antti BioHeater. Essentially a large woodchip stove with walking riddles and clever computerised controls, its 13cu m hopper holds chips and automatically feeds them into the burning chamber. The heat produced by the air-to-air heat exchanger is then blown to wherever it is needed by a monstrous fan.

In the first year the unit provided the heat for one of two aged dryers in the old store, working alongside one the one remaining oil-fired dryer.

“2012 was a bad harvest for us. Most of our grain was between 35-40% moisture when we got to it. Having the new burner meant we got significantly more through the old set-up and saved 50ha that we would otherwise have had to abandon.

“While the old oil-fired set-up chugged away steadily at its usual pace and burnt about 15,000-litres of kerosene, the woodchip burner absolutely flew and did the equivalent amount of work that would previously have used about 40,000-50,000-litres. It was the only way it could be cost effective to dry down from those ridiculously high moistures.”

That first season proved the point that the BioHeater was up to the job but it needed to be matched to a decent drying set-up to really fulfill its potential. So Mr Mennala then decided it was time to invest in a complete new bin store.

He got Antti to design a new 700cu m set-up with a 60cu m batch dryer at its core. The woodchip burner was then installed alongside with a bigger 18cu m hopper and a direct feed from the dryer’s dust and tailings extractor down to the burner chamber.

The stepped dryer has quite an aggressive cleaning and polishing effect which is used to help push up bushel weights. A high capacity fan is then used to adjust the amount of material removed during the process. Typically, Mr Mennala will run the fan flat out to get maximum grain quality.

This results in the volume of crop reducing by up to 10%. But because this is the lighter, less dense small grains and chaff, the weight of material removed is much smaller. However, it is still fairly energy-dense and makes excellent burner fuel.

“If we cut all our grain at 17% and dried it down to 14% we could do it all with dryer tailings and wouldn’t need to use any woodchip.

“But if we use tailings, it’s free. My plan is to start collecting grainstore cleanings from our neighbours – it will help them in getting rid of a waste product and we’ll get free fuel.”

Being something of an entrepreneur, Mr Mennala is keen to get maximum payback from his investment and hires the hook-lift woodchip burner out as a giant space heater for events throughout the winter.