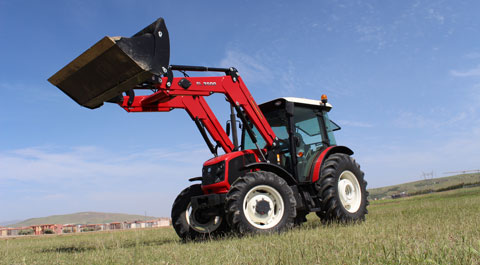 Farmers looking for a simple livestock tractor could soon have a new name to add to their shopping list – Armatrac.

The fledgling Turkish maker is in talks with UK and Irish dealers and should be selling its range of 50 to 110hp tractors in the UK by the end of June.

These will be pitched at the competitive mid-range market, which means luxuries like air-conditioning and fender switches will come as standard. There’ll be a price to match, too, with the top-spec 110hp tractor costing about £40,000.

We spent most of our time in the 110hp machine as this is most likely to appeal to UK farmers.

One of the big attractions with the Armatrac is the list of quality components under the panels.

The first of these is the engine. For the home market Armatrac is using a dependable, four-cylinder Perkins block that pumps out about 110hp.

When it hits UK shores this will be fitted with a diesel particulate filter and EGR unit to meet our tighter emissions regulations.

Armatrac is also toying with the idea of offering farmers a Deutz powerplant instead.

We only got to have a go with the Turkish-spec Perkins, which seemed gutsy enough when we had the plough on the back.

Smaller tractors and the more basic big ones will get a three-range Carraro gearbox with four speeds in each.

Shifting between forward and reverse is an old-school, clutched affair using a gearstick on the right or left of the seat.

The synchro shifts within each range are pretty sweet, but you have to make sure you’re at a standstill before changing direction. Otherwise you’ll be treated to a wince-inducing crunch.

The higher-end option is a ZF box that Erkunt builds itself under license. This has two ranges of four speeds with a hydraulic splitter. Forward and reverse is still manual in this box and because it’s on the furthest gear lever, it’s a bit of a stretch.

The range change is also pretty clunky and uses a strange stubby lever coming out of the floor.

Again, the speeds within the range are slick enough and the button for the splitter is handily placed on the main gear lever.

It’s fair to say that both boxes are a tad crude, but on the plus side it means there isn’t much to go wrong.

Armatrac’s cab is very Massey-like, with plenty of glass and no big pillars to get in the way.

It’s also got the same rounded rear quarter lights that open up to let the fresh air in.

Inside, everything looks tough, basic and has the sort of finish you’d happily sluice down with the pressure washer. It’s spacious though and has a few flat ledges for balancing your coffee cup and lunchbox.

But when it comes to witches and levers, things get a little haphazard.

The clunky pto speed levers have been bolted under the seat in just the right position to take the skin off your ankles. And the spools are grouped so closely together that even the boniest of hands will struggle grip them.

Thankfully linkage control is better. This is handled by a set of Bosch electrics that put all the important bits – depth and draft control, position and response – neatly to hand. The panel could have been mounted a tad higher up though.

Having air conditioning as standard is a nice touch and the fans had plenty of grunt to keep the cab cool, even in Turkish temperatures.

Placing the vents in the cab roof wasn’t the best choice for a loader tractor, though, as it’s hard to see attachments when the loader is at full height.

Higher-spec models are also treated to an air compressor for pumping up tyres and powering a handy air line in the cab.

All in all, it’s not a bad cab for a lower-end tractor, but some of the controls could do with a bit more thought.

Armatrac is also going to be offering its own branded loader. This is built by a Turkish engineering firm and looks like a quality product. The only problem was that is seemed a bit sluggish on the tractor we drove, even though it had a 65-litre/min? pump.

The cable-operated joystick was smooth and easy to use and we liked the fact the soft ride kit comes as standard.

For those looking for a simple solid tractor that does away with electronic jiggery-pokery, the Armatrac could be goer.

It’s built using top-quality running gear and is put together by a manufacturer that makes parts for almost every big player in the tractor game.

If they turn out to be as reliable as they look on paper they could build up a bit of a following in the UK. But with plenty of other better-known players in the same price bracket, it’s going to be a tough battle.

Armatrac is the export name for Turkish engineering firm and tractor builder Erkunt Industries – the rebrand was probably a wise move.

The firm was established in 1953 and until recently its main enterprise was making cast parts for cars and tractors.

In 2003 it decided to start bolting some of these bits together and start selling under its own name.

Erkunt is now the third largest tractor builder in Turkey, out of a whopping 32.

The number one maker is Koc, which makes some of the smaller CNH models. It is 70% owned by CNH and has a 48% market share. It does not sell them in its own livery, though. Tumosan takes second place with a 15% share, followed closely by Erkunt on 12%.

Erkunt makes about 6,000 tractors a year and sells most of these to the home market. However, it has growing markets in Northern Africa and Bulgaria and the factory is capable of building as many as 15,000 machines a year.

Erkunt also says it’s the first Turkish tractor maker to attempt to sell tractors in the UK under its own name.