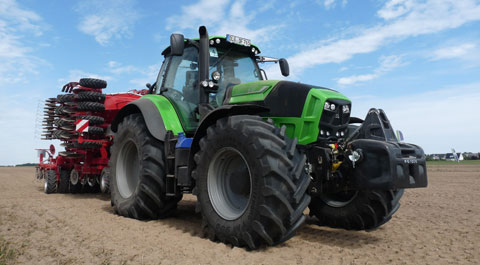 If first impressions are anything to go by then the 7-Series looks like it should be a real contender in an already competitive horsepower segment.The ride is comfortable and the layout and looks of the cab are a huge improvement.

Controls are easy to reach and displayed pretty clearly on both the pillar-mounted screen and I-Monitor.

Same Deutz-Fahr’s assault on the high horsepower sector has been a steady one.

Before this summer there were just two lime green tractors able to muster more than 200hp – the Agrotron TTV and full-powershift L730.

But this year the Italian-owned company has bolstered the ranks with three new six-cylinder tractors. All have smooth-as-you-like CVT transmissions coupled to engines that will boot out anything from 220hp to 265hp.

To accommodate that extra grunt, wheelbases are longer and transmissions are beefier than any previous Deutz offerings.

Squeezing more tractors into its product range has been reflected in market share figures, too. The Italian-owned manufacturer has stolen an extra 1% over the last 18 months, taking its share of the tractor pie to 4.1%.

The new 7-Series tractors are littered with improvements over previous Deutz TTV models. Most notably, styling has transformed the Deutz from somewhat of an ugly duckling to a real catwalk contender.

The six-post cab, bonnet, lighting and fenders have all gone under the knife after the Bavaria-based firm teamed up with a Volkswagen-owned design company. While it might not look anything like a Golf, the tractor has been given a more racy look.

Under that long nose is a Deutz 6.1-litre six pot.

That’s smaller than the 220hp L730’s 7.1-litre, but seemed ample enough in work (on our sandpit of a test field, anyway). The bigger 435-litre fuel tank should mean there’s enough juice for a day’s work, but it does leave near-vertical steps for an Everest-like climb up into the cab.

All 7-Series tractors are Tier 4i compliant, with SCR being the emissions control of choice. Figures suggest the motor will use AdBlue at a rate of 8-10%, which seems higher than rivals’ tractors. When the 50-litre tank empties engine power is cut by 30%.Deutz has also made changes to the cooling pack. A fold-out affair, the company reckons it is the most accessible on the market. It opens in two sections so should make life pretty easy with the air line.

Given that these tractors are its biggest yet, Deutz has felt the need to add a bit more muscle to the transmission.

Beefed up gearing should handle higher torque pressures and racing around at 60kph comes at a lower rpm. And like all seamless transmission tractors on the market, you can drive in manual, auto or pedal mode.

For steady tillage work there are also two cruise speeds on the joystick. These can be overridden at headlands by stomping on the pedal or a nudge of the stick.

The dishwater-dull interior of earlier Deutzs is gone – things have undergone a turnaround almost as drastic as Stratford and Hackney’s Olympic smarten-up.

Climate control knobs get a touch of chrome and have moved into the roof lining alongside a five-button blister pad for the lights. The steering column and dash now moves as one piece, too.

The cab does feel tight for space, though. That’s partly because of the wide armrest and an even wider passenger seat that should accommodate all but the widest backside. That said, the cab is definitely comfortable.

The interior is dominated by the huge armrest. Tweaking one of the umpteen knobs on it will display changes on a screen on the A-pillar.

Previously a basic LCD screen, it’s now colour and controllable via an armrest mounted dial. It displays things like speed and drive mode and can also be used to manage the four double-acting spools (seven are available should you specify them).

The controls for the spools are spread far and wide. Three can be controlled by chunky paddles, two are mounted on the cross lever, while a further two controls are positioned on the handstick.

The handstick is also home to a forward/reverse function. This can only be used if the left-hand shuttle is in neutral. All tractors are kitted out with an electronic handbrake. Come to a halt and it will engage, but will release again should you drop a toe the throttle.

Also new to the Deutz range is the 6-Series. Extending from 140-190hp, it sandwiches Deutz’s key horsepower sector. Tractors are only available with a four-speed powershift transmission at the minute, although TTV versions are expected to appear next year.

There are four six-cylinder versions and two smaller wheelbase four-cylinders. 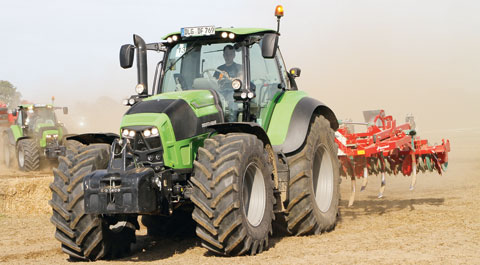