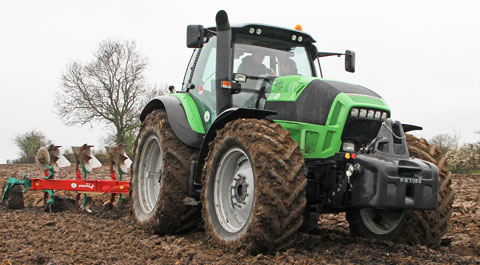 The L730 is a solid tillage tractor and you get plenty of power and lift for your money. With all the controls neatly stacked on the side panel and armrest you get a great view out of the 200hp greenhouse.

Once you get passed the complicated transmission it’s pretty easy to get-on-and-go. It will be interesting to see how it does, though, because convincing buyers to switch from tried and tested tractors is tricky business.

Deutz is hoping to ruffle a few feathers in the 200+hp category. How, you might ask? Well, the Italian company has introduced its first full powershift for nine years and now offers a middleweight tractor range that could really stand up to the big boys.

The new powershift has come some way from the 3 x 9 speed box of the early Agrotrons, thanks to some help from transmission specialist ZF. The nine-speed creeper range and two 12-speed powershifts mean the L730 slots nicely between the semi-powershift box of the M-series and seamless shuttle of the Agrotron TTV.

That’s not all, either. The Deutz designers have been beavering away redesigning the front end. At first glance the one-piece hood somehow resembles Pinocchio’s famed facial feature. It’s big (and long), but does offer some good access to the engine bay.

There’s still no Stage 3b engine – so no need to worry about AdBlue – but Deutz reckons it will have arrived by 2013. Any change might pump up the asking price by a few thousand pounds.

Under that protruding nose is a 7.1-litre Deutz common rail. It’ll kick out 213hp as standard and power boost takes it to 220hp.

The six-pot powerplant produces max torque at 1,600rpm, and 50kph comes at 1770 rpm. In work it certainly doesn’t lack any grunt and tootled along with five furrows on the back.

There are three working ranges. Nine creeper gears – engaged by a clunky, red-handled lever behind the seat – provide snail-like-speeds up to 2kph.

The other two ranges – work and transport – get 12 splitters and are selected via the armrest joystick. We like the flexibility of the work range which extends from 2-19kph, so when you’re on field duty there’s no need to change up to the transport pack when you want to get moving.

Severity of the shuttle-shift can be adjusted on a thumbwheel on the forward/reverse stick and there are three transmission modes depending on how you want to control the gears:

Allowing the gear changes to be controlled automatically should select the best range for the job, but we found it struggled to make its mind up when on the road and jumped from gear to gear too regularly. Deutz says some engine and transmission changes should mean this won’t be the case on tractors built for the UK.

The S-class cabin is almost identical to that on TTV models. Changes in the cab are restrained rather than revolutionary.

It’s slightly more old school compared to a lot of its 200hp rivals, but that’s not a bad thing.

Deutz has opted for an increasingly endangered species – the six-post cab – so there’s the luxury of some sweat-relieving side-opening windows.

Thin pillars and curved glass make it feel spacious and there’s a big glass sunroof which lets in even more light and air.

Inside it’s pretty plain Jane. Deutz has again opted for a less-than-striking shade of tower-block grey on the floor, panels, pillars and dash. It’s got a bit of a 20th century feel to it and lacks some of the glamour of rivals’ interiors.

The company reckons it’s cut noise levels in the cabin thanks to some sound-sapping roof lining and floor mat material. At 72dB it is supposed to be one of the quieter ones on the market, but you can certainly hear the unmistakable growl of that Deutz engine up the front. Before gear changes in auto mode we found it pretty raucous.

The dash shows the usual information and there’s a handy-but-small LCD screen on the right-hand pillar. It’ll tell you which range and gear you’re in, which gear is preselected and the current drive mode.

There’s still a power-shuttle stick on the left of the steering column, while on the right an electronic parking brake has taken the place of an indicator stalk. An alarm goes off if you leave the seat for more than three seconds, which is annoying but makes sure you remember to put the handbrake on.

Most of the controlling is done through an oversized joystick. It could do with a session on the Slimfast if it’s going to be anything like comfortable to hold, but it handles all major transmission functions efficiently enough.

Pride of place in the cab is Deutz’s own I-Monitor on-board computer. Having debuted on the TTV 630 a couple of years ago, the computer gets a thumbwheel for scrolling through and five quick keys to nip in and fine-tune different functions.

The home screen serves up all the key information clearly during work and you can delve into more information should you like. Fuel, engine and transmission information is displayed here and there’s also an Isobus connection so implement data can be displayed on the screen.

A good measure of the usability of an on-board computer tends to be setting up the headland management. The Deutz scores well on this front and functions are pretty easy to programme.

In possibly the worst day of 2012 to draw a furrow (4 April), we hooked the L730 to a five-board Kverneland plough and made a start on some disked-in compost.

As we expected, the five-furrows were no match for 220hp, even when the rain, snow and hail hit. We bid a hasty retreat in the end, leaving headlands turns looking like the battle ground of two testosterone-fuelled bull elephants.

But even on a greasy surface the Deutz managed to put that power to the ground. The 1t weight tacked on the front helped, but it put in a solid performance nonetheless. With 10t rear lift, it’s definitely built for serious tillage work.

The I-Monitor screen keeps you up-to-date with what’s going on underneath – displaying wheel slip (key in our situation) on a graph. We found the hydraulic lock a bit of a pain, though – a hold-and-press job which locks itself too regularly.

Transmission-wise we found it was easiest to work in manual so that you get complete control of engine rpm and forward speed.

The Deutz is less competent on the road. We struggled to get to grips with the transmission, particularly in automatic mode and it seemed jerky and laboured while scooting along unladen.

Deutz assures us that the speed of changes can be adjusted in the factory and full-scale production models should be better.

Switching from auto to manual can be done on the move by pressing a button on the joystick. Happily, this is much more responsive and pushing the joystick forward fires you rapidly up through the 12 stages.