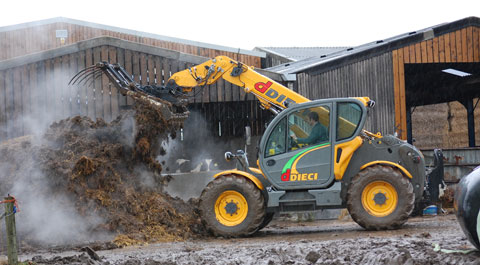 Dieci isn’t a well-known name on British farms and many people might reasonably assume it was the name of an AC Milan footballer. In fact, it’s one of Italy’s best-known telehandler manufacturers.

While all 10 models use the same Iveco four-cylinder, turbocharged, 125hp engine, the Agri-Plus 40.7 and 38.9 models are available with a choice of either a 4F/3R powershift gearbox or a Sauer-Bibus three-range hydrostatic vario transmission. The Agri-Tech 35.7 and 32.9 models are available only with the vario.

While Dieci hasn’t opted for a ground-breaking design with the Agri-Plus range, it does have several natty features. The Agri-Plus 40.7, for example, has a clever two-point boom design, a novel levelling compensation cylinder system and 146o of bucket oscillation.

The demo model used for this test was well kitted-out with a 40kph transmission, boom suspension, selectable steering and boom modes, a reversible engine cooling fan and a useful oil pressure-release switch for the (auxiliary) hydraulic connectors. It was also nice to see a supplementary hydraulic pump, which boosted lift cycling time by 30%.

The cab looks well constructed and the interior is nicely trimmed. Visibility is good, too, even at full boom height. The driver’s door has a large electric window and the gauges are informative and easy to read.

The driver’s seat is firm and supportive. It’s mounted slightly higher than in some rivals so the operator gets a relatively good view of the working area. The well-protected undercarriage suggests there’s not too much danger of damage under there either. 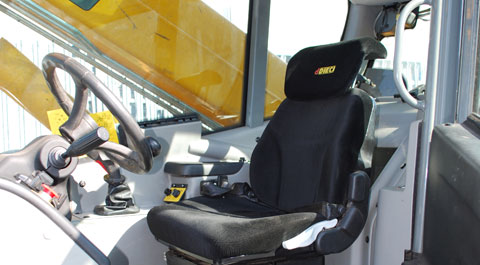 Starting the engine is followed by a 10-second lag as the engine control unit performs its systems checks, so not much happens until the warning bleeps stop. A traditional left-hand shuttle lever engages the drive and the Dieci pulls away progressively as throttle is applied.

This is not a machine that will roar off and catch you out – it’s more like driving an automatic car. The good news is that it’s very controllable, making it potentially a good bet for pallet or potato-box work, and engine grunt is impressive. Less good is that it needs a heavy stab with your foot to get it going. 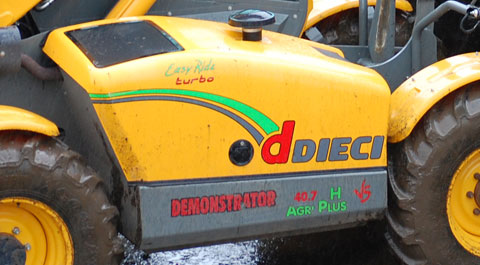 Our task was to remove muck a metre deep from cattle yards with restricted access… in pouring rain – a test for any telehandler. The Dieci did a good job in converting engine power into traction, whether skating around on concrete or mauling huge grab-loads of muck across undulating ruts filled with stone and brick-ends to reach the trailers.

The Agri-Plus is a pretty big machine for these cramped barns, but a tight turning circle helped reduce any unnecessary shunting.

The next task was to tear out some well-trampled manure. The Dieci’s meaty 7.7t weight and grip meant it was able to tackle quite tough, heavy patches without having to manoeuvre the machine with its rear wheels in the air.

The hydraulic system will allow boom retraction only if the maximum lift capacity is exceeded, so pushing the 40.7 to its lift limit was never a problem. At no point did the stability of the loader feel compromised – even when it was retrieving wet straw bales from the top of a stack at full reach.

Boom and bucket control with the console-mounted joystick is excellent, although the design of the safety switch could be improved. The door mirror is poorly positioned and we would like to have seen a rear mirror on our test vehicle. Otherwise, it’s a well-sorted machine.