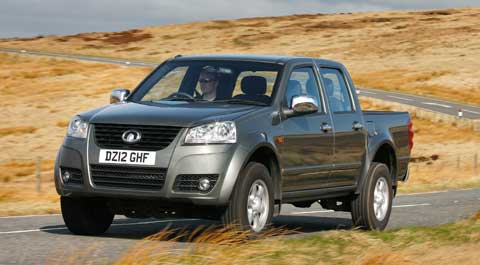 The Steed may have an old-fashioned and slightly crude feel to it, but it looks capable of coping with regular farm duties. Some of the fittings were a bit cheap, but the basics (ride, noise, off-road ability) were fine.

Unless you have a particular interest in the Chinese automotive sector, you probably won’t have heard of Great Wall. It’s a vast (though privately owned) company that’s been making pickups since 1976 and the curiously named Steed pickup has been on sales in places like Australia for three or four years.

The current model got new engines, a new six-speed gearbox and cosmetic changes last year and is now on sale in the UK. Some 40 dealers have been appointed, says importer IM Group, which already imports Subaru and Isuzu vehicles.

Its £14,000 price-tag, which is roughly £3-4,000 less than an equivalent machine from one of the established pickup makers, is undoubtedly attractive. But, we wondered, will the Steed’s build quality and potential longevity be up to scratch?

It may not have the racy good looks of a new Ford Ranger or Isuzu D-Max, but there’s nothing ugly about the Steed. A little anonymous, maybe, but then that’s true of many pickups.

Only doublecabs are on offer and the truck is about the same size as a previous-generation Isuzu, Hilux or Nissan.

Quality-wise, the Steed a mixed bag. No problems on the outside, where panel gaps are pretty uniform and everything seems well screwed together.

However, step inside and you quickly remember this is a budget truck. Some of the plastics are fine, but on the dashboard and around the gearstick they have that curious shiny, 1970s look to them.

Some of the door panels flapped a little, too, and the otherwise-well designed centre storage unit wobbled and quivered like a worried politician. But, overall, the quality of trim and fitments was rather better than we expected.

Leather seats are standard on both spec levels, which seems a bit unnecessary for a working vehicle. But they were comfortable and the seating position was fine. Equipment count is high, too, with heated front seats, Bluetooth/MP3, alloy wheels, immobilisers and air-con on the S model.

Splurge out on the SE and you also get a hard top, cargo area liner and rear parking sensors as well as those daft chrome sidebars.

Knee-room was adequate in the back of the Steed and access through the rear doors was fine. There are three seat belts in the rear but sadly no under-seat storage compartments.

While most pickups on the market have 2.5-litre engines pushing out anything between 150 and 200hp, the Steed seems happy enough with its two-litre engine and 143hp. Progress is stately rather than speedy, but our unladen truck sauntered along country roads at an unexpectedly brisk pace.

Engine noise isn’t too bad either. Even at 80mph my co-driver and I were able to keep up a conversation without having to bellow.

Transmissions are all BorgWarner six speeders and it didn’t require much pressure to get the stick from one ratio to another.

No levers here. Instead, buttons high up on the dash bring in 4wd high and 4wd low without drama. On the MIRA 4wd track, the Steed coped with everything that was thrown at it, with pretty good water wading, axle articulation and muddy hill climbing.

• Would you buy one?

While farmers tend to be wary of unfamiliar names on the pickup market (remember Tata?) importer IM points out that the Steed has been on sale in Australia for nearly four years.