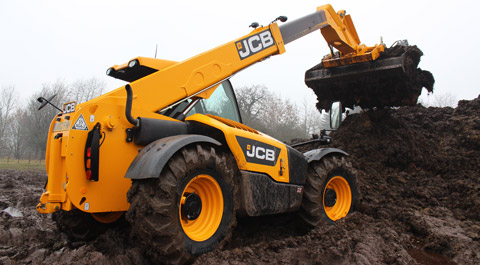 This model should appeal to arable producers who want high capacity, but don’t want to go quite as big as the hefty 550-80. Like all Loadalls it’s available in four spec levels that involve different combinations of engines and equipment.

The most popular is likely to be the 125hp Agri Super, but our test machine was the fully-loaded Agri Xtra. This has 145hp on tap and various creature comforts like boom-end damping and a heated seat.

The engine is clearly the biggest change to the Loadall range. Out goes the old Dieselmax block and in comes the Ecomax. This uses all sorts of cleverness to drive down emissions and help squeeze a few extra hours of work out of the tank.

There are three versions of the new four-cylinder engine – a 109hp version that will be fitted in more basic machines, a 125hp unit for the bulk of the workforce and the beefy 145hp one for those that do a lot of towing and clamp work.

Interestingly, the mid-range engine has five fewer hp than the old one, but JCB reckons it has just as much grunt. That’s partly because it develops 4% more torque and partly because the machine’s been fitted with a number of power-saving features.

The first of these are the high back off brakes that apparently reduce drag by keeping a bigger gap between the disc and pads. The variable speed fan also helps as it clicks in and out when the engine needs it rather than running constantly.

Higher-end models also have an automatic torque converter lock in gears five and six to make them pull better on the road and use less fuel.

Because JCB has managed to get round emissions rules without using diesel particulate filters or AdBlue, there aren’t that many extra bits and bobs clogging up the engine bay. This means most filters are easy to get to and the bonnet stays nice and low.

The 541-70 uses the same tried-and-tested six-speed powershift as the old machine but the shifters are now much slicker.

Instead of the clunky twist grip on the forward/reverse shuttle lever, JCB has added a couple of neat-shifting buttons on the top of the main joystick. That means your left hand is free for waving at pretty girls or gesturing at impatient motorists.

It also gets a transmission dump on the brake pedal for the first time meaning you don’t have to knock it into neutral when you want to rev up and move the boom in a hurry. This can be turned on and off via a switch on the dash.

The cab is pretty similar to the old one, but it’s had a few tweaks to make life better for the driver and harder for thieves.

Some people complained that the fans in the old Loadall were a bit asthmatic, so JCB has fitted much more powerful ones. These set off a minor tornado in the cabin, which keeps you nice and cool, but on faster settings it’s like being next to a Harrier jump jet at take-off.

It’s also a good move from JCB to keep the left-hand forward reverse shuttle – not everyone likes using the joystick flick switch.

The new digital dash is also pretty easy to see and the switches are a bit simpler to fathom, too. It’s also been given a proper upper door catch.

Security has been improved considerably thanks to a new chipped key system. Each telehandler is issued with one unique master key that the owner can use to programme a series of drone keys. All he needs to do is slot the master key into the ignition, wait for a light to come on and then slot in each of the drone keys he wants to programme. The master key is then kept in a safe place until more drone keys are needed. 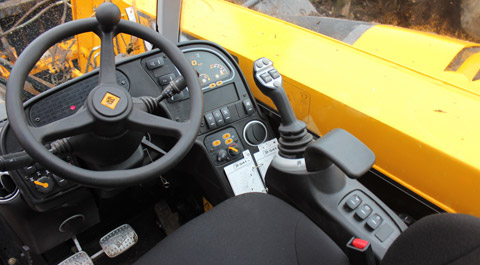 From an operator’s point of view the new Loadall isn’t wildly different to the old one. But there are several thoughtful tweaks that do make it slicker to drive – particularly the joystick-mounted gear shifters and the transmission dump switch on the brake pedal.

We also like the fact the fan now blows air up out of the bonnet, rather than blasting it on to the ground and causing a massive dust cloud.

The promise of better fuel consumption is welcome, too.

JCB has given its pivot steer machines a bit of an update, too. The TM320 and TM320s can lift 100kg more than the TM310 models they replace and they’ve been given the same 125hp and 145hp engines and as the Loadalls.

Cheaper TM320 models are more of a general use machine and come with the 125hp block. They have a 140 litre/min hydraulic pump as well as torque lock in gears four to six.

TM320s machines, however, get the pokey 145hp engine, a more powerful 160-litre/min pump and torque lock in gears two to six. This should make them go better on a silage clamp as they can lock the torque converter at lower speeds. 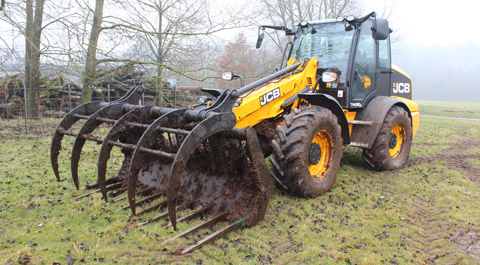