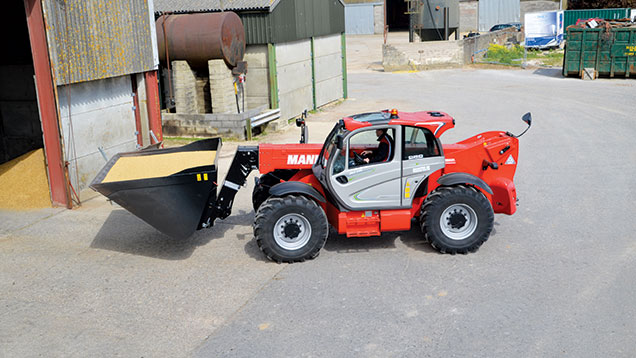 For many years telehandlers with 3-4t lift capacity had more than enough muscle for the average farm task, but huge on-floor grain stores and AD plants are demanding a new breed of load-lifters.

To try and quench the demand for these monster machines, Manitou has launched a loader with more lift capacity than it has ever offered before.

Its previous biggest was the MLT 845, which now looks a complete pussycat compared with the 960.

As the name suggests, it will wrestle a whopping 6t load up to 9m.

Why have telehandlers gotten so much bigger?

Demand is mainly coming from farmers dealing in woodchip and biomass that need machines capable of shifting huge quantities of material.

There’s also the small – and slightly boring – matter of EN15000, which is the safety system all new telehandlers must be fitted with.

Most of the manufacturers go about things slightly differently but the end result is generally the same.

It means operators can’t push a machine to its limits quite like they could previously, so farmers are having to buy a bigger machine to do the same job, albeit in a safer fashion.

Despite all that, the big telehandlers are still pretty niche products.

The more modestly-sized 629 and 634 machines remain the most popular models in Manitou’s range.

How is the telehandler market shaping-up?

Like all farm machinery markets, telehandler manufacturers are feeling the pinch at the minute.

JCB remains number one by some distance, followed by Manitou, Merlo and Claas, though Italian maker Dieci is also starting to make noises in the UK.

Manitou claims it is all-new from the ground upwards, but that is not strictly true.

The 960 is built in Manitou’s Italian factory and has been converted from the construction side of the business.

However, to make sure it suits farm life it has pinched a few familiar features from the MLT 840 launched a couple of years ago.

One thing that has changed is the size. To cope with the burden of extra weight it has got a new, beefier chassis.

It is also noticeably longer, wider and taller than the 840, which plays-out in the 30cm wider turning circle.

John Deere remains the engine provider for the 960 and two of Manitou’s other biggest machines – the 840 and 1040. Elsewhere, Mercedes powers the 845, Deutz engines are in the mid-rangers, while the popular 629 uses Perkins power and Kubota propels the smallest.

There’s also a new hydrostatic transmission, which is built by Dana Spicer.

Why use a hydrostatic?

While the big selling point of the 840 was it’s 5×3 powershift box, Manitou has changed tack for the latest model.

Smaller machines stick with the tried and trusted torque converter, but the company claims its new stepless gearbox is lighter, smaller and better suited to the 960.

The new gearbox is also rated to handle the extra horsepower provided by the tuned-up Deere engine.

The transmission has two modes, though slightly iffy backlighting makes it difficult to know which of them is engaged.

The first is a low forward speed, high torque set-up for extra pushing power and a bit more control. Above 12kph it uses a clutch to disconnect one of the two hydrostatic motors to increase forward speed but reduce torque.

We only had a limited time on the seat so it was difficult to notice any significant differences between the two, but get stuck into a steaming muckheap and the results will no doubt be more clear-cut.

Has it got the power?

It is the same engine as used in the 840, but is tuned to deliver a little more firepower this time around.

Despite Deere tractors now getting AdBlue to deal with emissions, Manitou has so far avoided that extra inconvenience. Instead, EGR and a filter deal with the 960’s smutty emissions.

The cab will be home-from-home for anyone that is well-acquainted with the 840.

That means it’s weirdly long, but with an enormous parcel shelf at the back at least there’s space to take your wolfhound to work with you.

As well as the boom and headstock it controls the F/R shuttle, which is easier to get used to than you might imagine. The one-piece door also looks like it’s here to stay.

What about the hydraulics?

The 960 also gets the same 180-litres/min variable displacement pump as the 840, with dials to adjust the flow to the two auxiliary couplings at the front.

It has a noticeably good range from tilt to crowd, which should mean less bucket shaking is required when tipping muck.

That can only improve the life expectancy of the headstock kingpins.

It is also worth noting that hydraulic locking pins aren’t part of the standard package, which seems a little on the stingy side for a machine that costs the fat end of £100,000.

The rules about safe loading of telehandlers might be boring, but they play a big role in machine design.

The 960, for instance, has a single ram on the rear axle which locks-out near the top of the lift arc to improve stability and there are two modes that block certain hydraulic functions when the machine reaches its safe working limits.

The overload limiter also kicks in frequently, so you do need to be in the correct mode if you’re going to get anything like the most out of the machine.

There’s certainly a market for these machines but there are just too many settings on the 960.

We like the power and some of the cab features, but the rules around EN15000 mean it all comes in a very complicated package.